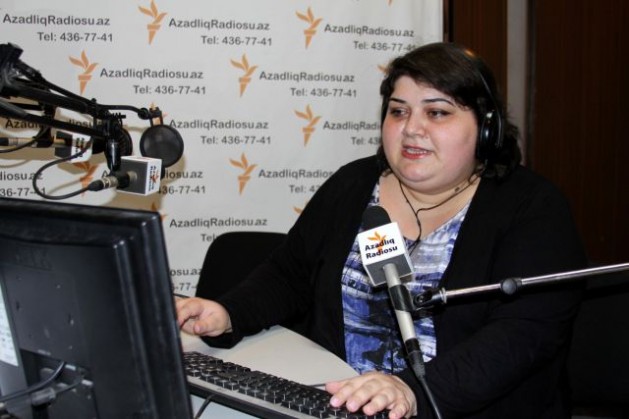 UNITED NATIONS, Nov 12 2012 (IPS) - Khadija Ismayilova has been threatened with blackmail by her own government. She has been branded an “enemy of the state”, mainly for her exposés of official corruption.

Not only did these persecution campaigns fail to silence her, but Ismayilova recently received international recognition with the 2012 Courage in Journalism Award given by the International Women’s Media Foundation (IWMF).

The award is handed out annually to three women journalists who have “demonstrated extraordinary strength of character in pursuing their profession under difficult or dangerous circumstances”. This year’s recipients also include Asmaa al-Ghoul, a freelance journalist from Gaza, and Reeyot Alemu, an imprisoned Ethiopian columnist.

Ismayilova spoke to IPS correspondent Julia Kallas about the state of investigative journalism in Azerbaijan and the support her reporting has received from the country’s largely conservative society. Excerpts from the interview follow.

Q: So the government tried to blackmail you and you turned the tables on them. Can you describe what happened?

A: What happened is that I have been doing an investigation on the high-level corruption of the president’s family and family members involved in state-funded contracts. And how the president’s family members benefited from the public opportunities by passing regulations and laws. So through this investigation I reviewed their offshore company in Panama (in) which they are hiding their names and their interest in public funds.

So basically after this investigation a camera was planted in my apartment. There was surveillance for a long time in the apartment that I was renting and they filmed me having sexual relations with my boyfriend and then they sent me pictures of the footage. They demanded me to behave. I decided not to ‘’behave’’ as they asked. I decided to go public with that and I said I have nothing to be ashamed of.

Those who are stealing from the public, from the people, should be ashamed of what they are doing. So that is why I decided to continue my investigation.

Q: The Atlantic called you one of the only investigative journalists in Azerbaijan. Is this true?

A: There are other investigative journalists. But there are only a few of them highlighting the top corruption issues. There are very few. I can name two or three, but that is it. They are very brave people.

When I received the award from IWMF, I said I was receiving this award on their behalf as well because they have also been doing a very difficult job, and very brave journalism. It is very important that I am not alone in this because when you are alone, you become the main target for the government.

Like Elmar Huseynov, who was killed in 2005. He was the only one doing that. He was killed because the government knew that once he was not there, there would be silence, and there was silence for many years before my investigations started coming.

The difference between our work and the work of others is that we are making up to the highest international standards. All the investigations are very well documented. Every statement, every allegation is proved, confirmed and documented.

Q: What is like being a female muckraker in such a conservative society?

A: I have never thought about being a female and not being able to do things that I want to do. I do not think that gender matters. But when they want to punish you for being a muckraker, they use the conservative feelings of the society against women. They try to talk about the rules for women, like how women in Azerbaijan are not entitled to have sexual relationship.

But when I was blackmailed the society proved to be much more liberal than the government. Society supported me and showed that they appreciated what I am doing.There were statements even by the most conservative parties of the society, like the Islamic parties. They said that interference into privacy is unacceptable and it is also unacceptable that the government was using very unethical attitudes to silence a journalist.

Q: When they tried to blackmail you, instead of keeping it secret you posted a message to Facebook. How important is social media in the new era of journalism, and how free and open is Internet access in Azerbaijan?

A: Social media has a great role. I have more than 4,400 friends, more than 5,100 subscribers on Facebook and more than 2,000 followers on Twitter.

I communicate most of my problems through social media, as traditional media in Azerbaijan is largely under control. That is why I posted my message about blackmail on Facebook first.

The case of blackmail was reported only by one TV channel, which reported news about a journalist being blackmailed with a sex tape, but didn’t dare to tell its viewers what kind of stories this journalist was writing. My stories in fact got a larger audience thanks to the new media. A significant part of our website comes from Facebook.

Q: Do you ever worry that the harassment could escalate? And do awards like this provide any protection, in terms of international recognition of your work?

A: Absolutely. As I continue doing my job, I think the government will look for other ways to silence me. But I prefer to concentrate on my job, as it doesn’t make sense to worry about threats. I can’t control their desire or means to do something to me. So worrying doesn’t do any good anyway.

Awards like this bring more protection, as it brings international attention to my case. So hopefully the government might hesitate to do something. But it also has a great impact on future generations. With these awards they understand that investigative journalism is not only about troubles. It is also about recognition.