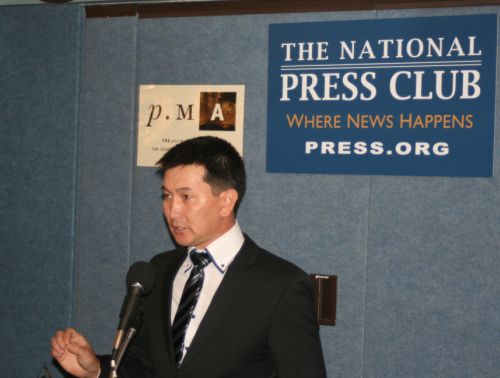 WASHINGTON, Oct 26 2012 (IPS) - Lukpan Akhmedyarov, a 36-year-old reporter for an independent weekly in western Kazakhstan who was recently ambushed and nearly killed, was awarded the Peter Mackler Award for Ethical and Courageous Journalism this month – the first journalist from that country to receive international recognition in 10 years.

An examination of his articles and the lawsuits they triggered reveals an unusually detailed picture of why Kazakhstan, a nation blessed with ample natural resources and a president, Nursultan Nazarbayev, who covets the Nobel Peace Prize, is 154th out of 179 countries in Reporters Without Borders’ press freedom index.

Over several long interviews with IPS in Washington, Akhmedyarov described the stories written for the Uralskaya Nedelya (Uralsk Weekly) paper that had generated lawsuits. They reported on police corruption, rampant nepotism, rigged tenders, how 1990s racketeers are now senior government officials, and how disqualified referees keep on refereeing.

His story illustrates claims by human rights monitors that Kazakhstan, whose official line is that it is inching toward democracy at its own pace, has in fact been doing just the opposite since its economy stared booming a decade ago.

The Kazakhstan International Bureau of Human Rights recently reported that in the area of freedom of expression, of “particular concern” were increases in libel lawsuits against newspapers and journalists and physical attacks on journalists.

“Before, (President Nursultan) Nazarbayev was stronger and he cared about his image,” Akhmedyarov said. “You could criticise anyone except him and his family. Now he’s weaker and there’s more money around, so the local bosses depend less on him and they’re getting more and more control over the courts.”

The saga starts in 2006, when a newly hired police officer with a law degree named Marat Sagitov discovered soon after taking over a staff of 16 street cops that they each had to collect 2,000 dollars in bribes each month and hand over the cash to Colonel Kuantay Uteshev, known as the “black Colonel”. Sagitov ordered the 16 policemen to write detailed, signed depositions and mailed them to the region’s governor, leaving a copy on a government website.

Directed by a tip to the internet URL, Akhmedyarov interviewed Sagitov, examined the depositions and wrote a story. A few days later, Sagitov was in jail on charges of corruption that Akhmedyarov said were obviously false. Then the police department sued the reporter for libel.

The plaintiff won on appeal but the suit that was dropped only when a new governor took office a year later.

“Everyone knows the police are corrupt, but it’s very unusual to publish so many details with names, amounts and places,” Artur Shakhnazarian, a journalist in Atyrau, the regional capital, told IPS.

After serving two years, Sagitov, the honest policemen, started gathering evidence against the “Black Colonel”, who in the Uralsk police department has the reputation of overseeing the extorting and distribution of bribes.

He passed the information to Akhmedyarov, who wrote that the colonel’s son worked in the particularly lucrative license plate department (personalized places require bribes). In an article, he quoted the son’s boss as saying he was unqualified and would never have gotten the job without his father’s influence.

Then Akhmedyarov reported that the son bought a Hummer stretch limousine for weddings and didn’t put on any plates to avoid paying taxes (there was no lawsuit, but the plates appeared after the story).

Finally, he reported that the colonel failed a literacy test and was due to be fired. But he arranged to go on sick leave retroactively (the sick cannot be fired in Kazakhstan) and continues to manage the flow of bribes from the comfort of a health spa, Akhmedyarov said.

In the summer of 2010, the new governor of oil-rich but impoverished Western Kazakhstan, Baktykozha Izmukhambetov, a former oil minister, announced that Uralsk, just 300 km from the giant and highly profitable Karachaganak gas field, would finally get gas service through a new pipeline and that tenders for its construction would go out that November.

Driving along that route one day, Akhmedyarov noticed a major construction project by a large company called TengizNefteStroy, so he stopped to ask what it was. It was the pipeline, the workmen told him proudly. The 200-million-dollar company is a major local player in Tengiz, the world’s costliest oilfield development project.

Akhmedyarov contacted the governor’s office and was told no work had begun because the tenders had not gone out. So he wrote a good-news story suggesting that Uralsk might get its gas earlier than anticipated.

“We never thought this had any anything to do with corruption,” he recalled – until he was approached by the owner of a rival construction company who told him that the governor was a childhood friend of the owner of TengizNefteStroy, Tuken Jumagulov.

“He told me that if you know you’re going to get a contract, it gives you a huge advantage in the tender competition,” Akhmedyarov said.

The company sued over the ensuing article and the paper faced closure. The publisher promised to stage a protest at an upcoming OSCE conference.

“Just before it opened, Jumagulov came to see us and told us the suit would be dropped, and it was,” Akhmedyarov said.

Akhmedyarov said that on the evening of Apr. 19, he was returning home when two men stepped out from the shadows, one of them saying, “It’s him.” They shot him three times, stabbed him multiple times and fled when a neighbour arrived. Despite a cracked skull and punctured lungs, liver and kidneys, he recovered.

The attack, which came shortly weeks before a presidential visit to Uralsk, was reported by his paper and some national ones but ignored by the seven other papers in Uralsk, all owned by government entities.

Two suspects, aged 16 and 21, were arrested in a village 200 km away. An Uralskaya Nedelya team went there and reported that both were orphans, among the poorest in a poor village. They quoted relatives as saying could not have afforded to buy the gun or pay the cab fare. One had an alibi. The two were released after Nazarbayev’s visit and no one else has been arrested.

Later came lawsuits based on articles that reported that 35 junior officials were related to 35 senior ones; that two officials refused to pay for a boozy restaurant lunch, waving government IDs; how a disqualified soccer referee was spotted refereeing a major match and how three former racketeers now have senior positions in the local government.

All the suits are pending and seek half the damages from the writer and half from the publisher. If they lose, the paper will close and he will go bankrupt.

Akhmediarov, hours before leaving Washington for Almaty, brushed away any notion that he, his pregnant wife and their six-year-old daughter would be safer here. “My place is there,” he said. “And they’d be crazy to try to kill me again.”