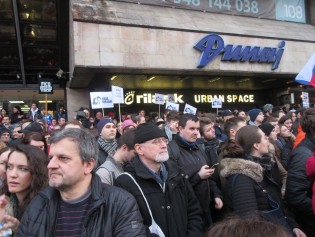 By Jonathan Rozen
On Dec. 29, 2013, just over a month before the third anniversary of the start of the Egyptian revolution that ended the 30-year rule of Hosni Mubarak, three high-profile journalists for Al Jazeera English were arrested in their hotel suite in Cairo.

By A. D. McKenzie
A woman and her husband are seated at a table. As she talks, he seems to be ignoring her, his head hidden behind a newspaper.
Next Page »
ADVERTISEMENT ADVERTISEMENT