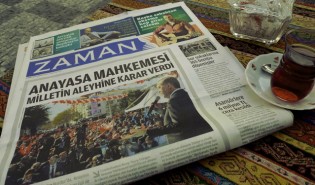 By Joris Leverink
On the evening of March 4, heavily armed police forced their way into the headquarters of the Turkish daily Zaman. The hundreds of protesters that had gathered in front of the building in an Istanbul suburb in solidarity with their newspaper were violently dispersed.

By Joris Leverink
Over the past weeks, thousands of people across Turkey have protested against the planned construction of a gold mine in Cerattepe, close to the town of Artvin in the northeast of the country. Protesters fear that the mine will cause irreparable damage to the unique natural environment of the region.

By Joris Leverink
The latest footage to come out of Sur, the historical district in Diyarbakir that has been under total lock down by Turkish armed forces for the past sixty days, shows a level of devastation one would sooner expect in Syria. In more ways than one – empty streets lined with debris, bombed-out buildings, tanks and soldiers shooting at invisible assailants – the situation in Turkey's predominantly Kurdish southeastern regions resembles a war zone.

By Joris Leverink
This Sunday, November 1, Turkey heads to the polls for the second time this year, to elect the 550 members of its Grand National Assembly. The snap elections were called for by President Recep Tayyip Erdogan in late August when the different parties failed to form a coalition government after the June elections, in which the Justice and Development Party (AKP) had lost its parliamentary majority for the first time since its 13 years in power.
ADVERTISEMENT ADVERTISEMENT