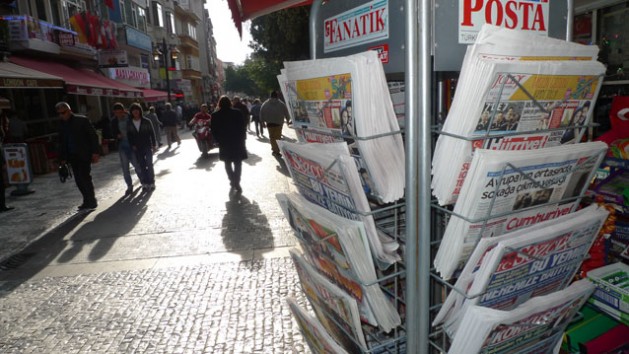 ANKARA, Turkey , Dec 1 2015 (IPS) - Days after the 1 November general elections in Turkey, Beyza Kural, a reporter with the independent press agency Bianet, rushed to Istanbul University to cover a stand-off between protesting students and the police.

At the scene, Kural was harassed and manhandled by a group of civil police for no apparent reason. She was handcuffed and only narrowly escaped detention due to the intervention of several of her colleagues. In a video of the event, a police officers can be heard addressing Kural, shouting, “From now on, nothing will be the same anymore. We are going to teach you that!”

The video quickly made its rounds through Turkish social and independent media platforms. For many, the words of the officer confirmed what they had been fearing all along: that the Justice and Development Party, or AKP, would intensify its attempts at silencing critical voices after the party’s decisive victory at the ballot box.

Over the past few years, press freedom has come under increasing pressure in Turkey. Freedom House, an independent watchdog organization, describes the status of press freedom in the country as “not free”, while the World Press Freedom Index, compiled by Reporters Without Borders ranks Turkey 149th out of 180 countries.

In a televised interview with CNN’s Christiane Amanpour on November 10, the Turkish Prime Minister Ahmet Davutoglu responded to criticisms about his government’s crackdown on the press in the run-up to the November elections. Recalling his previous job as a columnist in the 1990s, the prime minister went on to say that “Freedom of the press and intellectual freedom are redlines to me.”

The irony of this statement wasn’t lost on the Turkish public, who remembered clearly how just two weeks prior to the interview, Turkish police had forced their way into the offices of the Ipek Media Group, shutting down several opposition-linked newspapers and TV stations. “Will they inquire as to the incongruity between his remark and practices? Or will they just say, ‘This level of democracy is enough for Turkey?” Cafer Solgun, a columnist for the Turkish daily Today’s Zaman, asked rhetorically.

The police raid of the Ipek Media Group’s Istanbul headquarters occurred in the early morning of Wednesday, October 28. A tense confrontation continued for several hours, in which the police used tear gas and water cannons to disperse a crowd of hundreds of protestors and journalists that had gathered in an attempt to block the police entering the building. The police eventually forced their way inside, interrupting the TV stations’ live broadcast of the operation and placing the Media Group under the control of government-appointed administrators. Following the raid, publication of the Bugün and Millet dailies were also suspended.

Commenting on the operation, Johann Bihr, head of the Reporters Without Borders Eastern Europe and Central Asia Desk, stated that “The persecution of critical media outlets has reached an extremely worrying level before the elections. The government’s determination to silence the Ipek Media Group’s outlets is just the latest example.”

Since then, yet another example has shown how Turkey’s repression of critical media outlets continues unabated. On Thursday, November 26, Can Dündar, Editor-in-Chief for the daily Cumhuriyet, and the newspapers Ankara bureau chief Erdem Gül were arrested on charges of spying and divulging state secrets. The arrest of the two journalist is a result of their newspapers exposure of the government’s attempt at illegally smuggling arms and ammunition to rebel forces in Syria.

A detailed report prepared by Bianet meticulously documents the different cases in which press freedom and freedom of speech have come under attack in Turkey. Between July and September alone, “101 websites, 40 Twitter accounts, [and] 178 news [reports] have been censored,” a summary of the reports reads. “21 journalists, three media organs, one printing house were attacked … 28 journalists have been sued, 24 journalists and nine distributors sent to prison.”

A climate of censorship is taking over Turkey’s media landscape. Outlets critical of the government are structurally undermined by means of cooked-up charges such as tax-evasion, “making terrorist propaganda,” and “insulting the president.”

Bianet reports that in the same period 61 people have been accused, prosecuted or jailed for charges relating to “insults” directed at President Erdogan. Ten days prior to the election a 14-year old schoolboy spent a night in police custody for supposedly insulting Erdogan on Facebook. He was released the next day after he was deemed too young to be criminally charged, but the case is exemplary of the suffocating climate in which any form of critique is a potential criminal offense.

If there is any truth to the police officer’s claim that “Nothing will be the same anymore,” Turkey’s media workers, political commentators and civil activists are facing hard times ahead. For Turkey’s democracy to mature, a free press able to speak its mind to a critical public is a number one priority.

However, the country’s track record of shutting down opposition-linked media outlets and detaining minors, instills little hope that the Turkish authorities share this conviction. As Noam Chomsky deftly put in a recent article for the Washington Post: “journalism is being murdered [in Turkey].”