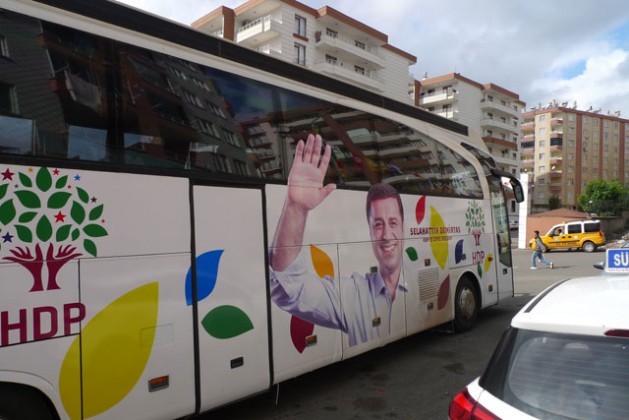 HDP election bus on the streets of Diyarbakir, prior to Turkey's general elections on Sunday, November 1. Credit: Joris Leverink/IPS

DIYARBAKIR, Turkey, Nov 4 2015 (IPS) - Despite months of violence and unrest, spirits were high in Diyarbakir, Turkey’s largest Kurdish town in the country’s southeast, prior to Sunday’s elections. In the previous weeks, multiple curfews had been declared in the city and in several towns in the region.

On election day, all of the curfews had been lifted, although a continued heavy police and military presence on the streets of many towns in Turkey’s Kurdish regions was still clear evidence of the high tensions.

According to the government the crackdown was necessary to fight terrorism, but when speaking to the local people of the region one gets an entirely different view of the situation. “After the elections in June, the situation turned very bad,” explains Arzu Karaman, a 30-year-old women’s rights activist at a local meeting in a poor Diyarbakir neighborhood. “People here believe that the conflict is [president] Erdogan’s personal war against the Kurdish people.”

It’s an often-heard theory here in the predominantly Kurdish regions of eastern Turkey. After the Justice and Development Party, or AKP, lost its parliamentary majority in the June elections for the first time in 13 years, it turned its wrath towards the Kurds. A military campaign was launched against the militant Kurdish Workers’ Party, the PKK, but in the process more than 250 civilians, including 30 children, lost their lives. From the locals’ perspective, it’s the state that is to blame for these deaths.

“After the last elections, Erdogan wasn’t able to pursue his plans for an empowered presidency,” says Selahattin Dogan, a 32-year old philosophy student. “If the HDP [a leftist party with its roots in the Kurdish freedom movement] hadn’t gained enough votes to enter the parliament, the AKP would have been very powerful. Erdogan started this conflict to show the people what happens if the AKP isn’t in power.”

The results of Sunday’s elections show that this strategy has paid off. To everyone’s surprise the AKP managed to collect close to 50 per cent of the votes, providing them with enough seats in parliament to rule the country singlehandedly.

It appears that most of the newly-gained votes for the AKP came from conservative Kurdish HDP voters and Turkish nationalist MHP voters, as both parties saw a serious drop in their support. The fourth party in parliament, the republican CHP, managed to secure about a quarter of the votes, similar to its performance in the June election.

With 317 seats in parliament, the AKP is still 13 seats short to call for a referendum in order to change the constitution and introduce an executive presidential system. But the boost in support for the liberal Islamist party shows that it’s well on course to stay in power until 2023, when Turkey will celebrate the centenary of its republic.

For many HDP voters, the increased support for the AKP comes as a slap in the face. No-one had expected – although many had hoped – that the HDP would go home with a larger share of the votes than the 13 per cent it managed to collect in June. The realization that nearly half of Turkey’s voting population apparently supports the AKP’s policies when it shuts down critical media outlets, prosecutes journalists and imprisons minors on charges of “insulting the president,” is something many people find hard to cope with.

“There is a big deception,” states Ercan Ayboga, 38, who works for the municipality in Diyarbakir, when trying to explain the post-election mood in Diyarbakir. “There was a lot of hope that we could change the government. But with 50 per cent of the votes [the AKP] can continue the war. It can continue to repress the people. They’ve done so already, and they won.”

The question on everyone’s mind is how the election results will impact the conflict in the east. Ayboga is slightly optimistic. “Now they have four years to find a solution, regardless of any elections,” he explains, suggesting that the escalated violence was used by the AKP for electoral gain and that now they can safely take a step back.

However, on Tuesday a new curfew was declared in Silvan, a small town at less than an hour’s drive from Diyarbakir. This shows that as of yet, the government shows no signs of backing down in the east.

The silver lining to Sunday’s elections is that the HDP still managed to clear the high 10 percent electoral threshold, albeit with only a small margin. The votes they lost to the AKP came mainly from the conservative camp of its support base, which had been voting AKP for many years, before switching to HDP in June. The increased violence might have convinced these voters that a vote for the AKP was a safer bet for peace, rather than to try and continue to stand up against the state’s power.

There are rough times ahead for Turkey. Gross private debt is at an all-time high, while next door, the Syrian civil war continues unabated. A future deal between Turkey and the EU regarding the refugee crisis might mean that there will be tens of thousands of extra mouths to feed, families to shelter and children to send to school. The 35-year conflict between the PKK and the Turkish state shows that neither of the parties is likely to be defeated on the battlefield, and so a political solution has to be found.

The Turkish lira soared after the AKP’s victory, and European leaders congratulated Turkey with its “democratic and peaceful” elections, but the reality on the ground shows that the country’s problems are far from over.