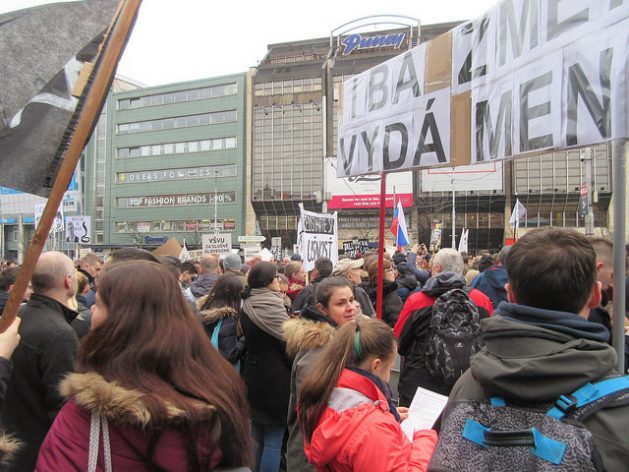 Mass protests in Slovakia in the wake of the killing of investigative journalist Jan Kuciak and his fiancee Martina Kusnirova led to the resignation of the country's Prime Minister, Interior Minister and head of police. Credit: Ed Holt/IPS

BRATISLAVA, May 22 2018 (IPS) - International media watchdogs, EU politicians, journalists and publishers have condemned Slovak police investigating the murder of a local journalist after one of his colleagues claimed she was interrogated for eight hours before being forced to hand over her telephone – potentially putting sources at risk.

Czech investigative journalist Pavla Holcova had travelled from Prague to Bratislava on May 15th believing she was going to help Slovak police with their investigation into the murder of her former colleague, Jan Kuciak, and his fiancée, Martina Kusnirova, in February this year.

"It starts with a phone, then a laptop, then interview notes and what is next?...Journalism is the canary in the coal mine. If it dies in these countries, then ‘European-ness’ will have died." --Drew Sullivan

But she said after she arrived she was questioned for eight hours by officers from the Slovak National Crime Agency (NAKA) repeatedly asking about the investigative reporting network she works with, her past work and links between Slovak business people and senior politicians.

They also demanded she hand over her mobile phone so they could access data on it.

When she refused she says she was threatened with a 1,650 Euro fine and police produced a warrant to confiscate the phone. She said she agreed to give them the phone but having failed to retrieve data from it when Holcova refused to give them passwords, they took it saying they would use Europol forensic resources to get past its passwords and access the information inside.

News of the interrogation and requisition of Holcova’s phone brought widespread condemnation from groups like Reporters Without Borders, the Organised Crime and Corruption Reporting Project (OCCRP), which Holcova, and previously Kuciak, has worked with, MEPs and other groups.

Meanwhile, in Slovakia, publishing houses and dozens of editors from local newspapers and media outlets put out a joint statement demanding Holcova’s phone be returned to her immediately, reiterating the legal right to protection of journalists’ sources and calling on Slovak police to explain their conduct.

However, they say it is not just Holcova they are defending.

Beata Balogova, Editor in Chief of the Slovak daily newspaper ‘Sme’, told IPS: “This isn’t just about Pavla, it goes further than that. We need to know whether they [the police and prosecutor] think what they have done is in line with the laws of this country.”

As in some other countries in Central Europe, media watchdogs have pointed to an alarming erosion in press freedom in Slovakia in recent years with journalists facing denigration and abuse from the government and intimidation by local businessmen.

Meanwhile, many local media outlets have been bought up by oligarchs and there are serious doubts about the political independence of the country’s public broadcaster. Criminal libel prosecutions are also a permanent threat to journalists’ work.

At the time of his death, Kuciak and Holcova had been working on a story about the links between the ‘Ndrangheta mafia and people in Smer, the senior party in the Slovak governing coalition.

In the days after the killing, there was feverish speculation about mafia or political involvement in the murder and that it had been carried out as a clear warning to other journalists.

Balogova and other Slovak journalists believe that by taking Holcova’s phone, police may have been sending a signal to journalists.

“It could have been to tell journalists that they are being watched or to try and frighten them,” she said.

There has also been speculation that the police may have been trying to get information so they can move to try and cover up links between failings in the investigation and senior figures in the Slovak police and judicial system.

In their statement, Slovak publishers and editors said: “Taking into account that many suspicions which arose after the murder of Jan Kuciak and his fiancee Martina Kusnirova point directly to representatives of criminal justice institutions, the rigorous protection of sources is more important than ever, especially when there is a risk this information could be abused.”

Drew Sullivan, Editor at the OCCRP, told IPS that the police may have been acting on orders from politicians.

“Justice is still political in Slovakia,” he said. “It is possible the ruling political party, which is more concerned about the news stories which created the protests [after Kuciak’s murder and which forced the Prime Minister’s resignation] than they are with Jan’s murder, is dictating the police‘s approach.”

And Marek Vagovic, editor in chief at Slovak news site Aktuality.sk, Kuciak‘s former employer, told the Slovak daily ‘Novy cas’: “Looking at the nature and links between those in power who control the criminal justice institutions, I don’t believe this is about investigating a double pre-meditated murder.

“I fear that in taking Pavla Holcova’s mobile phone they have a different aim: tracking down her informants so they can find out what she was working on and can warn politicians, oligarchs and members of organised crime under suspicion.”

In a statement, the Special Prosecutor’s Office, which issued the warrant to take Holcova’s phone, said that Holcova had willingly given up her phone to police and that the device had been taken solely to try and find Kuciak’s killers.

It stressed that the warrant was issued to help the investigation and not to impinge on any of Holcova’s rights as a journalist.

But Slovak lawyers and constitutional experts have questioned the police’s approach, arguing that any information relating to Kuciak’s murder found on the phone would probably not be admissible as evidence if it was accessed without Holcova giving them the password to it.

Following media attention, the Special Prosecutor’s Office said on May 18th it would send the phone back to Holcova as soon as possible and that after it was taken no attempt was made to bypass its security and access its data. But it defended the police’s conduct, saying that looking to obtain data in the phone was “a necessary and logical” step in the investigation.

It also said that Holcova would be asked to attend further questioning in the future as a witness in the investigation. Holcova, though, has said she will “consider very carefully” any future meetings with Slovak investigators.

Whatever the intentions of the Slovak police were, their actions will have had an effect, although perhaps not the one they would have been expecting if they were attempting to frighten journalists.

“It may affect how sources interact with us,” explained Balogova. “Sources speak to journalists because they believe that we can and will protect their identities. But now they may be worried that journalists cannot protect their sources. So, will they still talk to us?

“But [the police’s actions] may also have the opposite effect – journalists will just be more careful now in how they communicate with people and go about their work.”

The incident made headlines abroad and was noted in the European Parliament which has been closely following the Slovak media environment since Kuciak’s murder and the subsequent mass protests which forced the Slovak Prime Minister, Interior Minister and, eventually, the head of the police force to resign.

MEPs suggested it would have further damaged the reputation of the Slovak police, which is widely perceived as endemically corrupt and at senior level linked to powerful local business figures suspected of criminal activity.

Manfred Weber, leader of the European People’s Party in the European Parliament, said in a statement: “We thought that after the murders of Jan Kuciak and Martina Kusnirova that the Slovak government would do all it could to allow journalists to carry out their daily work and that we would see them as partners in the common fight against corruption and crime.

“Unfortunately, today we can see that, despite the Slovak government’s assurances, the opposite is happening.”

But perhaps just as importantly, the treatment of Holcova could have ramifications beyond Slovakia, potentially emboldening neighbouring governments which, critics say, are leading their own crackdowns on critical media.

Press freedom in Poland and Hungary has receded dramatically over the last few years, according to local and international media groups, with both countries’ rankings in Reporters Without Borders’ Press Freedom Index plummeting.

When asked whether he thought other governments in the region could start using similar methods following what happened to Holcova, OCCRP’s Sullivan told IPS: “Absolutely. It starts with a phone, then a laptop, then interview notes and what is next?

“There is an increasing erosion of journalism rights in the East of Europe. Hungary, Slovakia and Poland have become problematic states where independent journalism is dying.”

He added: “We’ve seen this [Slovak police treatment of Holcova] and worse in Eastern Europe, Russia and the CIS states. It is something we kind of expect from drug states, captured states and the autocracies in those regions. But we haven’t seen it with a European Union member.”

And he called on the EU to act to uphold its core values. “This is a growing splinter in the eye of Europe and the European Union needs to act decisively if it doesn’t want to lose its European values. It can’t have members denying basic values.

“If this is allowed to continue, it will lead to …. further repression of journalism. Journalism is the canary in the coal mine. If it dies in these countries, then ‘European-ness’ will have died. These are states that are fundamentally becoming undemocratic. We need media there chronicling this.”