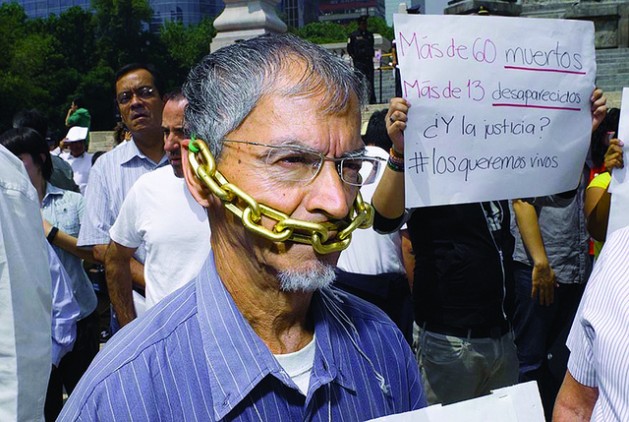 UNITED NATIONS, Feb 27 2015 (IPS) - Organised criminals in Mexico are forcing the media to stop reporting on crime, by turning their violence against journalists.

With the Mexican state offering journalists little protection, the resultant drop in freedom of information has contributed to a heightened sense of insecurity in the country.

"People are saying 'we are not going to cover certain areas', fearing revenge and not trusting that the state is going to be able to protect them.” -- Claire San Filippo

Claire San Filippo, head of Reporters Without Borders’ Americas desk, told IPS that journalists in Mexico are self-censoring due to threats and violence, but also because violence against journalists is rarely punished by the state.

“It is of tremendous concern for information freedom because people are saying ‘we are not going to cover certain areas’, fearing revenge and not trusting that the state is going to be able to protect them.”

San Filippo says that the state bears the primary duty under international law to protect journalists.

“The state obviously has a responsibility to protect the journalist, and to make sure that they can guarantee their security,” she said.

“There is a mechanism to actually protect human rights defenders and journalists and unfortunately, the mechanism hasn’t been working in a very efficient manner and hasn’t really helped the situation overall.”

The first two months of 2015 have already seen marked violence and intimidation towards journalists, including kidnappings and threats.

Reporting for Journalism in the Americas Mariana Muñoz wrote last week, “An increase in organized crime-related violence has terrorized the Mexican border state of Tamaulipas over the past week. Conflicts between rival cartel factions in the neighboring border cities of Reynosa and Matamoros have left dozens dead, escalating the present danger for journalists practicing in the region.​”

The newspaper El Mañana reported on a gunfight that killed nine people. Although they did not name any cartel individuals involved, their editor, Juárez Torres, was kidnapped and warned “We are going to kill you.”

Torres later “fled the country, half of the staff did not return to work the following day, and at least four journalists at the publication immediately announced their resignation,” Muñoz reported.

El Mañana has since avoided reporting on violent crime in Tamaulipas.

Speaking about Torres’ kidnapping and other similar incidents, San Filippo said, “When you look at the beginning of this year, it’s obviously dramatic and extremely preoccupying because we have journalists who say ‘we are not going to cover the issues of insecurity, violence and it’s consequences on people’ or we’re actually going to leave the country to go to the United States because we feel so unsecure.”

She says that Reporters Without Borders calls on the Mexican government to take the threats against journalists seriously and “not try to either diminish them or try to discredit the journalists by saying that they are actually not journalists and saying they are not related.”

She said the state should also provide timely and effective protection to journalists and their families when the journalists request it and importantly, must hold perpetrators of violence against journalists accountable.

San Filippo said this was important so that “journalists can feel secure and feel that they can carry out their job without risking their lives or lives and physical integrity of their loved ones.”

“This is the only way that you can make sure that you can ensure that there is no self-censorship and journalists don’t feel that they have to go to another country to feel safe.”

According to In Sight Crime, a foundation that studies organised crime in the Americas, “Mexico is home to the (Western) hemisphere’s largest, most sophisticated and violent organized criminal gangs.”

“They traffic in illegal drugs, contraband, arms and humans, and launder their proceeds through regional moneychangers, banks and local economic projects. They have penetrated the police and border patrols on nearly every level, in some cases starting with recruits for these units. They play political and social roles in some areas, operating as the de facto security forces.”

Steve Killelea, executive chair of the Institute for Economics and Peace, wrote last year that since “the start of the calamitous drug war in 2007” Mexico has dropped 45 places on the International Peace Index – down to 133 of 162 countries on the most recent (2013) index.

Killelea says that although Mexico does well in terms of development indicators such as life expectancy and youth empowerment, its poor overall rating in peace is partly due to the consequences of violence against journalists and poor freedom of information.