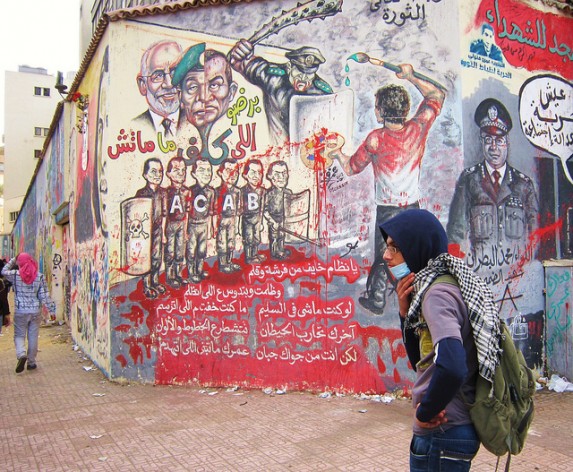 UNITED NATIONS, Feb 24 2014 (IPS) - On Dec. 29, 2013, just over a month before the third anniversary of the start of the Egyptian revolution that ended the 30-year rule of Hosni Mubarak, three high-profile journalists for Al Jazeera English were arrested in their hotel suite in Cairo.

Despite international condemnation, the Egyptian government has moved ahead with a trial, now set to resume Mar. 5. Altogether, nine Al Jazeera journalists and 11 others have been charged with conspiring with terrorists, undermining national unity and social peace and broadcasting false information, for their coverage of the Muslim Brotherhood.

“They are basically trying to go after high-profile people and use that as a way to intimidate others." -- Joe Stork

A history of control

Media censorship in Egypt is not new, but advocates say the political transitions of the past three years have brought additional challenges for free expression.

“A combination of legal and illegal ways are used by the government to punish, intimidate and threaten independent and critical voices, including journalists,” Sherif Mansour, director of the Committee to Protect Journalists’ (CPJ) Middle East and North Africa (MENA) Division, told IPS. Since 2011, when the political turmoil in Egypt began, advocates say there have not been large differences in media censorship between each of the political transitions. While the targets of silencing efforts have shifted depending on who is in power, the legal apparatus that is used to censor undesirable voices has remained the same.

“The press law or penal code form the Mubarak era has not been replaced,” Soazig Drollet, head of the MENA division at Reporters Without Borders (RSF), told IPS.

“All the regimes since the uprising in 2011 have used their power to repress media for their own sake…we saw it with the supreme council of Armed Forces in 2011, we saw it with the Muslim Brotherhood in 2012, and now we see it with [Field Marshall Abdul Fattah al-] Sisi,” she said. “There is the same will to control the media and not respect the principles of pluralism.”

Under the current military government, a combination of legal and extra-legal methods are used to pressure and censor the media. Presently, the primary focus of these efforts has been directed against any discussion of the former ruling party, the Muslim Brotherhood.

Since their fall from power in 2013, the Muslim Brotherhood has been labelled a terrorist organisation by the current leadership and their existence completely discredited.

“If you support the Muslim Brothers…you are in trouble,” Nader Gohar, chairman of the Cairo News Company (CNC), an Egyptian news station with a main office in Tahrir Square, told IPS.

While the Al Jazeera case represents just a fraction of the journalists imprisoned by the military regime, it also indicates a new logic behind its repressive tactics.

“They are basically trying to go after high-profile people and use that as a way to intimidate others who might have some critical thoughts,” Joe Stork, deputy director for MENA at Human Rights Watch, told IPS. “The Al Jazeera journalists fall into this category.”

Many governments have increasingly used “anti-terror” charges, like the ones against the Al Jazeera journalists, as a justification for censorship, something that has contributed to the degradation of global press freedom, said Joel Simon, executive director of CPJ.

In January 2014, a new provisional constitution was passed in Egypt.

“Parts of the constitution look a little bit better [for media freedom] than the one by the Muslim Brotherhood,” Drollet told IPS. But “if you really look at the text carefully, they say many things that are really concerning…mainly when it comes to this possibility of censorship when there is wartime and a state of emergency.”

But the constitution is not the only factor in assessing the legal apparatus surrounding Egyptian media freedom.

In 2013, for the first time, CPJ ranked Egypt among the top 10 jailers of journalists in the world, while RSF ranked Egypt in the lowest section of its press freedom index, at 158th out of 179 countries.

For Gohar and the Cairo News Company, the current military regime has not been as bad as the conditions under the Muslim Brotherhood. That is, as long as they avoid covering the Muslim Brothers in a positive light.

“When we started to have the Muslim Brothers’ [government], they were a threat, they have a kind of militia who bothered us,” he said. “They were like a censorship beside the regular government censorship.”

Nevertheless, the current regime has also affected the way the CNC operates. Since the fall of President Mohamed Morsi, the military government and the Ministry of Communication have not permitted the renewal of the CNC’s press certification.

“It’s kind of like a precaution, like, lets wait and see,” said Gohar. “The officials don’t want to give permission, in case we do something wrong.”

Media licences have been heavily restricted for almost three years, since the revolution in 2011, essentially forcing many media outlets to break the law to continue operations.

The authorities want to see what is going to be published, explained Gohar. “If someone is not behaving, they can stop them easily.”

Self-censorship is “always the first consequence when you have a crackdown on news media and journalists,” Delphine Halgand, U.S. director for RSF, told IPS. “Arrests, imprisonment, charges and an increase in prosecution are having a major deterrent effect on journalists.”

The increasingly polarised and politicised population has also had an impact on media freedom in Egypt. Currently, a vast majority strongly supports the military government and al-Sisi, who is expected to win the presidency by a landslide.

For Egyptian journalists, this means that repercussions for criticism of the government will just as likely come from the people as from the government.

“You will be treated like a traitor,” said Gohar. “This is new, that there is harassment from the public toward the media.”

While the United Nations has expressed its concern over the “increasingly severe clampdown and physical attacks” on media in Egypt, human rights organisation say that publicising the lack of media freedom is likely the best way to apply pressure on the Egyptian government to relax censorship and release imprisoned journalists.

“They really have gone too far,” said Drollet, referring to the military government’s policy. “They have lost any credibility. They are not even hiding that they just want to have one kind of media exist in Egypt.”

The hashtag FreeAJStaff (#FreeAJStaff), often accompanied with a picture of the tweet’s author with a piece of tape over their mouth, is just one of these efforts to increase awareness about the situation, specifically pertaining to the Al Jazeera journalists, in Egypt.

“I would say the situation today is worse that it was,” declared Stork, “this is pretty serious.”

“The media should just tell the facts, to say what is going on the ground with factual events, with objectivity and independence,” said Drollet. “How can a democracy emerge and exist in such a situation?”