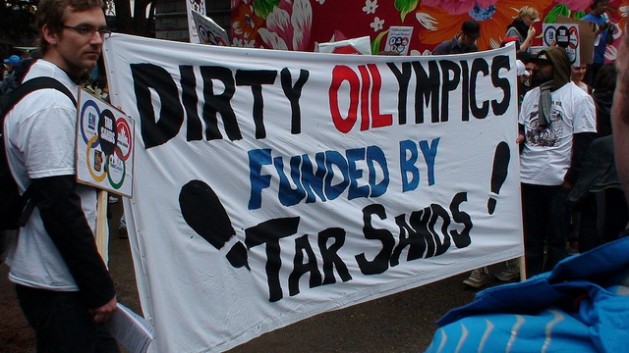 UXBRIDGE, Canada, Feb 20 2013 (IPS) - Canada’s police and security agencies think citizens concerned about the environment are threats to national security, and some are under surveillance, documents reveal.

Protests and opposition to Canada’s resource-based economy, especially oil and gas production, are now viewed as threats to national security, Monaghan said. This conclusion is based on official security documents obtained under freedom of information laws over the last five years.

It is governments and the fossil fuel industry who are the extremists, threatening the prosperity of future generations.

For the past two years, officials in Canada’s Stephen Harper government have been calling environmentalists “radicals” and accusing environmental organisations of money laundering.

By branding activists as extremists or radicals, many people will not want to be involved. Surveillance and other security activities will have a similar “chilling effect”, he fears.

“There could be an incredibly profound impact on public participation,” Monaghan noted.

In a Canadian Senate hearing last week, Richard Fadden, the director of CSIS (Canadian Security Intelligence Service) said they are more worried about domestic terrorism, acknowledging that the vast majority of its spying is done within Canada. Fadden said they are “following a number of cases where we think people might be inclined to acts of terrorism”.

Canada is at very low risk from foreign terrorists, but like the U.S. it built a large security apparatus following 9/11. The resources and costs are wildly out of proportion to the risk, Monaghan said.

Without a significant foreign threat, security services are looking inside the country for reasons to justify their “bloated budgets”, he said. And the new “enemy within” is environmental organisations, according to the inflammatory rhetoric of Harper’s Conservative government.

A year ago, in a widely-published open letter, Joe Oliver, the minister of natural resources, slammed “environmental and other radical groups” for getting in the way of forestry, mining and energy projects.

“These groups threaten to hijack our regulatory system to achieve their radical ideological agenda,” Oliver wrote, without naming any groups.

“They use funding from foreign special interest groups to undermine Canada’s national economic interest,” he charged, without offering any evidence.

A few months later, in a television interview, environment minister Peter Kent accused some charitable environmental groups in Canada of being used “to launder offshore foreign funds for inappropriate use against Canadian interest”. Kent went on imply evidence of illegal activity but offered no proof.

The tar is too thick to extract with conventional drilling so it is strip-mined or boiled out of the ground, destroying large areas of pristine forest, consuming vast quantities of fresh water and emitting tens of millions of tonnes of climate-disrupting carbon.

Environmentalists’ have labelled the tar sands region “Canada’s Mordor”. The Harper and Alberta governments are banking on doubling or tripling the size of the tar sands and aggressively support new pipelines to ship the tarry oil south to the U.S., west to Asia and east to Europe.

Tar sands oil, natural gas and the pipelines to move them are considered by these governments to be essential to “Canada’s national economic interest”. This has now been directly linked to national security, said Monaghan.

The federal and Alberta governments and the fossil fuel industry are “virtually seamless” in their thinking, said Greenpeace Canada’s executive director Bruce Cox.

“You can’t tell the difference between a government of Canada ad and one from the oil industry,” Cox told IPS.

Canada’s Natural Resource ministry spent nine million dollars in 2012 in advertising to promote pipelines, safety measures such as double-hulled oil tankers and changes to environmental laws. Cox said those changes “gutted” environmental regulations but the government promotes them as a benefit to the Canadian people.

Canadian security forces seem to have a “fixation” with Greenpeace, continually describing them as “potentially violent” in threat assessment documents, said Monaghan.

Cox said he was aware of this attention and met with the head of the RCMP last year. “We’re an outspoken voice for non-violence and this was made clear to the RCMP,” Cox said.

He said there was real anger among Canadians about the degradation of the natural environment by oil, gas and other extractive industries and governments working for those industries and not in the public interest. Security forces should see Greenpeace as a “plus”, a non-violent outlet for this anger, he argued.

“It is governments and the fossil fuel industry who are the extremists, threatening the prosperity of future generations,” Cox said.