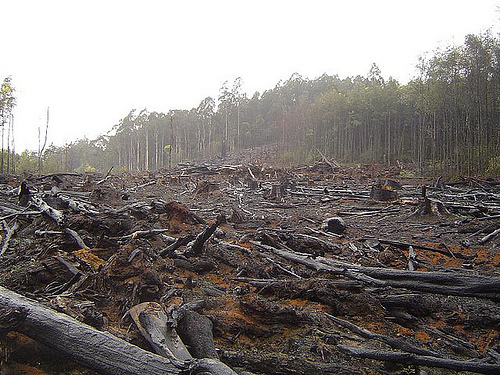 Unless leaders act promptly, climate change and environmental degradation will only worsen and cause greater global problems, scientists warn. Credit: Crustmania/ CC by 2.0

UNITED NATIONS, Mar 27 2012 (IPS) - When a landmark U.N conference on sustainable development kicks off in Brazil mid-June, more than 120 world leaders are expected to participate in the much-ballyhooed talkfest on the future of the global environment.

“But yet we haven’t had a single leader who has stood up and provided a vision and direction that these talks desperately need,” complained Tim Gore of the London-based Oxfam International.

“What we need,” he told reporters Tuesday, “is a vision for the future to reorient the global economy around the needs of the poorest – and to meet those needs within the environmental limits of this planet.

“It is not too late,” he said, “to get onto that track but we need that vision to be forthcoming now.”

Besides the lack of political leadership, the upcoming conference is also showing signs of divisiveness over a draft outcome document – an action plan to be adopted by world leaders on sustainable development for the future.

An international coalition of over 400 non-governmental organisations (NGOs) from 67 countries is challenging “an apparent systematic effort by particular governments to delete virtually all references to well-established rights to water, energy, food and development.”

These are some of the basic principles agreed at the original Earth Summit in 1992, says the coalition which includes Oxfam International, Greenpeace International, the International Trade Union Confederation (ITUC), the Council for Canadians, CIVICUS, and Women in Europe for a Common Future.

Asked if there is a North-South confrontation – rich versus poor – over negotiations on the draft document, Anil Naidoo of the Council of Canadians told IPS, “My assessment is that the conflicts (amongst U.N. member states) in the negotiations are mostly focused on the ill-defined green economy and on attacks on human rights and equity.

“We are seeing northern governments like Canada, the United States, New Zealand and the UK trying to remove human rights and safeguards in the document, which would leave the most vulnerable completely at the mercy of a commodified green economy,” he said.

In a letter to Secretary-General Ban Ki-moon, and also addressed to the 193 U.N. member states, the coalition says that many countries are opposing prescriptive language that commits governments to actually do what they claim to support in principle and act as duty bearers of human rights.

These include the provision of finance, technology and other means of implementation to support sustainable development efforts in developing countries.

On the other hand, there is a strong push for private sector investments and initiatives to fill in the gap left by the public sector, says the letter, which is also addressed to the secretary- general of the conference, Under-Secretary-General Sha Zukang of China.

“This risks privatizing and commoditizing common goods such as water which in turn endangers access and affordability, which are fundamental to such rights,” it says.

Although economic tools are essential to implement the decisions aiming for sustainability, social justice and peace, the letter warns, a private economy rationale should not prevail over the fulfillment of human needs and the respect of planetary boundaries.

The coalition also calls for strong institutional framework and regulation because “weakly regulated markets have already proven to be a threat not only to people and nature, but also to economies and nation states themselves.”

Markets must work for people, people should not work for markets, the letter declares.

Naidoo told IPS, “As we have seen in the fight to achieve the human right to water and sanitation, the strongest resistance to human rights is clearly from countries like Canada, the U.S., New Zealand and some within the European Union such as the UK.”

This, he pointed out, sets up a situation where corporations from these countries can go into places where the most vulnerable are then without any protection.

“This is completely unacceptable,” he said.

The conflict around the “green economy” is clearly related to the desire by Northern governments and some Southern ones to promote a market and financialized system for nature itself, he argued.

“If they are successful, and also remove human rights, we risk doing immense harm to the most vulnerable and to the environment, through Rio+20. This would be a travesty,” he said.

Speaking during World Water Day last Thursday, Catarina de Albuquerque, a U.N. water and sanitation expert, complained that some states, including Canada and the UK, “are apparently proposing the removal of an explicit reference to the right to water and sanitation from the first draft of the outcome document”.

She said all countries should recognise the right to water and sanitation for all, and most importantly, “countries cannot go back on their decision to support this right.”

The 193-member U.N. General Assembly adopted a resolution recognizing this right back in July 2010.

Maude Barlow, national chairperson of the Council of Canadians, told IPS, “Yes, Canada is one of the countries leading the charge to have the human right to water and sanitation language removed from the Rio+20 draft text.”

“To the shame of Canadians, Canada continues to refuse to recognise these rights even though the U.N. General Assembly and the Human Rights Council have clearly recognised them and, as a member state of the UN, Canada is now bound by this development,” she said.

Barlowe said Canada also played a very negative role at the World Water Forum in Marseille two weeks ago when it was instrumental in weakening the language on the human rights to water and sanitation in the ministerial statement that came out of that summit.

Canada recently attempted to remove important human rights language from a key Food and Agriculture Organisation document (Voluntary Guidelines on the Responsible Governance of Tenure of Land, Fisheries and Forest in the Context of National Food Security) designed to provide for a wide range of human rights around land, food and housing.

“And don’t forget of course, Canada’s abandonment of the Kyoto Protocol (on climate change) and any notion that rich countries had a duty to poor countries to recognise the need for climate justice,” said Barlowe, a former senior advisor on water to the president of the U.N. General Assembly.

She pointed out that under the present Stephen Harper government, Canada has now taken its place as “a leading regressive force” in the search for food, environmental, climate and water justice in the world.

“At home and internationally, Canada is now putting profit and personal gain before human and environmental rights, moving the world backward in time,” Barlowe added.