Solar Streetlights Light the Way Toward Green Energy in Caribbean 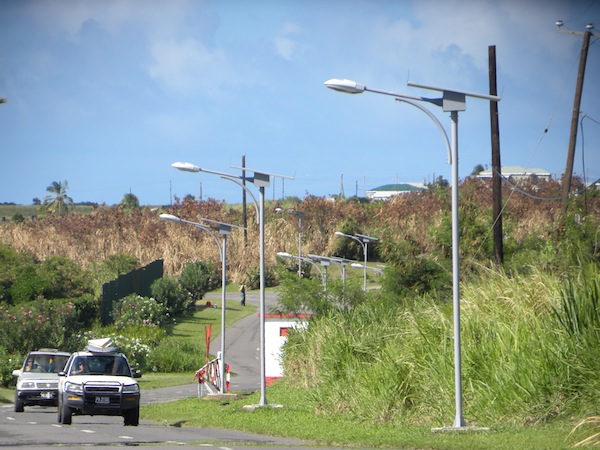 St. Kitts residents welcome solar streetlights in areas they say have been too dark and prone to crime. Credit: Desmond Brown/IPS

BASSETERRE, St. Kitts, Feb 2 2013 (IPS) - The tiny federation of St. Kitts-Nevis and its larger neighbour to the north, Jamaica, are leading the Caribbean’s search for new ways to become more energy efficient by installing new solar streetlights, a green alternative to traditional ones.

“During the past year, we have successfully placed solar panels on the roof of government headquarters and set smart LED lights on the Kim Collins Highway and Frigate Bay Road,” the resident Taiwanese ambassador, Miguel Tsao, told IPS. “Both ventures are significant and important. Also these projects were initiated with our joint efforts to tap into the unlimited clean energy source.”

Instead of relying on fossil fuel, Tsao wants to see citizens doing their part to harness renewable energy to help make the vision of a green island a reality. The diplomat added that there are other important initiatives planned for the island, including the establishment of the first-ever solar farm and the second phase of an Agro-Tourism Demonstration Farm early in 2013.

The solar streetlights were installed by the Taiwanese company Speed Tech Energy. “It’s a unique Cobra design. The lamp pole is solid steel and type and it can resist wind speeds of up to 250 kilometres per hour,” Lucas Chiu, the company’s general manager, told IPS.

Solar panels convert the sunlight into electricity during the day, and the generated electricity is stored in a battery.

Chiu explained that in cloudy or rainy days the batteries will still charge at 15 to 30 percent. Streetlights will function for three nights (for 13 hours each night), even during periods of continuous rainy days.

Orville Liddie, a 29-year-old local resident, told IPS that there were no lights in those areas for several years and that the solar streetlights could not have come at a better time. “To me it’s a benefit to the communities where the lights have been installed because before the lights there were extremely dark spots,” he said.

“I am a driver and I have always been concerned that when you are driving through those areas at night people could jump out into the road and put road blocks or there could be very serious accidents. I was particularly concerned for the bus drivers because criminals could hold them up at those dark spots at knife point or even at gunpoint,” Liddie added.

Nevis, the smaller island in the twin-island federation, is also showing its neighbours in the Organisation of Eastern Caribbean States (OECS) that it is a leader in the area of generating clean and efficient energy and reducing energy costs, in spite of its small geographic and population size.

In 2010, the 13-kilometre-long island with a mere 12,000 residents, launched the first wind farm ever to be commissioned in the OECS with a promise to provide jobs for islanders, a reliable supply of wind energy, cheaper electricity and reduction in surcharge and the use of imported oils.

The island has been lauded by officials of the Bill Clinton Climate Change Initiative for its efforts towards a “Green Nevis”. During a recent visit, a delegation from the Clinton Climate Change Initiative led by Councilor Jan Hartke and Ambassador Paoli Zampolli held discussions with island officials on work that has already been done to move from fossil to alternative energy on Nevis.

“We have been delighted to see how the government has taken the lead and has mobilised the endeavor to bring geothermal to Nevis, and we will help the government with consultation in an effort to make alternative energy a reality on the island,” said Hartke.

He noted that the Bill Clinton Climate Change Initiative aims to bring down the enormous electricity rates in small island states through alternative resources, with the assistance of wind, solar or waste energy.

A government statement said the aim is to significantly reduce the cost to the budget to maintain the country’s approximately 93,000 streetlights, which totals upwards of 2 billion Jamaican dollars per year (more than 2 million U.S. dollars).

On Jan. 8, the first set of solar-powered light emitting diode (LED) fixtures were installed at Osbourne Store, a community in the central parish of Clarendon.

“We hope to be able to proceed to install lights all over Clarendon and then into other parts of Jamaica. We hope that we will be able to complete the programme…by midyear, and then we can evaluate the results and determine where we go from there,” the country’s local government and community development minister, Noel Arscott said.

Arscott said the pilot phase will see some 5,000 LED panels being installed in Clarendon as well as sections of St. Catherine and Kingston and St. Andrew. Additionally, he said the ministry’s offices at Hagley Park Road in the capital Kingston would also be retrofitted with energy saving solutions.