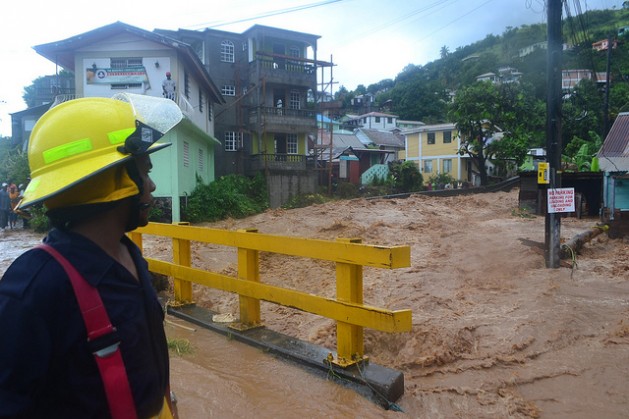 UNITED NATIONS, Oct 4 2012 (IPS) - Their speeches did not grab international headlines like that delivered by U.S. President Barack Obama, nor did other delegates walk out as they spoke, as was the case for Iran’s Mahmoud Ahmadinejad.

But Caribbean Community (CARICOM) leaders are nonetheless hoping that their united front on the environment at the just concluded United Nations General Assembly (UNGA) will spur the international community to take them and other Small Island Developing States (SIDS) much more seriously.

“The islands of our planet are at war against climate change, warming temperatures and rising seas,” St. Vincent and the Grenadines Prime Minister Dr. Ralph Gonsalves told delegates. “This war is not a future event, it is a present-day and ongoing battle… the survival of our islands is at stake.”

Caribbean countries are hoping that by the time the international community gathers in the Pacific in 2014 for the Third International Conference for the Sustainable Development of SIDS, there will be progress on a number of recommendations that, for instance, emerged from the Rio+20 conference held in Brazil earlier this year.

“The failure to date to reach a legally binding outcome on climate change is cause of grave concern,” said Dominica’s U.N. Ambassador Vince Henderson. “While the debate continues, the challenges to our islands are becoming greater.”

Figures released by the Belize-based Caribbean Community Climate Change Centre (CCCCC) show that over the last decade, damage from intense climatic conditions has cost the region in excess of half a trillion dollars.

“In real terms, the threats posed to the Caribbean region’s development prospects are severe and it is now accepted that adaptation will require a sizeable and sustained investment of resources,” Jamaica’s Environment and Climate Change Minister Roberts Pickersgill told a community-based climate change workshop in Kingston on Tuesday.

Barbados-based environmental resource management specialist Sandra Prescod Dalrymple agrees that while the international community should feel an obligation to support the Caribbean, it also a fact that the developed countries “are growing less willing to do so”.

“The region needs to draw on its own resourcefulness and pursue innovative financing in climate change efforts. It is clear that we are being impacted by climate change and that our economic earning sectors are suffering as a result this would only worsen,” she told IPS.

Antigua and Barbuda recently joined other small island states at the Summit of the Alliance of Small Island States (AOSIS), to send the message that they cannot wait “for our lands to disappear before we act”.

“We must act now to respond to the climate crisis, and ensure that not a single country is sacrificed, no matter how small,” said the island’s Prime Minister Baldwin Spencer.

“There is coral bleaching beyond the depths of our shores, and hurricanes are becoming more recurrent and severe,” he said, adding “it is my government’s hope that the selfish act of inaction will dissipate in Doha (Round of Negotiations) and that a positive outcome in climate change negotiations will usher in new hopes for humanity and compassion for our planet.”

St. Kitts and Nevis Prime Minister Dr. Denzil Douglas said he was troubled that the main contributors of greenhouse gases were still not taking responsibility for the coastal degradation, coral reef bleaching and decimation, infrastructure damage and loss of lives that their actions have wrought.

“The physical, mental and financial burden that other countries’ energy usage has inflicted on countries like mine has been enormous – plunging us deeper into debt, and severely frustrating our efforts to meet our Millennium Development Goals,” he told the UNGA.

“While a shift to renewable energy will not instantly solve the myriad problems caused by a significantly fossil-fuel based global economy, the embrace of green energy will, indeed, help to halt the intense downward spiral into which our fossil-fuel based economies have thrust our planet,” Douglas said.

Guyana, which has entered into a multi-million-dollar agreement with Norway to implement an “avoided deforestation” plan, said that despite “strong scientific and economic case for action, the global response to the climate crisis falls far short of what is required both in terms of scale and in urgency”.

President Donald Ramotar said that the projected level of reduction of greenhouse gas emissions is much too low and that scientists have warned of catastrophic consequences if the rise in greenhouse emissions is not halted.

“Already some states are facing imminent extinction. To add insult to injury, the promise of fast-start financing made at Copenhagen (Denmark), a few years ago, has not materialised,” he noted. “The result is that those most at risk are effectively deprived of the means to adapt to this existential threat.”

But Prescod Dalrymple believes the Caribbean should continue to focus on building resilience and find novel ways of accessing the resources to do so.

“The onus should not only be on governments but the private sector needs to step up and be fully engaged. We need to engage technology, train and re-train our workforce and make use of our large population of youth that are looking for career opportunities and decent work,” she told IPS.

“I support public private partnerships and would wish that the region would move towards mandating standards and operating procedures to build climate resilience in new and existing ventures,” she added.

Caribbean countries have also stressed the importance of extending and amending the Kyoto Protocol before it lapses at the end of this year.

The Kyoto Protocol is an international agreement linked to the United Nations Framework Convention on Climate Change. The major feature of the accord is that it sets binding targets for 37 industrialised countries and the European community for reducing greenhouse gas (GHG) emissions .These amount to an average of five percent against 1990 levels over the five-year period 2008-2012.

Barbadian Foreign Affairs and Foreign Trade Minister Maxine McClean said her island welcomes the decision taken in Durban to launch negotiations on a new legally-binding agreement that would take effect after 2020.

But, she said, a post-2020 agreement is meaningless “if ambitious actions are not taken now to reduce global emissions and provide finance and technology to vulnerable developing countries.

“This is essential if we are to adapt to the ever worsening impacts of climate change. The upcoming Climate Change Conference in Doha must, therefore, prioritise the pre-2020 actions necessary to ensure that the world is on track in 2020 to meet the below two degree or 1.5 degree globally agreed goals.”