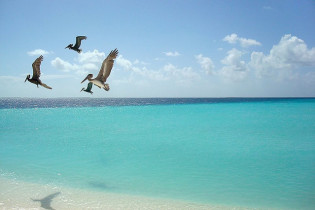 By Peter Richards
Their speeches did not grab international headlines like that delivered by U.S. President Barack Obama, nor did other delegates walk out as they spoke, as was the case for Iran’s Mahmoud Ahmadinejad.

By Stephen Leahy
Most corals thrive only in shallow waters, where there is enough light for them to grow. But the rapid rise in sea level, due to the melting of polar ice, is making these conditions increasingly scarce.

By Desmond Brown
As a boy, Hilson Baptiste remembers going to his neighbour's home and giving them a large slice of pumpkin grown in his family's backyard garden. In return, he would be given two fish for his family.
ADVERTISEMENT ADVERTISEMENT