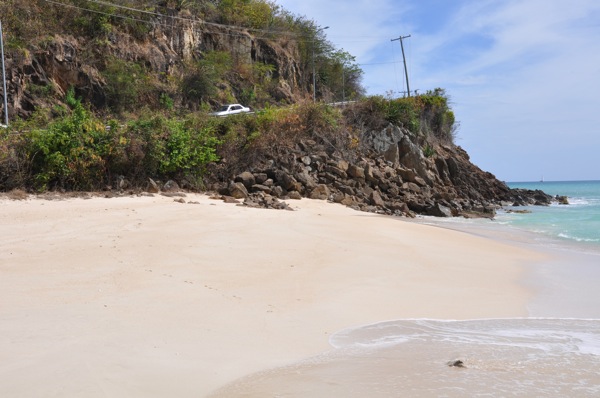 But over the past 10 years, St. Kitts and Nevis, as well as the rest of the Caribbean, have seen radical climatic shifts. There is no question in Douglas’s mind that these changes are the direct results of climate change.

“Growing up, I knew nothing of hurricanes, (but) in the last decade St. Kitts and Nevis has felt the wrath of hurricanes like never before,” said Douglas, who has been the head of government here for the last 17 years.

Yet the islands of St. Kitts and Nevis are “hardly unique” in experiencing these hurricanes, Douglas said. “We can remember only too well the brutality of  (hurricanes) Ivan and Emily” in Grenada in 2004 and 2005, despite the fact that at the time, Grenada was considered “very safely nestled in the more southerly reaches of our archipelago”, he told IPS.

In July 2005 Hurricane Emily left a trail of destruction in Grenada, which was still recovering from the ravages of Hurricane Ivan the previous year.

Those who live in the region face multifaceted and troubling ramifications as a result of climate change, Douglas, who has primary responsibility for the environment and climate change in the quasi-cabinet of the Organisation of Eastern Caribbean States (OECS), told audience members from across the region during a climate change seminar earlier in September.

The OECS is a nine-member group comprised of Antigua and Barbuda, Dominica, Grenada, Montserrat, St. Kitts and Nevis, St. Lucia, and St. Vincent and the Grenadines. Anguilla and the British Virgin Islands are associate members.

Douglas stressed that policymakers need to jump into action, as climate change has a dimension to it that is both urgent and existential.

“More than ever we are confronted with the threat of frequent and severe droughts, hurricanes, dwindling fish stock and all of the other threats that so clearly reflect the nature of our own island existence,” Douglas said.

Michael Taylor from the United States Agency for International Development (USAID) agreed with Douglas on the need for urgent action, saying the conference at which Douglas spoke was quite timely. But he added that while government involvement is key in terms of sustainability, community participation is even more critical for continuity.

“The training of civil society organisations and non-governmental organisations is critical in building general awareness to secure effective resilience of communities and their adaptation to climate change,” Taylor said.

“Unless the local population fully understands the issues and are prepared to make a commitment to participate actively, success can be jeopardised,” he said.

These include Nevis, through the development of a master plan for the water sector; rainwater harvesting in St. Vincent; and the distribution of desalinated water procured through reverse osmosis to householders in Bequia.

OECS Commissioner of St. Kitts Astonia Browne told IPS that like most small-island developing states, the environments of OECS member states and the challenges they face are characterised by their small geographic area, small open economies, limited infrastructure and high vulnerability to natural disasters. These countries must find their own way in confronting these challenges, as external funding is hard to come by.

The United Nations Framework Convention on Climate Change identifies the Caribbean region as one of the most vulnerable regions to be threatened by climate change impacts over the next 30 to 50 years. The region will have to grapple with increased temperatures, more tropical storms, flooded wetlands and coastal lowlands, sea level rise, and more.

“We cannot wait for the developed world to determine whether or not we survive climate change. Each of us must do what is within our power to act towards reducing our vulnerabilities and building our resilience,” Browne said.

She expressed concern that natural resources are degraded by practises such as poorly planned development, population growth, pollution, exploitation of resources, and more. Unless they are brought under control, countries will not be able to withstand the impacts of climate change.

They will lose the ability to “provide services and functions vital to the sustainable development of our small island economies”, Browne warned.

Participants in the two-day seminar, held under the theme “Climate Change and Our Coast – Exploring Possibilities, Finding Solutions”, examined the impact of climate change on the critical sector of tourism and the policies and processes used to address these challenges.

Douglas called the implications of climate change “obvious and catastrophic for tourism”. He said that adaptation integrated across a wide range of sectors, rather than in a piecemeal fashion, is the only way the region will be able to deal with the effects of climate change.

“Tourism will be particularly hard hit by climate change. As ocean temperatures rise, many coral reefs will experience bleaching”, which leads to “decreased interests in diving and snorkelling and a significant loss in associated revenues”, he said. “With more frequent and violent storms, beaches, coastal development and coastal infrastructure will be severely threatened.”

“It has been suggested that climate change is the greatest threat that small island nations face,” Douglas said. He agreed with the idea, he continued. “Climate change compounds all the other threats and hazards that we face.”