ST. GEORGE’S, Grenada, Mar 19 2012 (IPS) - James Nicholas has always made a living off the sea. A fisherman in the tri-island state of Grenada, Carriacou and Petite Martinique, he recalls the profitable business of selling his daily catch to residents and restaurants on the island and even exporting fish to luxury hotels in neighbouring ones. 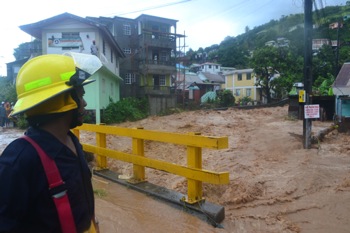 But things have changed in recent times. Local experts are blaming conditions associated with climate change, insisting that they have led to a significant depletion of the local fishing stock.

At its peak in 2010, the fishing industry here employed an estimated 4,000 people and pumped 5.2 million dollars into the economy from exports alone.

“Growing up, we had an abundance of fish around the coastal areas,” Nicholas, who now serves as chairman of the Southern Fishermen Association, one of the groups representing fisher folk here, told IPS. Now, “some of the species have disappeared entirely.”

“Recently I was counting maybe about eight species that are totally gone. I can’t say it is climate change because I am not a scientist; I just have to go along with what the scientists are saying.”

One thing is certain, though. Nicholas said his members have been catching less and less fish, a decrease that is taking a financial toll on them.

Karl Hood, a former environment minister who is now minister of foreign affairs, told IPS he believes the dwindling numbers of fish in the country’s waters are a direct result of climate change, adding that fishing is only one of several industries affected by this global phenomenon.

He pointed to a drastic reduction in ‘jacks’, a small fish widely used by the fishermen as bait.

“Since last year, fisher folk have not been catching the jacks,” Hood said in an interview at his office at the Ministerial Complex at the Botanical Gardens on the outskirts of the capital.

“Usually around November there (are) lots of jacks but we’ve had none, so much so that the fishermen can’t get bait to go fishing. There is a drought in fishing; if you go to the fish market there is no fish.”

Due to the scarcity of jacks, Nicholas said fishermen have been forced to import sardines from the United States to use as bait, noting that the alternative would be to pack away their fishing gear and stay home.

Reefs, home to some 25 percent of all marine species, including fish, are suffering a whole array of assaults, said Clare Morrall, director of the marine biology programme at St. George’s University.

She pointed out that sea surface temperatures over the last few years have been much higher than normal. The result is coral bleaching, a stress condition in reef corals that involves a breakdown of the symbiotic relationship between corals and unicellular algae.

“It’s not just that you have climate change effects, that the corals may have some ability to recover from. We’ve also got increased nutrient loads from run-offs and that’s also potentially climate change- related in terms of extended periods of drought,” she told IPS.

Erosion increases when it rains after a prolonged drought, Morrall explained. Coupled with fertilizer and sewerage, it spells disaster for the coral reefs by increasing nutrients that support macro algae on the reef.

“When you’ve taken away the fish that would normally crop and harvest and keep that algae in check, you’ve got a situation which has happened throughout the Caribbean, when you get a change from coral dominated systems to algal dominated systems,” she said.

“How climate change is playing into that is just another thing that the corals have to deal with.”

A storm surge two years ago devastated the island’s signature tourist attraction, the two-mile-long Grand Anse Beach in the south of the country, Hood recalled as he pointing out other industries feeling the impacts of climate change.

The water at Grand Anse Beach has also become deeper – another indication of erosion, he said.

A United Nations Environment Programme (UNEP) report stated that a 50 centimetre rise in sea level could lead to serious inundation in more than 60 percent of beaches in some areas of Grenada.

“The report says 50, but even a few feet rise would seriously impact us. So it (climate change) is a real threat to us,” Hood emphasised.

The government official said farmers have also been hurt, as changing weather patterns brought about a serious drought two years ago, the worst that the island had seen in recent history.

“We’ve seen coconut trees dry up, citrus trees dry up. That would never happen before and now we’re seeing so much rain that the traditional crops that you would plant and get at a certain time – you are not getting them,” he told IPS.

Hood has also been watching developments in Dominica, a neighbouring island where heavy rains in September 2011 led to massive landslides, damaged homes and washed away vehicles and bridges. Some communities were left without pipe-borne water and electricity.

A problem of money and politics

Climate change, Hood lamented, is a money problem and an issue of getting the funds required for adaptation.

With Caribbean economies only slowly turning the corner after a long and deep recession, Hood said they simply do not have the funds necessary to address the problems brought about by climate change.

But he said Grenada and its neighbours recognise that there is strength in numbers. They have formed an Alliance of Small Island States, AOSIS, (43 states in the Caribbean and Pacific) to bring the problems of small island states to the fore and seek financial assistance.

“We would speak with one voice… so that the bigger countries, the bigger emitters, those who pollute the most would hear what we’re talking about and understand where we’re coming from. We are very committed to fight and to continue to fight until we begin to see some changes,” Hood said.

“All of us together must see this as something that is very, very serious because there are still some people who take this very lightly. We face a very daunting task.”