In Antigua, Fishing Brings Both Income and Ecological Destruction 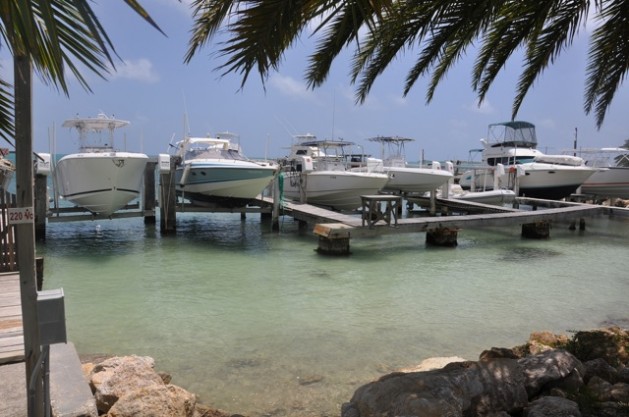 In Antigua, these boats now sail through a channel, behind where they are docked, where coral once thrived. Credit: Desmond Brown/IPS

ST. JOHN'S, Antigua, May 23 2012 (IPS) - Eli Fuller is a third-generation Antiguan who, for the past two decades, has been exploring the Antigua and Barbuda coastline. But he laments the fact that he can no longer see the coral that he recalls were somewhat of an underwater jungle when he was a young boy, akin to what you’d see in the Amazon rain forest. 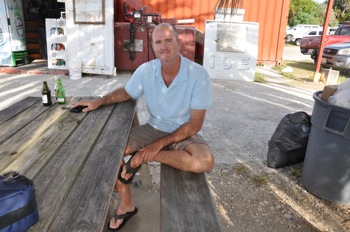 “Nobody ever thought – I didn’t think – the corals would be dead in my lifetime,” Fuller, a marine environmentalist, told IPS.

“When I was a child, no sailboat would ever sail through certain areas, but nowadays yachts are sailing through all of these channels because the reef is…dead, gone. They’re broken up.”

Scientists say warmer seas and a record hurricane season in 2005 devastated more than half of the coral reefs in the Caribbean. The World Conservation Union (WCU) warned in a report that this severe damage to reefs would probably become a regular event, given predictions of rising global temperatures due to climate change.

A protected area is a specific region of land or water legally protected from specific human activities because of its ecological, archaeological or other type of value. A marine protected area may be declared, for instance, to safeguard its fish stocks, reefs, wreckages, breeding sanctuaries and the like.

In Belize, marine protected areas where fishing was forbidden rejuvenated much more quickly than did unprotected reefs in Jamaica after suffering similar hurricane damage, Fuller said.

When a coral gets damaged, algae naturally grow on it, he explained. Then, parrotfish and other herbivorous fish like blue tang eat the algae.

In Belize’s marine protected areas, “there are millions of parrotfish. The hurricanes came, destroyed the coals, algae grew up and the fish just ate it all and slowly the coral starts growing back.”

Protected areas, in name only

Fuller said while technically there are marine protected areas dictated by the Antigua and Barbuda Fisheries Act, in reality, there is no real protection.

As a result, “you have large scale overfishing of key species…important to keep(ing) the reefs healthy,” he said. A ban on hunting parrotfish and blue tang would help corals recover much more quickly from hurricanes, but as Fuller pointed out, parrotfish are easy to shoot with a spear gun, “and a lot of local people love parrotfish”.

“If there is one fish in Antigua I’d say you have to protect, it’s the parrotfish, but the Fisheries Department exports it,” Fuller added.

Apart from Belize, other examples of successful, zoned marine protected areas exist in the Caribbean. 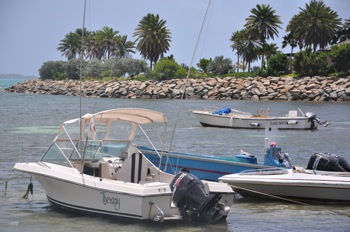 In Antigua, the absence of barrier reefs forces developers to use boulders to protect against groundswells coming ashore. Credit: Desmond Brown/IPS

The 6,600 hectares Tobago Cays Marine Park in St. Vincent and the Grenadines is divided into nine different zones. Included are specifications for mooring different sized vessels and for turtle and seabird reserves. The protected area offers great economic benefits to the population and is a valued part of its social, cultural and environmental landscape.

Studies have also shown that such no-fish areas help “replenish” fish stocks in other areas, with increased catch sizes and larger individual fish. No-fish zones also protect other sea life that might otherwise inadvertently be caught in nets.

Vince Best, environmental scientist and lecturer at the Antigua State College, told IPS that coral bleaching provides direct evidence of the effects of climate change on reef ecosystems. Scientists speculate that coral bleaching will become an annual event by approximately 2020.

“Another detrimental effect of global climate change,” Best noted, will be the increase in carbon dioxide in oceans that will increase the acidity of ocean water, therefore “reducing the solubility of other compounds…needed by corals in reef-building.”

To this end, he said, administrations in Antigua and Barbuda, as well as other nations with this unique source of life, need to do more to protect their coral reefs.

“Many of the administrations in affected nations have concentrated on economic growth, primarily with little regard to the damage caused to the very resources which allow for said economic growth,” Best said.

For example, “in the Caribbean, we are highly reliant on tourism as the mainstay of our particular economies, yet coral reefs are one of the many resources which attract tourists to our shores.”

And while actual estimates of the direct economic value of coral reefs to Antigua and Barbuda are difficult to obtain, established research has estimated that the communities located in coastal areas, as well as national economies in the general Caribbean region, are likely to sustain substantial economic losses should the current trends in coral reef degradation and destruction continue.

It has been estimated that fisheries associated with coral reef in the Caribbean region are responsible for generating net annual revenues, which have been valued at or above approximately 837 million East Caribbean dollars, or about 310 million U.S. dollars.

Meanwhile, one of the Caribbean’s main sources of income is simultaneously causing some of the worst damage to reefs.

“Fishing has historically been recognized as a given to the growth of the Caribbean economy,” Best said. It not only serves as a source of food for the region, but as part of the export market, it also contributes millions of dollars to regional economies.

In the Caribbean, Best said, fisheries are an unregulated “free access resource”. Yet “the location and distribution of the fish are highly predictable,” he added.

While all hope is not lost, Best pointed out that tremendous damage has already been done to reef systems in the Caribbean, and in some cases, he said, damage is so severe that many of the reefs are beyond repair.

But he said there are a number of inexpensive and practical measures, which can be taken to ameliorate the physical status of reefs in the Caribbean. One initiative, the Reefs at Risk project, suggests several possible actions.

They include “the establishment of better management practices to encourage sustainable fisheries, to protect reefs from direct damage, and to integrate the sometimes conflicting approaches to management in the watersheds and adjacent waters around coral reefs”.

“Fundamental to supporting these actions is wider involvement of the public and stakeholders in the management process, as well as an improved level of understanding of the importance of coral reefs,” he added.