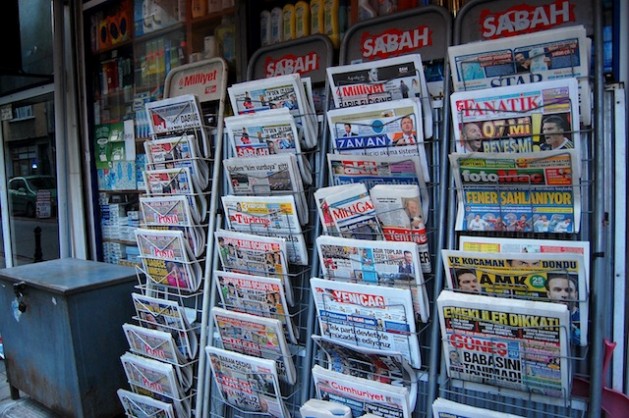 Newspapers on sale in Istanbul. But the freedom of Turkish journalists is seriously threatened. Credit: Jillian Kestler-D’Amours/IPS.

ISTANBUL, Feb 1 2013 (IPS) - As negotiations in Turkey’s efforts to join the European Union remain stalled, many worry that the Turkish government has little incentive to curb its ongoing crackdown on media freedoms and freedom of expression.

“Reviving Turkey’s accession process to the EU is crucially relevant to press freedom in the country for the simple reason that the process provides the government with a fundamental incentive to make progress,” wrote former European ambassador to Turkey Marc Pierini in a policy paper for the Carnegie Endowment for International Peace.

“The EU needs a prosperous, stable and democratic Turkey irrespective of whether it is a member, a strategic ally, or a neighbour. More importantly, it needs a Turkey that is at peace with itself and manages coexistence and tolerance between various strands of its society,” Pierini wrote.

In recent years, local and international human rights groups have condemned the Turkish government under Prime Minister Recep Tayyip Erdogan, and his Justice and Development Party (AKP), for placing severe restrictions on media freedoms, and, in particular, for jailing large numbers of journalists.

According to a report from the Committee to Protect Journalists (CPJ) titled Turkey’s Press Freedom Crisis, Turkey imprisoned the largest number of journalists in the world in 2012, ahead of Iran, Eritrea and China.

In August alone, 76 Turkish reporters were in imprisoned; 70 percent of these were Kurdish citizens of the state. Many journalists were charged for their coverage of the banned Kurdistan Workers Party, or PKK, which Turkey deems a terrorist group.

“Authorities have imprisoned journalists on a mass scale on terrorism or anti-state charges, launched thousands of other criminal prosecutions on charges such as denigrating Turkishness or influencing court proceedings, and used pressure tactics to sow self-censorship,” CPJ stated.

In response, Turkish Justice Minister Sadullah Ergin called the allegations included in the CPJ report “exaggerated” and stated that criticism of press freedom in Turkey was being used as a political tool against the government.

“We, as the Government, would not want any single person, whether a journalist or not, to be victimised because of their thoughts or expressions,” Ergin wrote. “Turkey is making an effort to strike the right balance between preventing the praising of violence and terrorist propaganda, and the need to expand freedom of speech.”

Still, many have pointed to Turkey’s flawed penal code as a major factor in suppressing freedom of the press. The country’s vague anti-terror legislation – writing an article can lead journalists to be accused of belonging to, or aiding, a terrorist group, for example – has been especially condemned.

According to Hugh Pope, a researcher on Turkey at the International Crisis Group (ICG), the upcoming fourth judicial reform package which the Turkish government is expected to unveil shortly must address this problematic definition of terrorism.

“The definition of terrorism is completely out of sync with the European norm and it has to change,” Pope told IPS. “It’s absolutely essential to adjust the definition of terrorism to something that is more rational and thereby allow the release of several thousand people currently in jail on terrorist charges that wouldn’t be considered to be terrorists anywhere else in Europe.”

Turkey was declared eligible to join the European Union in 1997, and accession negotiations began in 2005. The process has been stalled since 2006, however, largely due to Turkey’s conflict with Cyprus over Turkish control of half the island territory.

“It doesn’t help that in Europe, Turkey is perceived as a gagger of the press, but I think that’s not the main problem. The main problem is the major European reservations about Turkey,” Pope added. “But if Turkey had a more defensible media scene, that would make Turkey seem more European.”

“It is very important (for Turkish journalists) to feel that they are not isolated, (that) they are not alone. The visits to the court hearings have shown enormous support,” EFJ director Renate Schroeder told IPS.

“All journalists know what it is to want to write the truth even though we all know how difficult it is. Just to be critical, that’s why you are a journalist. There is a real bond and solidarity,” Schroeder said.

In its last progress report on Turkey’s EU accession aspirations released in October, the European Commission said while space exists for debating sensitive issues, and opposition views are expressed in Turkey, the state’s reforms on freedom of expression fall short.

It stated that the arrests and imprisonment of journalists, the application of the state’s anti-terror legislation, and high-ranking government and army officials who have launched cases against journalists are the most pressing problems.

“All of this, combined with a high concentration of the media in industrial conglomerates with interests going far beyond the free circulation of information and ideas, has a chilling effect and limits freedom of expression in practice, while making self-censorship a common phenomenon in the Turkish media,” the Commission found. (END)