In Middle East, Women’s Labour Half of Global Levels 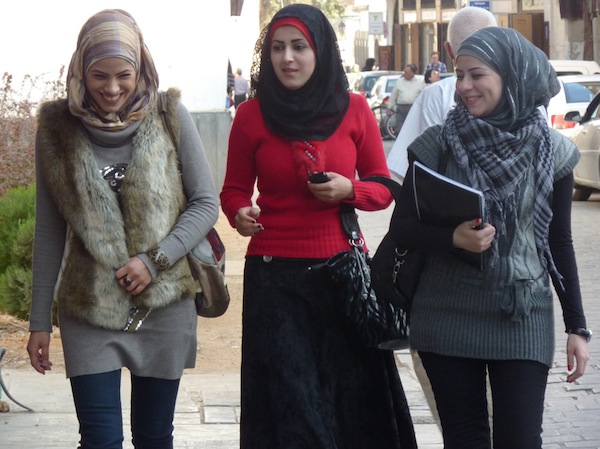 Women in the Middle East and North Africa have made significant strides in health and education but not in workforce participation. Credit: Rebecca Murray/IPS

WASHINGTON, Mar 20 2013 (IPS) - As countries in the Middle East and North Africa adjust to profound political changes and economic difficulties, development experts on the region have increasingly turned their attention to the social and economic potential of incorporating more female workers into the labour market.

Not only would more employed women stimulate economic growth, but a more inclusive labour market has also been thought to encourage political participation among women. But the World Bank is warning that Middle Eastern and North African (MENA) countries are lagging on bringing more women into the workforce.

At the core of these findings is a puzzle in development indicators that is largely unique to the region: as women in the Middle East and North Africa have made unprecedented strides in health and education, female workforce participation has struggled to make commensurate gains.

“MENA countries have wisely invested in women’s education but they are not yet fully tapping into their potential to contribute to growth and prosperity,” Manuela Ferro, director for poverty reduction and economic management in MENA at the Washington-based World Bank, said in a statement.

A bank report released last week points to a wide and interrelated set of economic, legal and social factors that help to explain these findings. In most MENA countries, female-to-male enrolment ratios are close to or above one-to-one, and eight countries even have a “reverse gender gap” in post-secondary education, in which women enrol in greater numbers than men.

Likewise, maternal mortality fell by 59 percent between 1990 and 2008, the largest decline in the world.

Such impressive gains have not been matched in the labour markets in the region, however. Female participation hovers at just 25 percent, compared with 50 percent worldwide.

Middle Eastern countries are not fully tapping into women's potential to contribute to economic growth and prosperity.

Although the report repeatedly mentions norms and customs that stress rigid ideas of women’s roles in society, the authors caution against attributing too much of the findings to Islam. They cite the diversity of women’s status across Muslim countries as evidence of a greater system of factors at work.

Current scholarship typically considers “variations in economic structures and policies among countries, or differences in pre-existing cultural values within a given country” more important, the report said.

This idea stands in contrast to another World Bank report from 2004, which looked at gender and development in the MENA region. At the time, researchers cited ideas of the woman as central to family honour in Islamic societies and the Muslim code of modesty, or mahram, as some of the strongest barriers to female participation in public life.

Yet it is impossible to escape the centrality of the law – and the uneven enforcement of anti-discrimination laws – as one of the most important and immediate avenues for bringing more women into the workforce.

“In principle, it can work both ways,” Tara Vishwanath, the lead author of the new report, told IPS. “But many would argue that without equality in the letter of the law, its interpretation and its implementation, it would be hard to ensure a level playing field for women.”

The structure of oil-dominated economies could also be to blame for squeezing job markets typically dominated by women.

Low-wage, export-oriented industries such as textiles are one typical way through which women have entered the workforce in developing countries. But during oil booms, academics have found that economies tend to shift away from female-heavy “traded” sectors and instead towards male-dominated non-traded sectors, such as construction and retail.

“The benefits of educating girls are many, and I believe families in the MENA region are aware of that,” Mayra Buvinic, a senior fellow with the U.N. Foundation, a Washington think tank, and former director of gender and development at the World Bank, told IPS.

She pointed to the relatively high income of MENA countries to explain the gender education-workforce mismatch.

“Because of their high income levels, they are able to afford educating all of their children, male and female,” she says. “They do not have to make hard choices.”

In this sense, the education-workforce mismatch is a sign of relative luxury, of an economy in which women have not yet had to enter the workforce in large numbers out of sheer necessity. The World Bank suggests that this could be one reason many other lower-income developing countries are outpacing the MENA region in this regard.

Aside from the job markets of oil-dominated economies, policies of generous food, fuel and electricity subsidies also lower women’s incentives to work.

In Kuwait, for instance, subsidies account for as much as 20 percent of government spending. Such practices generally lower household costs and make the prospect of working outside the home less attractive for women, especially because doing so is often accompanied by, for example, additional costs for childcare.

Vishwanath and her co-authors propose reforms to such policies based on the fear that they dampen incentives to work. They also suggest tweaking other policies that may encourage more female labour force participation, lauding the effects of two tax credits (for earned income and child care) that have encouraged U.S. women to participate in the workplace.

“Although there is little consensus on the use of quotas, recent evidence finds that even temporary or short-term quotas can play an important role in changing attitudes and stereotypes,” Vishwanath says.

To this end, many are closely watching the effects of a December 2012 decision by the UAE government to implement gender quotas in corporate boardrooms.