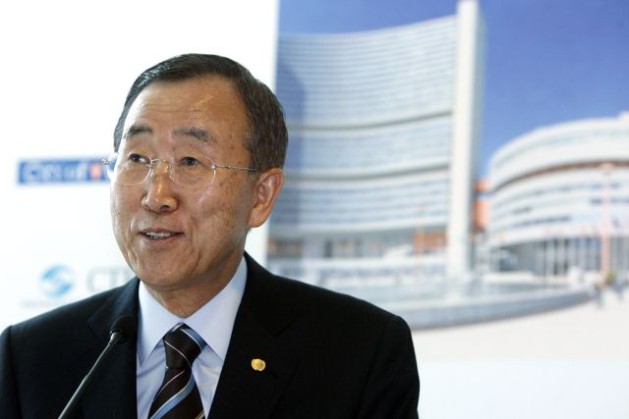 Ban Ki-moon's UNCTAD pick will be routinely endorsed by the 193-member General Assembly, which has never rejected a nomination from a secretary-general. Credit: UN Photo/Mark Garten

UNITED NATIONS, Mar 28 2013 (IPS) - – The Geneva-based U.N. Conference on Trade and Development (UNCTAD), described as a key forum for developing nations on issues relating to trade, investment and development, will have a new secretary-general come September.

As befits a longstanding tradition of geographical rotation, the next head should come from Africa.

At least four Africans, including a former trade minister from Zambia, are feverishly lobbying for the prestigious job.

But Secretary-General Ban Ki-moon, who is vested with the power to nominate the new UNCTAD chief, heads an opaque selection process where he refuses to even name a short-list of candidates, as with all other senior appointments in the world body.

Ban’s pick will be routinely endorsed by the 193-member General Assembly, which has never rejected a nomination from a secretary-general.

Sir Richard Jolly, a former deputy executive director of the U.N. children’s agency UNICEF, told IPS, “There is a need for some process of open hearing and interview of the best qualified potential candidates, prior to and as a step towards the decision by the secretary-general.”

He said possible ways this could be done were set out in a 1996 Dag Hammarskjold publication by two senior U.N. officials, Brian Urquhart and Erskine Childers, titled ” A World in Need of Leadership: Tomorrow’s United Nations- a Fresh Appraisal”.

“I would add that given the importance of choosing someone with the professional range and awareness of how asymmetries of political and economic power operate in trade and development, the interviewing group should include some distinguished economists with knowledge, experience and reputation in this area,” he added.

He singled out Joseph Stiglitz, professor at Columbia University and the 2001 Nobel Prize winner for Economics, and Jose Antonio Ocampo, former finance minister of Colombia and ex-U.N. under-secretary-general for economic and social affairs, as good examples of potential members of an interview panel.

As Urquhart and Childers explained, such a process of open hearings and interview, need not pre-empt the final decision by the secretary-general but it would help narrow the field to a small number of suitable and outstanding candidates and add transparency and objectivity to the whole process, said Sir Richard, currently honorary professor and research associate at the Institute of Development Studies at the University of Sussex in the UK.

Jan Pronk, a former three-term Dutch minister of development cooperation and a former UNCTAD assistant secretary-general, told IPS, “In my view, (and under) the present phase of globalisation and (economic) crisis, the new secretary-general of UNCTAD should be a person who will carry weight in discussions with leaders of other international organisations, which – contrary to the UNCTAD secretary-general – have decision-making powers.

“He/she should in particular be able to voice the concerns of weaker developing countries, rather than emerging economies,” said Pronk, currently professor of theory and practice of international development at the International Institute of Social Studies in The Hague, Netherlands.

The latter, much more than one or two decades ago, have already gained influence both in the Bretton Woods institutions – namely, the World Bank and the International Monetary Fund – and in the World Trade Organisation (WTO), he said.

Asked for his comments, U.N. spokesman Farhan Haq, told IPS, “We don’t comment on appointment processes, so I won’t do that this time, either.

“I haven’t heard about any change in this process from our normal one,” he added.

Both Sir Richard and Pronk are part of a group of nearly 150 academics, former senior U.N. officials, ranking diplomats and political decision-makers who are calling for “an intellectually outstanding personality as the new leader of UNCTAD” when the current head, Supachai Panitchpakdi of Thailand, completes his term of office in August.

In an open letter to Ban, the group says the selection is crucial, especially at this time of global economic uncertainty.

“We very strongly urge that the next Secretary-General of UNCTAD, in addition to all the necessary experience, knowledge and management abilities, should have in particular the capacity and courage for independent thought,” the letter says.

“It is this characteristic that has been the distinguishing factor among the eminent persons who have held the post over nearly 50 years of UNCTAD’s existence.

“We have an interest in the outcome of this matter,” the letter further states, “but no interest in a particular candidate.”

“We all fervently believe in the value to the international community, particularly developing countries, of ensuring a strong and credible UNCTAD that serves to focus inter-governmental debates on how the workings of the global economy affect developing countries.”

Yilmaz Akyuz, chief economist at the Geneva-based South Centre and former Director and Chief Economist at UNCTAD, regretted there is no transparency in U.N. appointments compared with the International Labour Organisation (ILO) or the WTO, where candidates are known publicly, interviewed and shortlisted.

He said no secretary-general has taken an UNCTAD candidate to the General Assembly without securing the support of 132-member Group of 77 developing countries (G77).

“And never more than one candidate. It is all agreed before it is taken to the General Assembly,” he told IPS.

“And if he cannot get agreement, the process is delayed. We were without a secretary-general in UNCTAD for more than a year after Ken Dadzie left in 1994,” he added.

A G77 source told IPS that Ban has so far not consulted the Group about a candidate or candidates for the UNCTAD job.

John Burley, a former UNCTAD director and coordinator of the open letter, told IPS there has been no official response to the collective letter.

“The letter has been posted on a number of websites and the reaction is positive,” he added.

He found it “incongruous” that the declared candidates for the post of WTO director general are invited to make presentations to an informal meeting of the WTO General Council, and thereafter hold a WTO-sponsored press conference, “whereas the U.N. hides the process.”