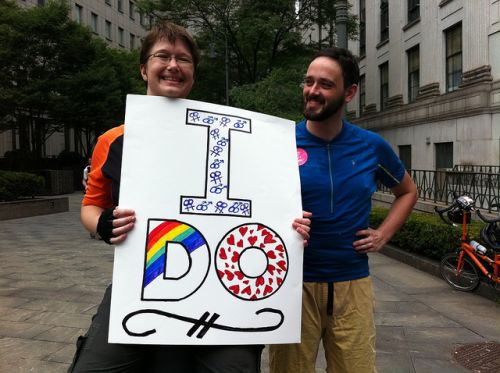 Those against same-sex marriage in the U.S. and those supporting it traded places as the majority opinion over the past decade. Credit: Jason Tester Guerilla Futures/cc by 2.0

WASHINGTON, Mar 27 2013 (IPS) - On the second day of oral arguments in two different cases involving the constitutionality of same-sex marriage, a majority of the U.S. Supreme Court on Wednesday expressed serious doubts about the 1996 Defense of Marriage Act (DOMA), which codifies the non-recognition of same-sex marriage for federal and inter-state purposes.

“Marriage equality is a fundamental right, but it also has important implications for other rights – access to housing, custody of children, for example,” Cristina Finch, managing director of the Women’s Human Rights Programme at Amnesty International, told IPS.

Although a separate case heard Tuesday deals with the issue from the angle of a statewide ban – California’s Proposition 8 – both cases have been heralded as potentially landmark decisions.

“I remember supporting [presidential candidate] John Kerry when I was 12, and hearing about the idea of a constitutional amendment to ban marriage – and knowing that was wrong even at that time,” Melissa Wasser, an activist who came to Washington from Ohio to hear the arguments, told IPS outside of the Supreme Court.

“I’m 20 and I feel like we’re finally going through the [legal] steps.”

New figures from a Pew Research Center poll on public opinion toward gay marriage attest to a strikingly rapid shift in public opinion on the issue. Researchers found that those against same-sex marriage and those supporting it traded places as the majority opinion over the past decade.

In 2003, 58 percent of U.S. citizens were against gay marriage. This year, 49 percent supported it, while 44 percent opposed it.

The numbers are even starker if opinion is broken down by age group. According to the same study, 70 percent of those age 18 to 32 support same-sex marriage, compared to just 31 percent of those older than 68 years old.

While the case being heard regarding DOMA, which was passed in 1996, is expected to have a more decisive impact, the California case could be dismissed, as several justices have expressed hesitation to take it on in the first place.

“I just wonder if this case was properly granted,” Justice Anthony Kennedy, who had been expected to be the deciding vote, wondered aloud during Tuesday’s hearings.

Kennedy was likely referring to the charge that the lawyers supporting and challenging California’s law, a state-wide ban on same-sex marriage, are not directly enough injured by it, as they are not from California or affected personally by the ban themselves.

If the justices indeed decide that the case should not have been accepted by the court, a dismissal would uphold the lower court ruling, and California would go back to granting marriage licenses to same-sex couples.

The DOMA case, on the other hand, is more squarely in the realm of federal law. “It seems to me there’s injury here,” Justice Kennedy said Wednesday.

DOMA found its way to the Supreme Court when a woman named Edith Windsor was forced to pay 363,000 dollars in real-estate taxes after the death of her spouse because, under federal law, their marriage was ineligible for tax-relief benefits given to heterosexual couples.

“DOMA does not bar or invalidate any state-law marriage but leaves states free to decide whether they will recognize same-sex marriages,” said a brief filed by the Republican congressional group that is defending the law.

Although the court’s decisions are not slated to become public until June, the activists and supporters gathered outside the court exuded optimism.

“I am pretty confident DOMA will be struck down,” Tom Kelly, a high school student who came from Massachusetts out of an interest in constitutional law, told IPS.

One element of the DOMA problem that poses potential problems in the Supreme Court’s jurisdiction, however, is the unusual refusal of the government to defend its own law.

In 2011, the Obama administration made a statement that it had found Section 3 of DOMA, which enshrines the non-recognition of same-sex marriage for tax, insurance, and social security benefits, unconstitutional. Despite an appeal from the justice department to overturn the lower court’s ruling, the administration refused to defend it in court, and a Republican Congressional group took up defending it instead.

“This is wholly unprecedented,” Chief Justice John G. Roberts said about the odd circumstances, which some say effectively amounted to a lack of challenge between the two sides.

If the administration’s agreement with the lower court indeed suggests a lack of controversy to a degree that could grant jurisdiction to the Supreme Court, the justices could dismiss the case altogether.

This possibility – that there may not, legally and politically, be enough controversy on the issue for a Supreme Court case – could indeed be most telling about the general direction of gay marriage.

“Not only do the majority of people in the United States support marriage equality, but laws on the state level are changing quickly,” Finch from Amnesty told IPS. “The time is now for this human right to be recognised.”