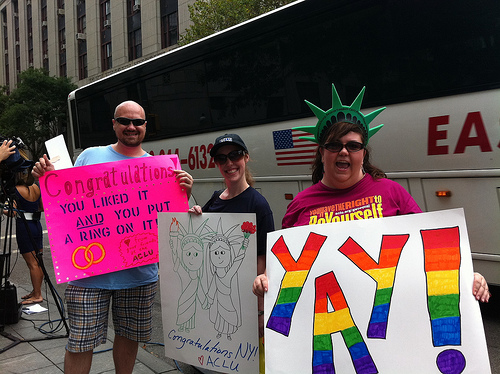 WASHINGTON, May 9 2012 (IPS) - U.S. President Barack Obama Wednesday declared his support for same-sex marriage, becoming the first sitting president to do so and thrusting the issue into the centre of his campaign for re-election.

Analysts here described Obama’s new position as politically risky, a point that was underlined by Tuesday’s approval by 60 percent of voters in North Carolina of an amendment to the state constitution affirming that only marriage between a man and a woman is legally recognisable.

North Carolina, a critical swing state in Obama’s victory in the 2008 presidential elections, joined 29 other states, including other key battleground states in November, such as Virginia, Florida, Ohio, Pennsylvania, and Colorado, with constitutional amendments banning same-sex marriages.

At the same time, however, the move could help mobilise Obama’s Democratic base, and the polling during the period of his presidency has shown growing support for gay marriage. A Gallup poll released Tuesday found that 50 percent of respondents favoured legalising same-sex marriage and 48 percent opposed.

“Many political handicappers won’t be able to resist criticising Obama for picking a fight in the culture-war terrain that evangelical-strumming, Karl Rove-types have been trying to tease out for years,” wrote Steve Clemons on his widely read Atlantic blog.

“But President Obama is not prone to emotional leaps of faith and knee jerk shifts in policy. Their polls must show that the nation is ready to have this fight – that most independents and Democrats think same-sex marriage should be a civil right,” he added.

“My position is the same on gay marriage as it’s been …from the beginning, and that is that marriage is a relation between a man and a woman,” he told a radio interviewer in Denver. “That’s the posture that I had as governor and I have that today.”

But gay and human rights groups praised Obama for speaking out.

“Today, President Obama made history by boldly stating that gay and lesbian Americans should be fully and equally part of the fabric of American society and that our families deserve nothing less than the equal respect and recognition that comes through marriage,” said Joe Solomonese, the president of the Human Rights Campaign, the most prominent U.S. lobby group for gay, lesbian, bisexual and trans- gender (GLBT) issues.

“Following in the footsteps of predecessors who brought the nation forward on racial equality, this is a signature example of a president leading the people in a direction that is right and inevitable, even though some may not feel ready for it,” said Suzanne Nossel, the executive director of the U.S. chapter of Amnesty International (AIUSA).

Obama, who has long supported equal rights for gays and lesbians and who abolished the Bill Clinton-era “Don’t Ask, Don’t Tell” (DADT) policy that required homosexual U.S. servicemen and women to hide their sexual preferences in order to remain in uniform, announced his position during an interview with ABC’s ‘Good Morning America’ to be aired Thursday. He said that his views about same-sex marriage and LGBT rights in general have evolved over time.

“I’ve always been adamant that gay and lesbian Americans should be treated fairly and equally,” Obama said in the video that was released Wednesday.

“I have to tell you that over the course of several years as I have talked to friends and family and neighbours, when I think about members of my own staff who are in incredibly committed monogamous relationships, same-sex relationships, who are raising kids together, when I think about those soldiers or airmen or marines or sailors who are out there fighting on my behalf and yet feel constrained, even now that Don’t Ask Don’t Tell is gone, because they are not able to commit themselves in a marriage, at a certain point I’ve just concluded that for me personally it is important for me to go ahead and affirm that I think same sex couples should be able to get married,” he said.

Obama was put on the spot on the issue on Sunday, when his vice president, Joe Biden, told the widely watched “Meet the Press” public affairs television programme that he was “absolutely comfortable” with same-sex marriage, a position that was immediately endorsed by Obama’s education secretary, Arne Duncan.

Same-sex marriages are recognised in six states – including New York and, ironically, Romney’s Massachusetts, which became the first state to grant marriage licenses to LGBT couples in 2004 – and the District of Columbia. The legislatures of both Washington state and Maryland have also approved laws granting same-sex marriage licenses, but they may be challenged by proposed referendums in November.

California legalised same-sex marriages in 2008, but voters in a referendum in November that year overturned the law.

In 1996, conservatives in Congress passed the Defense of Marriage Act which, for the first time, defined marriage under federal law as a union between a man and a woman.

The upshot of that law has been the denial by the federal government of a variety of benefits, such as Social Security, health insurance, and even hospital visitation rights, to LGBT couples who, if legally married, would be eligible to receive them. Same-sex “civil unions”, a status short of legal marriage, are recognised by a contract.

In 2010, a federal court in Massachusetts held that the denial of such rights and benefits to same-sex married couples in that state was unconstitutional, a ruling that is currently under appeal and may yet reach the Supreme Court.

In 2008, Obama expressed support for “civil unions” that have been passed by a number of states to provide individuals in longstanding same-sex relationships with the same state benefits and rights that are accorded legally married couples. But federal rights and benefits were still denied them.

In explaining his evolution, Obama stressed the religious roots of his thinking, noting that he had talked with his wife, Michelle, about this “over the years. …(I)n the end, the values that I care most deeply about and she cares most deeply about is how we treat other people, and, you know, we are both practicing Christians, and obviously this position may be considered to put us at odds with the views of others, but …when we think about faith, …what we think about is, not only Christ sacrificing himself on our behalf, but it’s also the Golden Rule – you know, treat others the way you would want to be treated.”