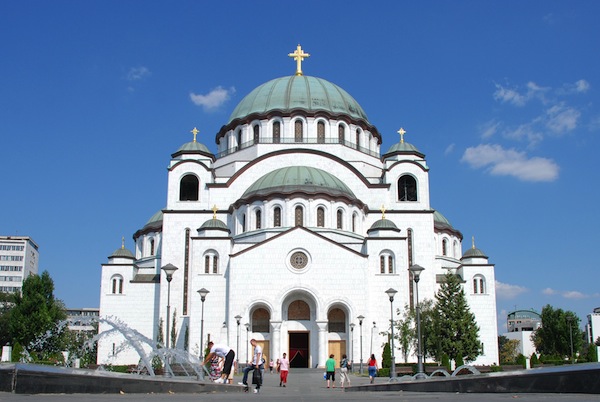 The Serbian Orthodox Church is highly influential in Serbia. Above, the Cathedral of Saint Sava in Belgrade. Credit: George Groutas/CC by 2.0

BELGRADE, May 16 2013 (IPS) - The influential Serbian Orthodox Church publicly crossed a line recently when two of its top clergymen took part in a Belgrade rally with messages amounting to direct threats against the lives of government officials.

The rally last Friday was organised by opponents of Serbia’s recent and historic agreement with Kosovo that essentially ceded authority over Kosovo’s Serb population to Pristina.

“We pray for the dead souls of government and parliament, and may all their sins be forgiven,” Archbishop Amfilohije told some 3,000 ultra nationalists who gathered at the central Republic Square.

Amfilohije’s words were followed by a warning from Bishop Atanasije to current Prime Minister Ivica Dacic. “The prime minister speaks about real politics only,” the bishop said. “That is how Prime Minister Zoran Djindjic [assassinated in 2003] used to speak, and we all know how he ended.”

The agreement with Pristina was signed last month under the auspices of the European Union (EU) and called for the normalisation of relations between Serbia and its former province.

It also caused deep disturbance among some 100,000 Serbs who live in Kosovo and refuse to recognise the authority of Pristina, despite their largely having autonomy.

Populated by 1.7 million ethnic Albanians, Kosovo was part of Serbia in the former Yugoslavia, which fell apart in 1991, and was under direct rule of Belgrade, with a Serb minority holding power until 1999.

In the 1990s, armed rebellion against Belgrade led to bloody repression by the security forces of former Serbian leader Slobodan Milosevic that left more than 13,000 ethnic Albanians dead. The bloodshed was stopped by 11 weeks of NATO bombing in Serbia in 1999 and by the introduction of United Nations rule over the former Serbian province.

After building its first democratic institutions, Kosovo declared independence in 2008 and has so far been recognised as a state by 96 nations.

But Kosovo is also the cradle of the Serb medieval state, embedded in the hearts and minds of millions of Serbs as the home of their rulers and Orthodox Christianity. Some of the oldest and most important monasteries and churches are in Kosovo, despite the fact that ethnic Albanians have become a majority there.

“Nothing can justify the scandalous behaviour of two bishops at the rally,” religion analyst and author Mirko Djordjevic told IPS. “Speeches by two SPC [Serbian Orthodox Church] primates are unprecedented and will certainly bear influence on future relations between the government and the church.”

“It’s high time the SPC stopped meddling into affairs of state,” commented leading Belgrade daily Blic. “The reputation of this institution has now been burnt to the ground, and its hate speech should be sanctioned.”

Public outcry and anger were most visible on media sites, where hundreds of visitors, even those who identified themselves as believers, posted protests against the clergy’s vitriolic speeches.

The role of the church

The SPC became influential in Serbia when the former Yugoslavia collapsed and Milosevic loosened his communist anti-religion grip for the sake of gaining allies in his wars of the 1990s. The church joined him, following the official policy of Serbia that said it was only “defending Serbs living outside [the] mother country”, meaning in Croatia and Bosnia. Milosevic’s wars led to the deaths of more than 200,000 non-Serbs and deeply tarnished Serbia’s reputation.

Religious curriculum was introduced in Serbian schools in 2001, as the regime that replaced Milosevic’s wanted good relations with the SPC.

“The church used the void left by [the] collapse of previous values and lack of new ones in the war chaos of the nineties,” Zivica Tucic, an independent analyst and expert on religious matters, told IPS. During political and economic transitions and crises, “people have nowhere to turn to but the church,” he explained.

According to the 2011 census, 94 percent of 7.3 million Serbs were Orthodox, but analysts say that most people consider religion and nationality to be equal. As Milan Vukomanovic, a sociologist from the Belgrade Faculty of Philosophy, said, “The church has taken its place in the past two decades and one can hardly expect it to leave the space it obtained.”

“The phenomenon arose after direct ethnic mobilisation in former Yugoslavia in the wars of the nineties,” he added. Those wars were fought along ethno-religion lines – among Catholic Croats, Orthodox Serbs and Muslim Bosniaks.

“Despite the fact that the war has ended many years ago, we still don’t see any engagement of the SPC in reconciliation, aid to the poor, et cetera,” Vukomanovic said.

The SPC clerics were widely engaged in wars in Croatia and Bosnia. Some of them went to battle or blessed troops that committed war crimes in the eastern Bosnian town of Srebrenica, where about 8,000 Bosniaks were massacred in 1995.

Although the SPC is not immune to other kinds of scandals, Djordjevic pointed out that the “top clergy never goes to court”, and court practise in Serbia is to allow statute of limitations for cases involving clergy.

The SPC also has a court of its own, the so-called “canon court”, which debates certain cases and suppresses scandal by retiring or mildly disgracing controversial priests. Cases involving paedophilia or embezzlement of church funds rarely end before regular courts.

Despite video evidence of a bishop with young men, for example, or moving stories of suicide attempts by victims of Pahomije, a Serbian bishop, little was done to reach justice. Similarly, a purser at the Patriarchate of Belgrade who stole more than 1.5 million dollars also never went to court.

The public now awaits the traditional SPC assembly, due to be held from May 21 to June 3. The assembly resembles a church parliament that debates the most current developments in all dioceses.

A highly placed source at SPC who insisted on anonymity told IPS that the scandals would not be on the agenda, and when asked whether the accountability of Bishops Atanasije and Amfilohije for their rally speeches will be discussed, he responded, “That is out of question.”