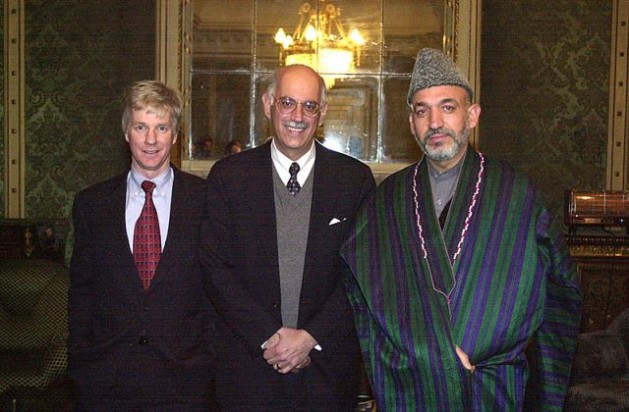 May 8 2013 (IPS) - When a Southeast Asian country was riddled with corruption in a bygone era, there were rumours that government officials routinely offered receipts every time they accepted a bribe.

Last week, Hamid Karzai, the embattled president of Afghanistan, admitted that he was no better: providing receipts to the U.S. Central Intelligence Agency (CIA), which secretly bribed him with “bags of cash dropped off regularly at the presidential palace”.

"If the U.S. ever stood for good government and democracy, it does not any longer." -- Michael Ratner of the Centre for Constitutional Rights

The New York Times revealed that Karzai was on the CIA payroll, receiving millions of dollars in regular payments for the last decade.

The Afghan president told reporters the CIA money was “an easy source of petty cash” and part of a “slush fund” to pay off warlords and buy their loyalties in a country battling a violent insurgency.

“This is cash,” Karzai was quoted as saying, “It is the choice of the U.S. government.” He was not allowed to disclose the amounts of the CIA payments, he said.

While the United States preaches “good governance” to developing countries at the United Nations, says one African diplomat, “it has been doing the reverse in its own political backyard”.

And good governance not only includes multi-party democracy, rule of law and a free press but also transparent and corruption-free regimes.

Michael Ratner, president emeritus of the New York-based Centre for Constitutional Rights (CCR), told IPS, “If the U.S. ever stood for good government and democracy, it does not any longer.”

The U.S. claims it wants democracies in the world, but the only way that democracy continues to exist in Afghanistan, and probably other countries, is because it pays elites, warlords and others to support the governments it installs, he added.

“That is not a democracy, it’s a kleptocracy,” said Ratner, who is president of the Berlin-based European Centre for Constitutional and Human Rights (ECCHR).

The Western powers, he said, are the world’s biggest corrupters, while wringing their hands about “good governance”.

“Remember the planeloads of cash flown into Baghdad to provide baksheesh for the U.S. occupation? In billions. They filled entire cargo planes with 100 dollar bills,” said Paul.

Under the U.S. Anticorruption and Good Governance Act of 2000 (IAGGA), the global fight against corruption remains a foreign policy priority for the United States government.

“Corruption threatens many of our national interests including ensuring security and stability, upholding the rule of law and core democratic values, advancing prosperity, and creating a level playing field for lawful business activity,” says IAGGA.

“Corrupt practices facilitate and contribute to the spread of organized crime and terrorism, undermine public trust in government, and destabilize entire communities and economies.”

Ratner said bribery also gives Karzai’s U.S. handlers, the CIA, control over him and the government.

“If they turn off the spigot flowing money, the Afghan government could fall,” he said, adding that it was a U.S.-installed government not a government of the Afghan people.

“The huge cash payments give the term ‘puppet government’ new meaning,” he argued.

As it is cash, Ratner pointed out, “We don’t really know where the money goes. How much goes into off-shore bank accounts? How much supports money laundering? How much to support those the U.S. might consider terrorists?”

Millions in unaccounted cash goes against every financial control the U.S. has imposed in its efforts to cut off funding to those on its bad guy lists, he noted.

It’s also remarkable, said Ratner, that these millions in cash payments have been revealed and Karzai acknowledges them. “I assume it’s all top secret, classified. Yet, no repercussions from spilling the beans.”

Remarkably and significantly, he said, there have been no efforts to turn off the spigot.

“The U.S. has sunk to a new low. The Romans probably paid off the Huns for a while; in the end, the empire fell,” he said.

The United States, which has had no qualms about bribing the Afghan government, has also signed and ratified the 2003 U.N. Convention Against Corruption (UNCAC), the first global legally binding international treaty against bribery and corruption.

The treaty has been signed by 140 countries and ratified by 165. The United States signed it in December 2003 and ratified it in October 2006.

While the UNCAC remains the overarching global framework against corruption, the United States says it “encourages governments to establish shared approaches through regional instruments and multilateral fora”.

The U.S. government has also promoted joint approaches to deny financial and physical safe haven within the G8 industrial nations and many other fora, promote transparency and codes of conduct.

The United States has also done so within the Asia-Pacific Economic Cooperation (APEC) Forum, and in order to “foster integrity and justice sector reform” through the Good Governance for Development in Arab States (GfD) regional partnership.