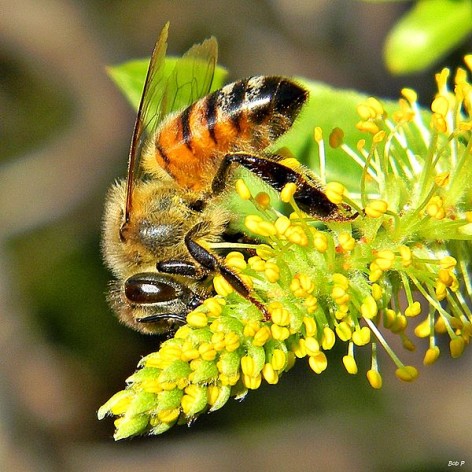 A honey bee in a willow tree. Credit: Bob Peterson/cc by 2.0

ATLANTA, Georgia, Jul 29 2013 (IPS) - Two Congressional Democrats have co-sponsored new legislation called the Save America’s Pollinators Act of 2013 to take emergency action to save the remaining bees in the U.S., and in turn, the U.S. food supply.

At issue is the use of toxic insecticides called neonicotinoids. Recent studies suggest that at least four types of these insecticides are a primary cause of the massive decline in bee populations seen in the U.S. in recent years.

“Our ecosystems are based on pollination of native bees; everything from grizzly bears to songbirds rely on foods that rely on pollination." -- Scott Hoffman Black of the Xerxes Society

It is estimated over 10 million beehives been wiped out since 2007, as part of a phenomenon known as Colony Collapse Disorder.

“Given that EPA allowed many of these insecticides on the market without adequate safety assessments and without adequate field studies on their impact to pollinator health, we feel it’s time that Congress support a bill like the Conyers-Blumenauer bill, which would suspend the use of the neonicotinoids until EPA does the adequate science to prove that these neonicotinoids… are not harmful – and if they are harmful, to keep them off the market,” Colin O’Neil, director for government affairs for the Centre for Food Safety, told IPS.

“One-third of food that’s reliant on the honeybee pollination is really under threat, and threats to pollinators concern the entire food system,” O’Neil said.

During the last winter alone, which began in 2012 and ended early this year, U.S. beekeepers lost 45.1 percent of the colonies they operate, with some beekeepers losing 100 percent, according to a government-sponsored study.

The European Union has already imposed a two-year moratorium on several types of neonicotinoids, after the European Food Safety Authority found in January 2013 that certain neonicotinoids were threatening Europe’s bee populations.

In May 2013, the U.S. Department of Agriculture and U.S. Environmental Protection Agency (EPA) issued a joint study noting that, “Acute and sublethal effects of pesticides on honey bees have been increasingly documented, and are a primary concern.”

The proposed legislation, by Rep. John Conyers and Rep. Earl Blumenauer, would require the EPA to suspend the use of at least four neonicotinoids, including imidacloprid, clothianidin, thiamethoxam, and dinotafuran.

The legislation would prevent the EPA from re-authorising the use of the chemicals as pesticides until the agency conducts a full review of the scientific evidence. It would have to determine there are no unreasonable adverse effects on bees or other pollinators or beneficial insects before allowing them back on the market.

Through their pollination activities, by which bees allow plants to reproduce, bees are responsible for over 125 billion dollars in global food production, including over 20 billion dollars in the U.S., according to the legislation’s findings.

“Recent science has demonstrated that a single corn kernel coated with a neonicotinoid is toxic enough to kill a songbird,” it says.

In June 2013, over 50,000 bumblebees were killed in Wilsonville, Oregon, as a direct result of exposure to a neonicotinoid that was used not as a pesticide, but to cosmetically improve the appearance of certain trees.

So many bees have already died in the U.S. that just one more bad winter here could cause a major food crisis, one U.S. Department of Agriculture scientist said in the recent report.

O’Neil notes the U.S. House recently approved an amendment to the Farm Bill that would establish an interagency consultation process on pollinator protection, and would establish a task force to address bee decline.

“Passage of that was the first indicator this summer that members of congress were really waking up to this issue,” O’Neil said.

“We feel this bill [Conyers-Blumenauer] is necessary because the bees are dying now, and we can’t wait four years down the road to come to the conclusion that pesticides are killing bees,” he said.

The Centre for Food Safety recently sent an email to their members asking them to contact Gina McCarthy, the new head of the EPA, to encourage her to take action to benefit bees. McCarthy is believed to be a strong proponent of environmental stewardship.

“We’re hoping she’s going to be a better steward of bee health at the EPA than her predecessor was,” O’Neil said.

“So they allowed it to be conditionally registered without a field study on the condition this field study would still be received. Ten years later this requirement has never been met and the EPA continues to allow the use,” O’Neil said.

When asked what would happen to te U.S. diet if there was a bee collapse large enough to eliminate pollination across the nation, Hoffman Black said that crops like wheat and corn, which do not require pollination, would still be available.

“Vegetables, fruits, nuts, all things that are highly nutritious and taste really good,” would be eliminated, Hoffman Black said. “We would have rice and wheat.

“Our ecosystems are based on pollination of native bees; everything from grizzly bears to songbirds rely on food that rely on pollination,” he said.