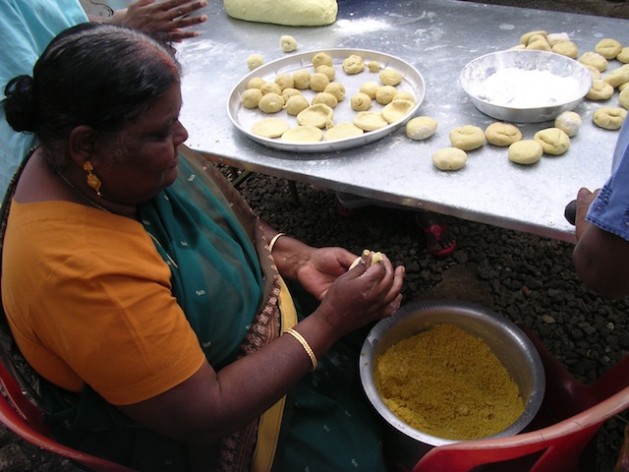 Since Mauritius eased the procedures for obtaining a business permit a year ago, small businesses are cropping up all over the island. People have started selling food, vegetables, fruits, small luxurious items and clothes. Credit: Nasseem Ackbarally/IPS

PORT LOUIS, Jul 11 2013 (IPS) - Raja Venkat, a food vendor on the sidewalk of Immigration Square in the centre of Port Louis, the Mauritian capital, sits on his tricycle with a bag full of dhal puris – small, round, flat Indian bread stuffed with pulses – which he sells together with tomato sauce and bean curry.

Thousands of small businesses like this have sprung up in every town and village on the island since the government eased the procedures for obtaining a business permit a year ago.

“At times, I helped in masonry, in vegetable transportation or washing vehicles. I was available for any job, but most of the time I was unemployed,” Venkat tells IPS.

“Net employment creation in small and medium business between 2000 and 2011 is estimated to be 67,800, i.e., an increase of more than 36 percent, as compared to an increase of 14,400 in large establishments.” -- Mauritian Minister of Business, Enterprise and Cooperatives Jim Seetaram

The unemployment rate stood at 8.6 percent at the end of 2012, according to figures obtained from Statistics Mauritius, the official organisation responsible for collection, compilation, analysis and dissemination of statistical data. And the easing of procedures for obtaining a business permit has been aimed at reducing unemployment in this Indian Ocean island. Official figures from Statistics Mauritius indicate that the total number of business activities increased from 133,723 to 138,236 in 2012.

Since he started his small business six months ago, after paying the required fee (about 50 dollars a year to the Municipality of Port Louis) for his business licence, Venkat now has a steady income. His wife, Aashna Venkat, cooks the dhal puris in the small wooden kitchen of their home at Terre-Rouge, four km away.

“I now earn enough to feed the family and also to save some money for the future,” this father of two children, aged six and three years, says.

Many other people have started similar businesses on the island, selling food, vegetables, fruits, small luxurious items and clothes. Some have opened small mechanical workshops where they repair bicycles and motorcycles. Many women, particularly from Muslim families, have developed the art of applying henna to the hands.

Minister of Business, Enterprise and Cooperatives Jim Seetaram tells IPS that there are more workers in these small and medium businesses than in the larger establishments.

“Small and medium businesses are the main drivers of job creation and contribute in a significant way to economic growth. They employ around 250,000 people, representing more than 44 percent of the total number of jobs.”

Mauritius Chamber of Industry and Commerce’s chairperson and business consultant Ganesh Ramalingum tells IPS that these microenterprises are very important to the economy because they create jobs.

“A person who has some mechanical skills opens a business of repairing bicycles and motorcycles. He’ll need one or two people to help him … So, many jobs are being created in this way and that’s good for the economy. People who earlier had difficulty earning a living are now creating their own businesses in fields that suit them,” he says.

Local authorities regulate these small businesses. They are not supposed to get involved in any unusual activity in a residential area, or disturb neighbours at unreasonable hours or pollute the environment with dust, fumes or odours. They are required to comply with the guidelines issued by the Fire Services, the Sanitary Authority and the Environment Ministry. But many feel that these small businesses are not complying with the guidelines.

Ganeshen Mooneesawmy, vice chairperson of the District Council of Rivière du Rempart that issues and monitors business permits in the northern part of the island, is happy that these people are working, but finds that many of them lack discipline in running their business.

“They won’t ask for jobs from the government as there (are) none available … (but) they sell food in an unhygienic manner and they disturb the living environment in their area. We have very few staff to keep a check on them,” he tells IPS.

In Goodlands, northern Mauritius, small businesses operate literally on the sidewalks in spite of a law that prevents this. Many of them put their goods in large baskets that they place on wooden or iron stands on the sidewalks.

Ashok (full name not given), a vendor, tells IPS he has to do this to attract clients because his business is very small.

“There is so much competition around from big stalls and also from smaller businesses around. If you don’t fight, you don’t eat tonight,” he says.

Municipal Councillor Kritanand Beeharry of Curepipe, a town in the southern part of Mauritius, chairs the Municipality’s Health and Sanitation Committee. He tells IPS that his staff has inspected some of these small businesses after receiving complaints from residents. “The police is also solicited when the need arises,” he adds.

However, he finds more positive points than negative ones in these modest endeavours, as “these small businesses are easy to manage”.

But councillor Prakash Bhunsee of the Flacq District Council in eastern Mauritius believes the situation has gotten out of control.

“I am afraid the police only check the licences of the small entrepreneurs and is not concerned with health, sanitation, environment or pollution matters,” he says.

The shortage of staff at the municipal inspectorate level makes it obvious that many of these businesses go unchecked for months.