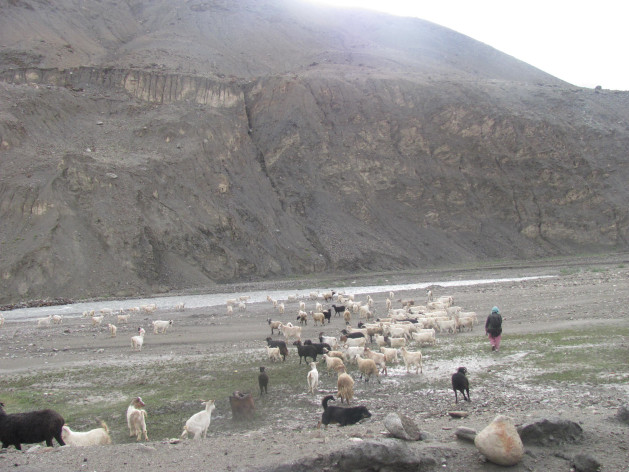 A Changpa woman takes her Pashmina goats out near Kharnak in Ladakh. Credit: Athar Parvaiz/IPS.

CHANGTHANG, India , Sep 5 2013 (IPS) - The famed pashmina shawl that keeps the cold away – in style and at a price – could itself have become the victim of winter. Thousands of goats whose fine wool is weaved into pashmina have perished in extreme cold being associated with climate change.

Pashmina is drawn from Changra goats found in Ladakh region of Kashmir state and a part of the Tibetan peninsula, more than 14,000 feet above sea level. The peninsula is often called the Roof of the World.

Little grows in these areas where the temperature can drop to minus 35 degrees Celsius. The local Changpa nomads live off their herds of sheep, yak and goats.

The Changthang region of the larger Tibetan Plateau does not normally see heavy snowfall, though. That may now be changing, given the heavy snowfall earlier this year that deprived the Changpas of fodder for their animals.

“In the past five years this is the second time I have seen such heavy snowfall,” Bihkit Angmo, 53, who rears goats, told IPS outside her tent in Kharnak, a nomadic settlement 173 km east of Leh, the capital of Ladakh. “This new trend of snowfall several feet high has left us quite worried.”

"If things continue this way, Pashmina-goat rearing will come to an end in the next two decades."

Summer last year brought its own problems, leaving areas parched and barren. “It was terrible, we had to go long distances to find suitable pasture for our livestock,” said Angmo.

This summer melting snow brought some greenery back but not before serious loss. The District Sheep Husbandry Office at Leh puts the number of goats lost due to weather upheavals at 24,624.

This has seriously jeopardised the pashmina business. Wool from the goat is extremely warm, given the cold the animal has to survive in. With a diameter of 14-19 microns, strands of pashmina are said to be six times finer than human hair.

Kashmiri craftsmen have used these for generations to make the renowned pashmina shawl, woven with hand and often embellished with fine embroidery. A pashmina shawl can cost about 200-600 dollars.

Pashmina exports fetched 160 million dollars in 2011-2012, according to the state government’s economic survey.

Now, given the extremes of summer and winter, goats are dying either of starvation or of hypothermia.

Angmo’s is one of few families that have stayed behind in Kharnak to still rear Pashmina-producing goats. Some 83 families out of a total of 98 have migrated from this area, according to Mohammad Sharief, the district sheep husbandry officer at Leh.

“For the past several years,” he told IPS, “our surveys show that five to 10 families from the Changthang area migrate to Leh city every year.”

According to Sharief, there are an estimated 2,500 Changpa families managing about 200,000 goats in Changthang. Each goat produces 250 grams of wool in a season. The wool sells at about 35 dollars a kilogram.

Forty-three-year-old Motub Angmo is among those who migrated from Kharnak four years back to settle in Leh. The hard mountain life had got to him, he said, and they moved out after selling off the 300 goats the family had.

“Now that we have no livestock, we go and work as labourers,” he told IPS. His five children go to a proper school now in Leh. The mobile schools that the government had set up for nomads in the mountains did not succeed.

If things continue this way, Sharief said Pashmina-goat rearing would come to an end in the next two decades.

That would also mean the end of the livelihoods for about 300,000 people in the Jammu and Kashmir state of India who depend on pashmina directly or indirectly, according to Shariq Farooqi, director of the Craft Development Institute in Srinagar, the summer capital of the state.

“We all rely on pashmina for making shawls,” Ashraf Banday, a pashmina trader in the city, told IPS. “Any threat to its production means a threat to our livelihood.”

As it is, he said, the Kashmir pashmina industry is suffering because of duplicate products in the market. “Any decline in pashmina production will make it even more vulnerable.”

According to Sharief, India’s textile ministry has woken up to the problem of the migrating Changpas and initiated measures to encourage them to stay back. “We have a budget of Rs 70 million (1.2 million dollars) this year to stock feed in fodder banks to be used in winter,” he said. “We are also planning to provide tents and shelters to the nomads.”

His department is making an effort to relocate families in Leh back into Changthang. “Last year we relocated two families in Kharnak and created mini-farms for them by giving them 50 animals each free of cost,” said Sharief.

Once they are established, some goats will be retrieved from them and given to other families. Sharief hopes the cycle can continue till most of the families are relocated.

The threat to Pashmina goat-rearing will also mean an end to the unique culture of the Changpas, Sharief said. Most of them are followers of Tibetan Buddhism and have an elaborate set of customs centred around their livestock. Traditionally, the nomads were also polyandrous, though that is changing with the younger generation.