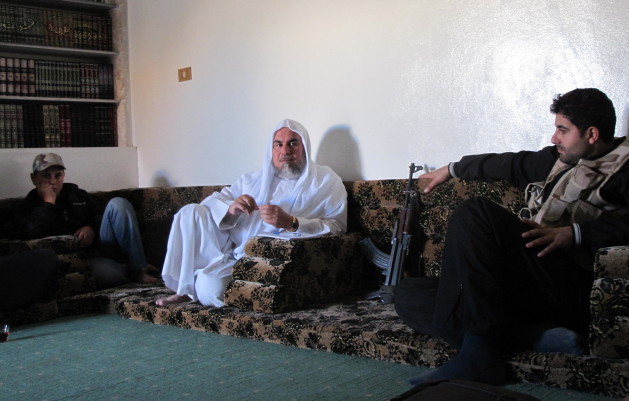 IDLIB PROVINCE, Syria, Nov 21 2013 (IPS) - Concerns are rising that courts run by Islamic clerics in many of Syria’s rebel-held areas may serve as a prelude to Taliban-style justice in what was long a violently repressive but secular state.

Many on the ground counter that they are the sole viable option in the present circumstances and should not be confused with the more extreme form that the Al-Qaeda-affiliate, the Islamic State of Iraq and Al-Sham, or ISIS, attempt to impose on the areas under their control.

Former judges trained by the regime are distrusted even if they now express support for the uprising, IPS was told by residents of several small towns in the Idlib province in northwestern Syria. A large portion of the Muslim clerics running the courts, on the other hand, have served time in jail under the Assad regime or have relatives that have, a view that confers a certain degree of ‘legitimacy’ on them in the public’s and fighters’ eyes.

"Islam is democracy. Under the regime, everything was about money. You could just pay to get a murder ruled to be ‘in self-defence’.”

Leaders of many of the major rebel factions, including the Suquor Ash-Sham, Al-Tawheed and Ahrar Ash-Sham Brigades, have spent time in the notorious Sednayah prison near Damascus, known for housing mainly political and Islamist prisoners. Former imprisonment under the regime is seen as evidence of a pro-revolutionary position.

The Muslim cleric Sheikh Hamdan Khattab, who heads a local court with jurisdiction for part of the Idlib province, told IPS that he hadn’t seen his brother in over 30 years due to his suspected links with the Muslim Brotherhood. Syrian law has prescribed the death penalty for membership of the group since 1980.

Sheikh Khattab told IPS that according to sharia law, “until we have a president no rulings can be enforced,” and sentences must be suspended during times of war. This does not seem to apply to certain ‘war crimes’ in the present circumstances committed by fighters, however.

A Palestinian detained for belonging to one of the regime-linked irregular militias, the shabiha, and charged with multiple rapes and murders, has since IPS spoke to him in September been executed following a trial at a court in Bab Al-Hawa near the Turkish border.

The local Suqour al-Sham leader, Maher, whose men captured and interrogated the man before handing him over to the larger court, said most of the arrests his men made were for stealing. This came especially after he was ordered by the local sharia court to crack down on growing lawlessness and looting by thieves from an area nearby over which tribal clans hold sway.

Sentences of between six months and one year in detention are commonly given for theft, he said.

On issues of fighting between tribal clans, however, sharia courts refuse to adjudicate, much as the Assads long have, Sheikh Aid Hussein, leader of the Al-Damaalkha clan, told IPS on a recent visit to one of his homes not far from Maarret An-Nu’man, a city in rebel hands but almost entirely destroyed by government shelling.

He said that the regime had always allowed them to settle their own disputes and feuds, with the amount of blood money to be paid for murders and specific conditions of settlements decided by tribal leaders and elders.

Many Muslim clerics say they make recourse to the Unified Arab Code, a sharia-inspired code agreed upon by Arab League justice ministers in 1996. They say those trained solely in sharia law are often flanked by lawyers acting as legal advisors in rebel-held areas.

Islamic fiqh is cited as the main source of legislation in both of the constitutions introduced by the Assad family, in 1973 and 2012. However, secular penal and commercial codes have long been used under the Baath regime, leaving only civil (personal status) law based on sharia.

Women have long suffered unequal status under Syrian law, and what remains of Islamic norms in regime law books typically weighs most heavily on them. If a rapist marries his victim then no crime has officially been committed, for example. Sentences are reduced for ‘honour killings’ of female family members.  Syrian law considers women legal dependents of their fathers and husbands.

In both the tribal and sharia systems and in most of the civil administration councils, women are entirely excluded from decision-making.

Though discriminated against under the regime, there were active women lawyers across the country prior to the uprising. Heba, a lawyer involved in documenting the torture of women and girls in regime detention and the reported chemical attack in Saraqeb, a city in the northwestern part of the country, told IPS that “women were just never promoted; they stayed in the same entry-level position for decades, while men moved up.”

But “we don’t need a new legal system,” she said.

Currently staying in southern Turkey’s Hatay region out of concerns for her safety, Heba – wearing a hijab and a threadbare coat she hugs around herself in the crisp autumn air – said that “the problem was never the legal system. It was the arbitrary arrests, the systematic torture used by the regime, the corruption.”

What the international community fails to recognise – she implied in discussing the case of a girl who reportedly had had both legs amputated and been raped repeatedly in detention – was that ‘sharia justice’ had not been behind the many atrocities etched in Syrians’ collective memory.

Islam is also viewed by many of the fighters as more egalitarian, as in theory all are supposed to be “equal before god” under it.

“I just want to be treated with dignity,” one rebel fighter told IPS.

“And Islam is democracy. Under the regime, everything was about money. You could just pay to get a murder ruled to be ‘in self-defence’,” he said.