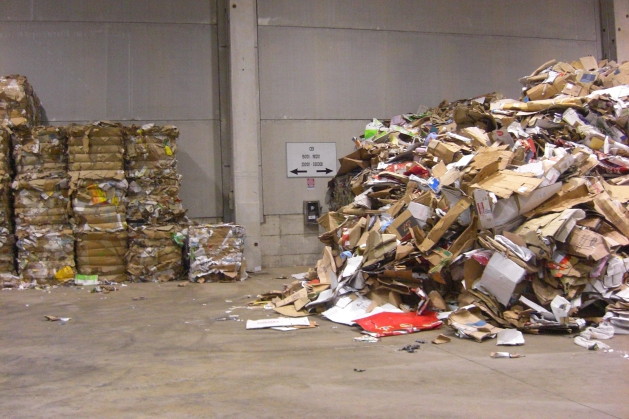 Recycling at last near Naples. Credit: A. D. McKenzie/IPS.

NAPLES, Nov 18 2013 (IPS) - Before one reaches the premises of the Società Recupero Imballaggi (SRI), the smell in the air announces that this company in the southern Italian region of Campania deals with waste.

The strange chemically tinged aroma invades one’s nostrils, making one feel the need to don a mask. At the company itself, workers in protective gear busily sort plastic bottles, paper packaging and other substances, while another division transforms some of the waste into secondary raw materials that can be reused by industry.

The quantity of waste is striking: a constant stream of plastic bottles of various colours; hills of cardboard; giant stacks of paper. Italy has long had a waste management problem, and plants like this are an attempt to find solutions.

But Italy is not alone. As the current European Week for Waste Reduction (Nov. 16 – 24) is highlighting, many countries in the 28-member European Union need to work harder to decrease the amount of waste generated.

“EU legislation has already driven the beginning of a revolution in European waste management,” says Janez Potočnik, the EU’s Environment Commissioner. “We are composting and recycling more than ever, and landfill is progressively falling – but of course some member states are far ahead of others in this.”

According to figures from the statistics directorate Eurostat, the EU generates some 3 billion tonnes of waste annually, of which 90 million tonnes are hazardous. By 2020, the bloc could be generating 45 percent more waste than it did in 1995.

Among the recalcitrant siblings in the EU family, Italy is a special case, attracting the attention of both EU officials and international environmentalists. Naples, capital of the Campania region, has been seen globally as a textbook case of bad waste management policies, where illegal disposal of waste by criminal syndicates has caused widespread environmental pollution.

The air, soil and water contamination has come from the burning and dumping of waste by the so-called ecomafia, and experts believe the pollution is linked to increased rates of cancer and other diseases in the region that are above the national average.

Now trying to cleanse its image and raise public awareness, Naples hosted the 10th International Media Forum on the Protection of Nature earlier this month, organised by the Rome-based environmental group Greenaccord.

Titled ‘People Building Future: A Future Without Waste’, the annual conference brought together experts, journalists and educators from around the world in yet another initiative to emphasise the need to reduce waste to shield the environment, mitigate climate change, and protect health.

“There is sufficient evidence that atmospheric pollution causes cancer,” said Federico Valerio, a scientist at the National Institute for Cancer Research in Genova and a participant in the conference. “We need to change how we deal with environmental pollution.”

Rosario Capone, a teacher at the Osvaldo Conti technical school near Naples, said that both educators and students were fed up with the slow political response to the pollution problems and their impact on health, and she called for urgent political action.

“There are teachers and students at our school who have been diagnosed with cancer, so we personally see the effects,” she told journalists. “We all want to see solutions to the problem.”

Answers at the national level may be slow in coming, however. The Italian government has been involved in a court case with the European Commission over the “inadequate treatment of waste” that is landfilled in the Lazio region north of Naples. The government and the Commission disagree on what constitutes sufficient treatment of waste.

According to the EU, “landfills operating in breach of EU waste legislation constitute a serious threat to human health and the environment.”

The EU wants to phase out landfilling. But in the meantime, Commissioner Potočnik said that the priorities were to reduce the waste generated per person, to maximise recycling and re-use, and to limit incineration to non-recyclable materials.

Besides the court case, the EU is taking regulatory action to get its member states to deal with their waste. Earlier this month, the Commission adopted a proposal that requires states to reduce their use of lightweight plastic carrier bags.

According to the Commission, lightweight plastic bags are often used only once, but they can last in the environment for hundreds of years and are particularly dangerous to marine life.

“Some member states have already achieved great results in terms of reducing their use of plastic bags. If others followed suit we could reduce today’s overall consumption in the European Union by as much as 80 percent.”

The Danish government, for instance, imposed taxes on plastic bags and has seen the use of thin plastic bags drop to an estimated four bags per person each year – the lowest in the EU, according to the Commission.

Italians, meanwhile, use a total of about 20 billion plastic bags per year, according to environmentalists, and one only has to glance at the polluted Bay of Naples to see the results.

“The destructive levels of consumption must end,” said William Rees, inventor of the “ecologicial footprint” concept and a keynote speaker at the Naples conference.

“We need to become much more activist regarding the environment, and to push for change,” he told IPS.