The Sickest Places in the World 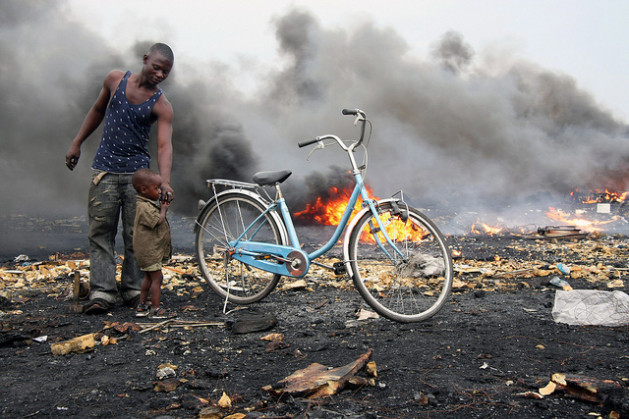 The Agbogbloshie e-Wasteland in Ghana. Fires are set to wires and other electronics to release valuable copper and other materials. The fires blacken the landscape, releasing toxic fumes. Credit: Blacksmith Institute

UXBRIDGE, Canada, Nov 5 2013 (IPS) - Parts of Indonesia, Argentina and Nigeria are among the top 10 most polluted places on the planet, according to a new report by U.S. and European environmental groups.

They are extraordinarily toxic places where lifespans are short and disease runs rampant among millions of people who live and work at these sites, often to provide the products used in richer countries.

“People would be shocked to see the conditions under which their lovely jewelry is sometimes made,” said Jack Caravanos, director of research at the New York-based Blacksmith Institute, an independent environmental group that released the list Monday in partnership with Green Cross Switzerland.

The Most Polluted Places in 2013 (unranked)

In Kalimantan, Indonesia, local people extract gold using mercury, which is both poisonous and a potent neurotoxin.

“They do this processing inside their homes, not realising the danger,” said Bret Ericson, senior project director of the Blacksmith Institute.

Blacksmith has gone into those homes and measured mercury levels 350 times higher than what is considered safe, Ericson told IPS.

This directly affects the health of 10 to 15 million people, Ericson said. “It is also a huge source of mercury pollution worldwide.”

Once released into the environment, mercury can end up in fish and other foods people eat anywhere on the planet. Low-cost, mercury-free methods for gold mining do exist but this knowledge is not widespread, he said.

The Top Ten Toxic Threats report is the latest in a series of annual reports documenting global pollution issues. The list is based on the severity of the health risk and the number of people exposed.

Previous reports have documented that the disease burden of pollution is comparable in scope to tuberculosis or malaria, posing a threat to 200 million people. Globally, one-fifth of cancers and 33 percent of disease in children can be blamed on environmental exposures, but this is far higher in low income countries, the report notes.

The Blacksmith Institute has conducted more than 3,000 initial risk assessments in 49 countries since the last list of polluted sites released by the two groups in 2007. Some sites listed in 2007, such as the lead battery recycling site in Haina, Dominican Republic, have been fully remediated.

“The good news is countries like India have come to grips with their pollution problems,” said Ericson. India has imposed a “Clean Energy Cess” or coal tax to help fund a clean energy fund of up to 400 million dollars which will inventory and clean up contaminated areas.

However, one of the emerging issues around toxic hotspots are clusters of poorly-regulated small-scale industries now found in many countries. There are more than 2,000 industries along the Citarum River in Indonesia, contaminating an area 13,000 sq km in size with lead, mercury, arsenic and other toxins, the report found.

“Clean-up is beginning thanks to a 500-million-dollar loan from the World Bank, but it will take a decade or more to complete,” said Ericson.

Near Buenos Aires, Argentina an estimated 50,000 small-scale industries dump a toxic mix of chemicals and metals into the air, soil and water. At least 20,000 people living along the Matanza Riachuelo river are exposed to dangerous levels of toxins, the report shows. The World Bank is also funding a major clean-up, with Blacksmith providing technical support.

Some toxic hotspots are so big and so badly polluted it will cost billions of dollars and take decades to clean up, said Stephan Robinson of Green Cross Switzerland.

“There are places that will be on our list for many years,” Robinson told IPS.

Russia has two of these. Russian authorities have finally acknowledged the issue and set aside three billion dollars to clean up Soviet-area legacy sites. One of these is Dzerzhinsk, a city of 300,000 people where chemical weapons like sarin, VX gas, mustard gas, and phosgene were manufactured for 50 years. At least 300,000 tonnes of waste from their manufacture were disposed of in the groundwater.

Birth defects are very common and the average lifespan of residents has fallen to the low forties. The situation is similar in Siberia’s Norilsk region, where the world’s biggest nickel smelter has killed all the trees within a 30-km radius.

“There has been lots of talk about improving pollution controls in Norilsk but not much action,” said Robinson.

A new site that will be on the list for years is the very polluted Niger Delta in Nigeria. Millions of barrels of oil have been spilled over the years and a U.N. study found two-thirds of the sites tested to be highly contaminated. Petroleum and its byproducts are very toxic, and when combined with poor nutrition, are a major unrecognised health threat for the 30 million people who live there, the report noted. The U.S. has been the major export destination for Nigerian oil.