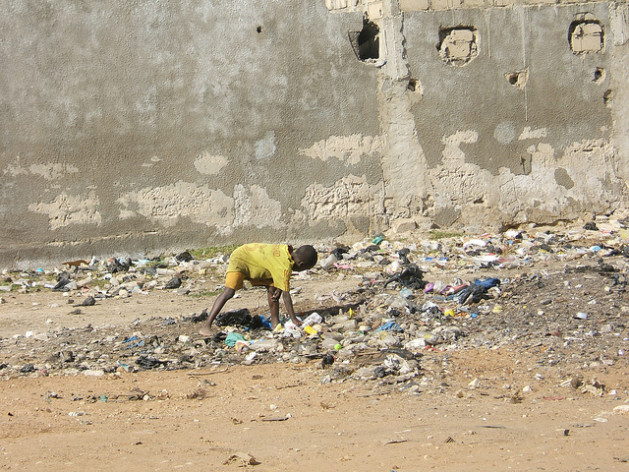 A child at a lead-contaminated site. Credit: Blacksmith Institute

UXBRIDGE, Canada, May 9 2013 (IPS) - Toxic waste sites in 31 countries are damaging the brains of nearly 800,000 children and impairing the health of millions of people in the developing world, two new studies have found.

Toxins and pollutants in the environment are major sources of illness and reduced lifespans globally. The impacts on health in some countries are on par with malaria, said Kevin Chatham-Stephens, a pediatric environmental health fellow at the Icahn School of Medicine at Mount Sinai.

"We have found lots of nasty sites out there but we don't have the money to clean them up." -- Bret Ericson of the Blacksmith Institute

“We were surprised that health impacts of living near toxic sites were on par with other well-known threats to public health such as malaria,” Chatham-Stephens told IPS.

In one study researchers found elevated levels of lead, chromium and other chemicals in soil and water samples near 373 toxic waste sites located in India, the Philippines and Indonesia. Nearly nine million people live near these sites and researchers calculated that the likely impact from diseases caused by exposure to these chemicals amounted to 828,722 lost years due to ill-health, disability or early death.

The “lost year” metric is known as disability-adjusted life years (DALY), a measure of overall disease burden used by the World Health Organisation. One DALY represents the loss of one year of equivalent full health.

“Lead and hexavalent chromium proved to be the most toxic chemicals and caused the majority of disease, disability and mortality among the individuals living near the sites,” said Chatham-Stephens, co-author of the study published this week in Environmental Health Perspectives.

The study was done in partnership with the Blacksmith Institute, a small international NGO based in New York City investigating the health risks of toxic sites in low and middle income countries. Blacksmith publishes the annual “World’s Worst Pollution Problems Report” to raise awareness and funding to help clean-up the worst sites.

Toxic sites “fly under the radar” in terms of public health awareness and action. Little research has been done on the health impacts of chemical pollutants in developing countries.

“This is the first estimate of the burden of disease resulting from living near toxic waste sites,” said Chatham-Stephens.

Previous studies have shown that lead can cause neurological, gastrointestinal and cardiovascular damage. Exposure to high levels of chromium has been shown to increase chances of developing lung cancer.

“This study highlights a major and previously under-recognised global health problem in lower and middle income countries,” said Philip Landrigan, MD, MSc, dean for Global Health at the Icahn School of Medicine and a co-author.

“The next step is targeting interventions such as cleaning up the sites and minimising the exposure of humans in each of these countries where toxic chemicals are greatly present,” said Landrigan.

In a second study, researchers measured lead levels in soil and drinking water at 200 toxic waste sites in 31 countries, then estimated the blood lead levels in 779,989 children who were potentially exposed to lead from those sites. They found that their blood lead levels were likely very high, 15 to 20 times higher on average than children in the U.S.

“Lead has serious, long-term health consequences such as the potential to impair cognitive development in children and cause mental retardation,” said Chatham-Stephens.

Based on these findings, Chatham-Stephens estimates a loss of five to eight IQ points per child and an incidence of mild mental retardation in six out of every 1,000 children.

Increased cardiovascular disease is another impact from lead exposure but wasn’t part of the study. “We couldn’t account for every health impact,” he said. “We hope these studies raise awareness and result in on-site disease surveillance, including measurements of blood lead levels in children.”

Given the very high levels of toxins at some sites, targeted clean-up is also an urgent issue, he said.

“(Toxic sites) are a major public health problem that is hiding in plain sight,” Bret Ericson of the Blacksmith Institute previously told IPS.

“We have found lots of nasty sites out there but we don’t have the money to clean them up,” Ericson said.