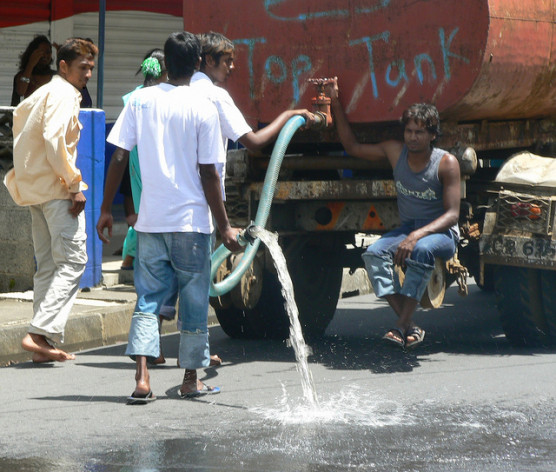 WASHINGTON, Dec 4 2013 (IPS) - As government representatives gather Tuesday in Indonesia for what could be final negotiations towards a global trade agreement under the World Trade Organisation (WTO), environmentalists and social justice campaigners are urging them to specify that water resources cannot be treated as commodities.

Critics of the privatisation and “financialisation” of natural resources are pointing to mounting interest by multinational investors in viewing common water resources as tradable, a change that development advocates worry could impact particularly on poor and marginalised communities. While international agreements enshrined a universal right to water (and sanitation) in 2010, international trade agreements have yet to follow suit – a gap that some say is becoming increasingly dangerous.

“These entities have made bets that water will eventually be distributed and sold much like petroleum is today." -- William Waren

“Our concern is that the financialisation and privatisation of water is already very much a long-term goal of major multinational companies and investors,” William Waren, a trade policy analyst with Friends of the Earth U.S., a watchdog group, told IPS.

“These entities have made bets that water will eventually be distributed and sold much like petroleum is today. They know that global warming will make water resources increasingly scarce, so they want to get ahold of these resources and eventually sell it at their asking price.”

Of those who have made such bets so far, Waren mentions Suez Environment, the French water giant, as well as T Boone Pickens, the U.S. oil tycoon-turned-alternative energy magnate. Regardless of where these investors are based, however, their focus is international.

Just ahead of the start of the WTO ministerial talks, taking place Tuesday through Friday in Bali, Friends of the Earth International offered a series of case studies on the experiences of a dozen countries around the financialisation of common water resources. The report argues that a confluence of international financial institutions and corporations are “paving the way” for this process.

Yet these forces are being offered crucial aid by international trade agreements, both the vagaries of current accords and the more explicit strategies in those still under negotiation, particularly spearheaded by the United States.

These “key drivers of the deregulation and liberalization processes that have opened the water and sanitation sectors to corporate profiting-making, and as key building-blocks to the architecture of impunity that protects it,” the report states.

“Standing out amongst them are the new and increasingly less transparent and non-democratic modalities of transoceanic partnerships led by the United States … and the World Trade Organization’s agenda on environmental services.”

Key in this discussion is an international trade agreement signed more than a half-century ago. The predecessor to today’s WTO, created in 1995, was an accord known as the General Agreement on Tariffs and Trade (GATT).

Today, GATT provisions continue to coordinate policy for the trade in physical goods. Yet Waren says neither GATT nor the WTO has ever clearly defined what constitutes a “good” or whether it includes water.

“The traditional view in international law is that water belongs to the public commons, so back in 1948 there was no consideration of what the big corporations are contemplating today – the complete control of the system from well to tap,” he says.

“So, we need to make sure there’s language in new trade agreements offering specific assurances that water is regarded as part of the public commons that is not a good or product.”

Likewise, the WTO’s discussion on trade in services remains under negotiation, largely made up of countries offering their own commitments. Yet thus far no country has made substantive commitments regarding domestic water supplies, while advocates worry that a suite of GATT commitments could substantially increase corporate control over common water resources.

Meanwhile, this week’s discussions in Bali are being seen as a last chance for the WTO to come to a multilateral agreement, as negotiations have dragged on under the current round of talks for a decade. Amidst mounting frustration, much of the momentum has instead shifted to state-to-state trade treaties and investment agreements.

Two of the largest ever contemplated are currently under negotiation, both led by Washington: the 12-member Trans Pacific Partnership and another free trade area between the United States and the European Union. If the two were to come to fruition, they would cover the vast majority of the world’s economy.

Yet these so-called U.S. models also come with stringent pro-business requirements and quasi-judicial enforcement mechanisms that put investors on the same level as sovereign states.

“There is a clear and present danger in these investment agreements, and water policy is an almost constant issue,” Waren says.

“Part of the problem is that much of investment case law has an explicit right to export. So countries acting to deal with a dwindling water supply, especially in the Global South, may not realise they’re giving the right to investors both to make investments and to export.”

And despite the United Nations’ 2010 agreement on the universal right to access to water, the international tribunals that adjudicate disputes under investment agreements typically don’t recognise international humanitarian law. For critics, such a system underlines the importance of the WTO explicitly engaging with the issue of water as a tradable good.

It is somewhat ironic that the push towards increased multilateral financialisation of water could be coming from the United States, where the experience surrounding the privatisation of public water utilities has been notably negative.

The country’s largest private water company, American Water, was formerly owned by a German company. But that owner pulled out in large part due to public resistance towards both private and foreign ownership of water resources.

“There has clearly been resistance to private ownership,” Mary Grant, a researcher with Food & Water Watch (FWW), an advocacy group, told IPS. “Communities have made clear that they want local ownership of their systems in order to control both quality of service and the rates charged.”

FWW surveys have found that investor-owned utilities in dozens of U.S. states have typically charged a third more than those owned by the public, a lack of efficiency corroborated by other investigations. Profit-driven systems also experience problems in deciding where to extend service, with companies at times proving reluctant to do so in low-income areas or very small communities.

“The U.S. experience shows that water privatisation has been a failure,” Grant says. “It hasn’t resulted in better services even while it has led to higher rates and, often, worse service. Local, public provision is the most responsible way to ensure that everyone has access to safe and affordable water.”