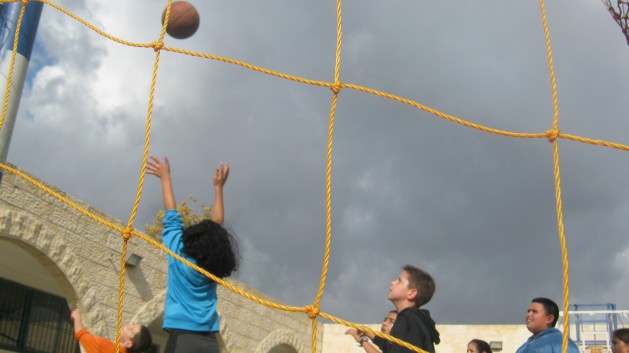 KFAR QARA’, Northern Israel, Jan 27 2014 (IPS) - Welcome to Bridge Over the Wadi primary school, one of five bi-national schools under the “Hand-in-Hand” initiative of the Centre of Jewish-Arab Education in Israel. The centre strives to bring children from both communities to learn together in Hebrew and Arabic in the hope that they’ll bridge the divide between the two peoples.

All in all, there are only seven bi-national school establishments in Israel, amidst 3,000 or so separate Jewish and Arab schools.

But among the few, this one is unique. It’s the only such school established in a town populated by Israelis of Arab descent. Here, Jewish children are hosted by their Arab peers.

Here, Jewish children are hosted by their Arab peers.

“It’s not an Arab school. Actually, we’re strangers in our own environment,” cautions principal Hassan Agbaria. “We have an offer: acceptance of the other, equality in rights, partnership. Peace is achievable by knowing each other and living together, at least at school.”

A Jewish-Arab school – let alone in an Arab town – is no trivial matter in a country where the Jewish majority is in conflict with the Palestinian people to whom the Arab minority belongs. One in five Israelis is an Arab of Palestinian descent.

Israel’s declaration of independence pledges to “uphold the full social and political equality of all its citizens, without distinction of race, creed or sex.”

In effect, the enduring conflict, persistent mistrust and charges of disloyalty to a state which defines itself essentially as Jewish, recurrent suspicions of unequal treatment, and discrimination based on religious-political identities have all left a deep mark on Israel’s Arabs.

The writing is on the school’s walls. “We must be the change that we wish to see in the world,” say Hebrew and Arabic translations of the adage attributed to Mahatma Gandhi. Parents who send their kids to school here answer the call for change from the existing order of things.

“We mustn’t wait for someone to create change,” says Ofri Sadeh from Katzir.

In this area of Galilee, Arab-origin citizens of Israel are the overwhelming majority. About 150,000 Arabs and 20,000 Jews live side by side, and apart.

Arabs make up 60 percent of the school’s 238 pupils. The staff is equally balanced as each classroom is co-taught by Arab and Jewish teachers.

Nothing is simple or utopian on the school benches. The dichotomy lies in the parents’ expectations and motivation. Through their children, Jews aspire to realise the elusive dream of peace and harmony.

“It’s an opportunity for our children to be imbued with values that are important for me and my husband. I want them to become better persons than us,” says Noga Shitrit, a mother of three from Katzir, and an educator at the mixed kindergarten attached to the school.

Arabs, for their children, desire the fulfilment of a no less elusive social promotion. “The best school!” proclaims Kfar Qara’ resident Rania Yahiya.

Second graders pay tribute to Nelson Mandela, pondering on quoted words of wisdom: “Education is the most powerful weapon we can use to change the world.”

“People discriminate against others because of skin colour, language, gender, identity, Jewish or Arab,” stresses the teacher in Hebrew.

“And then comes Mandela,” another teacher chimes in, in Arabic. “He said, ‘We’re different, but equal.’ He had a dream. Which dream?” she asks, mixing up Mandela and African-American civil rights movement leader Martin Luther King.

“May peace prevail,” comes a reply. “Stop the wars,” says another. The class dream their parents’ dream.

The teacher says, “Jews and Arabs are…” “Different!” the class answers in unison. “Different, but equal,” corrects the teacher.

“We instil these educational values so that threads of peace are woven into the fabric of their lives,” says vice-principal Masha Krasnitsky. “They’re fully conscious of bringing fresh ideas to the world. They’re caught in demanding and challenging situations, but they stand up to the test of courage.”

Under their teachers’ guidance, Arab and Jewish kids rejoice in each other’s holidays playfully.

But when national remembrance days are marked – Holocaust Day or the Day of the Fallen Soldiers – old passions are woken anew.

The school’s educators are in pursuit of a magical identity formula which will draw schoolchildren together around a collective experience untroubled by one seminal event’s memory – the creation of the State of Israel (1948) seen on the other side as the Great Palestinian Catastrophe, or Nakba.

“We’re a laboratory for the Israeli society,” says principal Agbaria. “We try to provide answers to questions which Israelis grapple with for over 60 years. Step by step, we come closer to the vision of living here with a declared identity, without fear.”

Playtime, announces the oriental music on the PA.

Hebrew almost naturally dominates kids talk. And though Arabic is, along with Hebrew, officially recognised and, at school, textbooks are in Hebrew and Arabic and kids learn in both languages, beyond the school’s perimeter Arabic is often perceived as the enemy’s language.

As rain falls, children huddle in a tiny corner, looking a lot alike. It’s been 10 years since this schools was set up. That’s also cause for celebration.