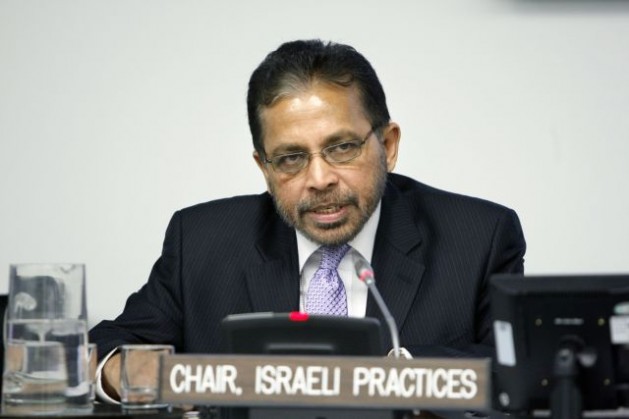 UNITED NATIONS, Jul 30 2012 (IPS) - After a fact-finding tour of the Israeli-occupied Gaza Strip – and following hearings in Amman and Cairo – a three-member United Nations committee has lambasted Israel for the harsh treatment of Palestinian children held in custody.

The Special Committee to Investigate Israeli Practices (facetiously called the Israeli (mal)practices committee) in the Occupied Territories has unleashed a scathing attack on the Jewish state for its continued denial of fundamental human rights of the Palestinians and describing the harshness as totally “unacceptable”.

The chairman of the Special Committee, Ambassador Palitha Kohona, Sri Lanka’s Permanent Representative to the United Nations, has specifically blasted Israeli security forces for the rigorous crackdown on children, mostly accused of hurling rocks at a fully-armed military.

“Children’s homes are surrounded by Israeli soldiers late at night, sound grenades are fired into the houses, doors are broken down, live shots are often fired, and no warrant is presented,” he said.

Worse still, children are tightly bound, blindfolded and forced into the backs of military vehicles, he added.

In an interview with IPS U.N. Bureau Chief Thalif Deen, Kohona said the situation in the Occupied Territories has not improved in any significant manner since his last three official visits to the region.

The Committee was informed by witnesses that there were 192 children in detention, and 39 were under the age of 16, said Kohona, a former chief of the U.N. Treaty Section.

Q: How best would you describe the harsh treatment of Palestinian children by Israeli authorities?

A: The Committee took the view that the occupying authorities were not discharging their international legal obligations towards the people of the Occupied Territories.

For example, the principal result of Israel’s blockade of Gaza has been to render 80 percent of Palestinians in Gaza dependent on international humanitarian aid.

The resilience of Gazans for being able to survive on so little, especially in the face of the inadequate health care, severe constraints on their normal occupations, frequent power outages, and not infrequent incidents of violence that mark their daily lives, is admirable. Israel’s blockade of Gaza is illegal.

Israel’s security needs can surely be met adequately without resort to some of these harsh policies. The blockade, in the view of many, amounts to the collective punishment of 1.6 million Palestinians. It has had a devastating impact on the lives of people.

Many witnesses asked whether some of these harsh policies were really necessary to maintain security or were they actually exacerbating feelings of hopelessness.

Q: Since these human rights violations are taking place in occupied territories, do they amount to a violation of the Geneva Conventions on the treatment of prisoners in conflict situations?

A: There have been many eminent persons who have taken this view, and the Committee agrees with this assessment.

A: The Special Committee has not been permitted to visit Israel, the occupied West Bank and Jerusalem or the occupied Golan. Israel has a policy of not cooperating with the Committee.

Q: Since you have visited the region three times as chairman of the Special Committee, what is your assessment of the Occupied Territories?

A: The situation has not improved in any significant manner. In Gaza, imports remain at less than 50 percent of pre-blockade levels. Eighty-five percent of schools in Gaza work on double shifts.

And Israel’s near total ban on exports from Gaza stifles economic growth and makes job opportunities scarce. Between 30 and 40 percent of Gazans are unemployed. Over 1.2 million Gazans received food aid from the U.N. Relief and Works Agency (UNRWA).

And 90 percent of the water in Gaza is unsafe for drinking. Business has ground to a standstill with little possibility of importing new equipment or exporting products.

Q: What can the United Nations do to improve the situation of Palestinians in the Occupied Territories? Or do you think the U.N. remains helpless against Israeli intransigence?

A: U.N. agencies are playing a major role in keeping the humanitarian situation from deteriorating further but they have also come under stress due to funding shortfalls caused by the global financial crisis. They need further funding from donors.