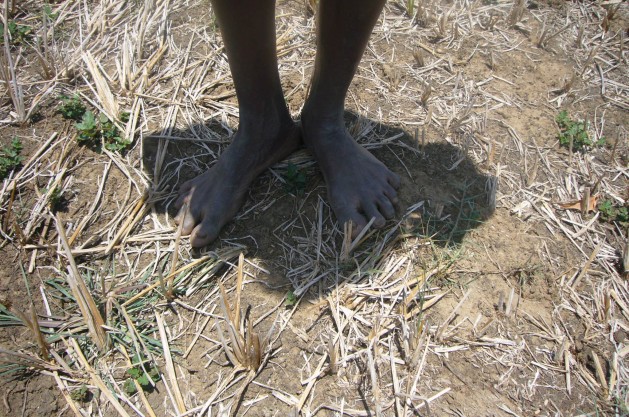 arched soil on a field in Sri Lanka, which could face another cycle of drought and floods. Credit: Amantha Perera/IPS.

COLOMBO, Feb 28 2014 (IPS) - Sri Lanka is heading into a major crisis under extreme heat, as the rains stay away. Fears are growing of power cuts and interruption to the water supply because reservoir levels are running scarily low.

By the third week of February, the Ceylon Electricity Board said it was relying on expensive thermal generators for 76 percent of the country’s power supply.

Around August 2012, extended dry weather almost dried up hydro-reservoirs. The country spent over two billion dollars to import furnace oil. The drought impacted over a million persons, according to the Sri Lanka Red Cross.

Power supply and the vital paddy harvest are likely to be hit if the rains stay away for longer.

The 2012 dry spell was followed by heavy rains that allowed hydro-power to gain lost ground last year. That vicious cycle could be repeating itself.

Central Bank Governor Ajith Nivard Cabraal said last week that changing climate patterns have had a serious impact on the country’s fortunes. “Sri Lanka also is impacted by climate change in the form of droughts, floods and other natural disasters. We take these matters into consideration when framing monetary policy,” he said during a live Twitter interaction.

According to experts, power supply and the vital paddy harvest are likely to be hit if the rains stay away for longer.

Asoka Abeygunawardana, executive director of the Sri Lanka Energy Forum and Advisor to the Ministry of Technology, told IPS that Sri Lanka’s power supply was too dependent on hydro-power or on costly coal and furnace oil.

“We are too reliant on these sources; one can be unpredictable while the other two can be quite expensive,” he said.

In a normal year Sri Lanka looks to harvest half of its power supply through hydro and the remainder through a combination of coal furnace oil and a negligible content of renewable sources. When the rains fail, as they have now, there is no alternative but to turn to more coal and oil.

Abeygunawardana, who is also a board member of the Climate Action Network South Asia, a grouping of over 100 civil society groups that studies climate change and impact, told IPS that Sri Lanka should look at investing more in renewable energy sources. Sri Lanka’s future energy policy is skewed towards coal, which Abeygunawardana said is expensive and polluting.

He advocates wind and solar use which could be cheaper in the long run despite the initial high expenses.

“We get sunlight and wind both free of charge all year round, making running costs quite cheap. In the event of a drought, the strong sun will naturally fill the gap created by lack of water.”

The other important factor is managing the meagre water resources that feed both the power supply and the vast rice fields.

There is some level of dialogue that takes place between government agencies reliant on reservoirs like the Department of Irrigation, and the Electricity Board. But Abeygunawardana said that these discussions lacked scientific basis and planning.

“These agencies have to come up with a process where the release of water is integrated and not done at the wish of one agency.”

Such policy changes are vital given the potential impact the scorching heat is packing. The current dry spell is likely to reduce the main rice harvest by seven to 10 percent, according to the Department of Agriculture. Sri Lanka’s main cash crop, tea, is also likely to get hit with rising temperatures reducing leaf quality.

Riza Yehiya, a climate risk management specialist, warned that policy makers are still not taking shifting climate patterns and their impact seriously. “Current spell of extreme heat experienced in Sri Lanka is considered a passing cloud. It is not discernible to those in power and decision making in their air-conditioned chambers,” he told IPS.

He said that discussions were taking place at policy level but what was lacking was adaptation and implementation on the ground level. “In a practical sense, making society climate change resilient requires putting the society almost on a war footing to prepare them to proactively respond.”

Water management is one area where experts say the country’s policy makers need to show urgent attention.  Irrigated water for farming is provided free in Sri Lanka but officials at the Department of Agriculture complain that it is almost impossible to get farmers to use water sparingly or to shift to more climate resistant crop varieties.

Yehiya said that people’s behaviour from watering plants to washing their cars or how they used electricity needs an overhaul.

“What is required to forestall this threat is to change the behaviour of people, their societies and economies to reduce their carbon footprint, and enable them to live sustainably without affecting the natural eco-system.”

No such seismic shift is in sight. The country is still facing each new climate threat in isolation, without linking the dots.