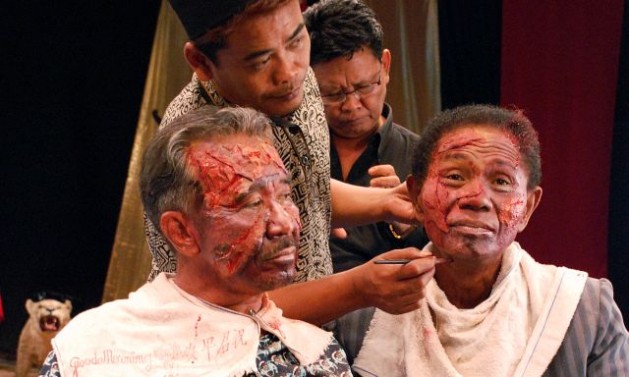 Fellow executioners Anwar Congo (left) and Adi Zulkadry have their makeup done before reenacting a scene from the Indonesian genocide. Credit: Courtesy of Joshua Oppenheimer

WASHINGTON, Mar 1 2014 (IPS) - Watching former gangsters and paramilitary leaders proudly reenact scenes from Indonesia’s military-led mass killings of 1965-66 in the Oscar-nominated documentary, “The Act of Killing”, it’s easy to forget the role of outside countries.

“It was like I had wandered into Germany 40 years after the Holocaust only to find the Nazis were still in power,” director Joshua Oppenheimer told IPS in an exclusive interview.

"Everyone I interviewed was boastful about even the most horrible details of the killings, which they described with smiles on their faces." -- Joshua Oppenheimer

But while U.S. covert support for the deadly crackdown that killed at least half a million people is not the focus of his film, Oppenheimer hopes the powerful country will at least admit its role.

“There was lots of foreign support for the genocide and that is used as an excuse not to apologise,” he said during a recent visit to Washington.

“It’s my hope that the U.S. will also take responsibility for its part so the Indonesian government can come to terms with the past and we can move on to reconciliation and healing,” he added.

While the U.S. has not formally admitted to that part, declassified documents show the CIA directly assisted the Indonesian army in its quest to eliminate the Communist Party of Indonesia (PKI) — killing anyone accused of links in the process — after a failed coup attempt.

“The simplest way to put it is that in the month leading up to the events of Sep. 30, 1965 the U.S. sought through covert operations to provoke an armed clash between the Indonesian army and the communist movement in the hope that it would eliminate the PKI,” said Bradley Simpson, who heads a project at the National Security Archive that declassified key U.S. government documents concerning Indonesia and East Timor during the reign of General Suharto (1966-1998).

“Perhaps most important is the fact that the [Lyndon] Johnson administration sent clear signals that they enthusiastically supported an attempt to destroy the communists from the bottom up knowing full well that this would lead to mass violence,” he told IPS. 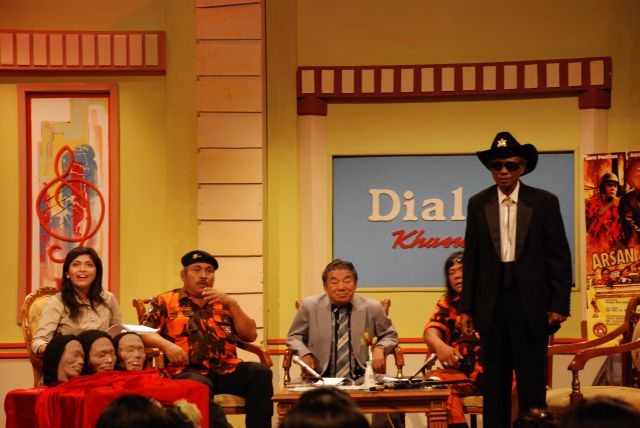 Anwar Congo, the founder of a right-wing paramilitary organisation that grew out of the Indonesian genocide’s death squads, proudly discusses the making of “The Act of Killing” on a local talk show. Credit: Credit: Courtesy of Joshua Oppenheimer

That violence may take centre-stage on Sunday, Mar. 2 when the winner for “Best Documentary Feature” is announced during the 86th annual Academy Awards.

But while Oppenheimer may have produced one of the most unique documentaries of all time, he had initially set out to film a different story in Indonesia.

While documenting a community of exploited plantation workers in 2001, Oppenheimer, then in his late twenties, witnessed how they were bullied by the “Pancasila Youth,” a gangster-led paramilitary organisation that used death squads and continues to repress the population to this day.

After victims of the genocide were intimidated into not talking to him by order of the military — the leaders of which proudly display their brute hold on the population and corruption on camera — some survivors urged Oppenheimer to interview the perpetrators instead.

“I was afraid at first, but after I got over that fear I realised that everyone I interviewed was boastful about even the most horrible details of the killings, which they described with smiles on their faces,” he said.

In the eight years that it took Oppenheimer to complete “The Act of Killing”, which was executive produced by internationally known directors Werner Herzog and Errol Morris, he only discovered his main character, Anwar Congo — the founder of a right-wing paramilitary organisation that grew out of the death squads — in the final year of filming.

Congo, who describes torturing and murdering suspected communists “like we were killing happily,” acts as though he is the director of the documentary as he collaborates with friends and colleagues to recreate scenes from his memory.

“I felt his pain was close to the surface, so I lingered on him,” said Oppenheimer.

But while Congo seems haunted by his past, especially by a recurring nightmare of a severed head with eyes he failed to close staring at him, he ultimately reverts to the excuse that he was just following orders. 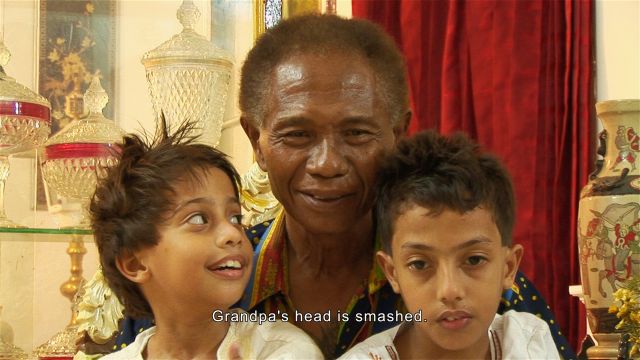 Anwar Congo watches “The Act of Killing” with his grandchildren. Credit: Credit: Courtesy of Joshua Oppenheimer

“I don’t think Congo saw this as his redemption,” said Oppenheimer. “He doesn’t recognise in a cognizant way that what he did was wrong.”

After Congo watched the film “he was very moved and emotional and then he pulled himself together and said, ‘this film shows what it’s like to be me,’” Oppenheimer told IPS.

“His conscience was guiding the process and it sounds very complex but for him it was simply about showing me how he killed,” he said.

Adi Zulkadry, a fellow executioner who warns Congo that the material in the film could be used against them, seems to have a deeper understanding of the magnitude of his actions but also justifies them as a consequence of war.

Pressed to respond to the fact that what he did is described by the Geneva Conventions as “war crimes,” Zulkadry says he doesn’t “necessarily agree with those international laws”.

“War crimes are defined by the winners….Americans killed the Indians. Has anyone punished them for that? Punish them!” he proclaims.

But while Zulkadry denies the value of Indonesia coming to terms with its past by admitting that what happened was a genocide, Oppenheimer’s film may be aiding the process — it has been screened thousands of times in Indonesia, and is available for free online.

“The Act of Killing” was also recently shown at the U.S. Library of Congress.

Senator Tom Udall of the foreign relations committee, who introduced the film to a group of senators, told US News and World Report that, “The United States government should be totally transparent on what it did and what it knew at the time, and they should be disclosing what happened here.”

But it remains to be seen whether Washington will change a policy of denial.

“Fifty years is long enough for both the U.S. and Indonesia not to call it a genocide,” said Oppenheimer.