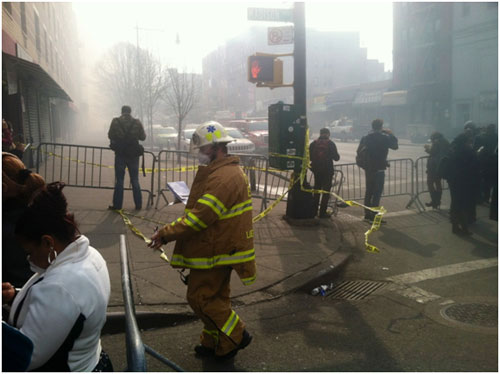 A gas leak is said to be the culprit as neighbours reportedly complained of an odour just minutes before the explosion.

Authorities responded quickly with some 250 or more fire fighters rushing to the scene to help pry people out of the rubble and hose down burning buildings caused by the five-alarm fire.

“My building has 16 families.” Kaucher Bhuiwan, a woman who lives in the neighbourhood told IPS. “I was sleeping and then I woke up when I heard it. I felt like my building was shaking.”

New York city Mayor Bill de Blasio, who had to cancel an appointment with Secretary-General Ban Ki-moon Wednesday morning, arrived to survey the damage calling the explosion, “a tragedy of the worst kind because there was no indication in time to save people.”

The two buildings that collapsed housed 15 apartments, a piano store called Absolute Piano and a Spanish Christian church. “I went outside and I saw the whole building on the ground.” Bhuiwan said.

Neighbours told IPS that a bus and various cars were seen on the road as explosion erupted. “I saw the fire fighters finding people. They were looking everywhere,” Bhuiwan continued.

Amidst heavy smoke and police barricades, distraught citizens pleaded with officers to allow them check on family members in nearby buildings that had been blocked off.

One woman who was dressed in a red sweater and visibly shaken vehemently assured police that she could not get a hold of her family and needed immediate access. An officer held her hand while dispatching a colleague to check on the building addressed.

Leaving many surprised, no one suspected an explosion like this could occur on a busy cross street like 116th and Park Avenue.

“It was so crazy, my heart rate just jumped.” Rasheeda Davis, a woman who lives on 117th street told IPS. “I looked outside and everyone was just running.”

“There are a lot of new buildings around here. I’ve never feared an explosion or a gas leak or anything like that.” Davis shared with IPS. While investigations are underway, reports confirm the deaths of three people and over 60 injured.