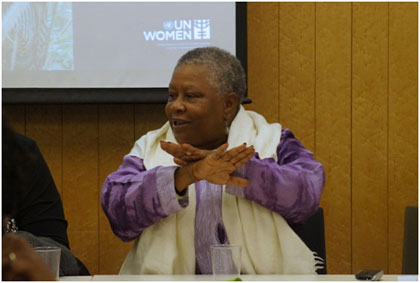 UNITED NATIONS, Mar 21 2014 (IPS) - The topic of natural resource management posed a critical question during the current 58th session of the Commission on the Status of Women (CSW): how can women utilize their knowledge for managing natural resources to promote peace and develop themselves?

The answer lays in the experiences of local Liberian women who actively encouraged their fellow citizens to educate themselves about land ownership and management – especially because women own less than one percent of the land in Liberia.

In a partnership with United Nations Peacebuilding Support Office (PBSO) and United Nations Entity for Gender Equality and the Empowerment of Women (UN Women), civil society, governments and non-profit organizations met to discuss the mobilization of women and natural resources in a CSW side event titled ‘Turning Money into Honey: Women’s Role in the Management of Natural Resources and Extractive Industries in Liberia for Durable Peace.’

“We are the drivers of our country.” said Edtweda “Sugars” Cooper, a leader of the Liberian women’s movement who spoke during an informal meeting at the Swedish mission Wednesday afternoon.
Land in particular, is one of the most important aspects of a woman’s livelihood in Liberia and has recently been a topic of controversy as corporate companies seek economic gains within the country.

The situation came to a head when Kamara and other local women took matters into their own hands and rallied against the logging company, creating a roadblock and driving them out of the town.

The women feared the destruction of their roads would prevent them from transporting goods to the market – an essential part of both their economic and social development.

This form of retaliation served as a reminder to governments and big corporations that women in Liberia view the land not only as a means to create a life, but also as an empowerment tool.

“You can’t take away our livelihood.” Cooper said, commenting on the importance of allowing women to stand up to corporations and authorities that dismiss their eligibility to manage natural resources.

“Women are skilled, we’re are managers. In Liberia, in a farming community, the woman will clear the land; she plants, she harvests, she processes, she markets the produce from the land.”
UN Women together with their counterparts in Liberia call for the recognition of women as integral land developers, managers and business owners.

Using Liberia as a success story, three major points are defined: education of women in such a way that promotes skill, literacy and empowerment, enforcement of gender sensitivity from the local level to the parliamentary level and economic investment for locally owned businesses.

After a 14-year civil war that left the country destabilized, Cooper believes no one should underestimate the strength of women in Liberia. “We bring skills to the table and those skills will help with the development of our country.” she said.

Liberia is home to over three million people and according to UN Women—about half of them are women.