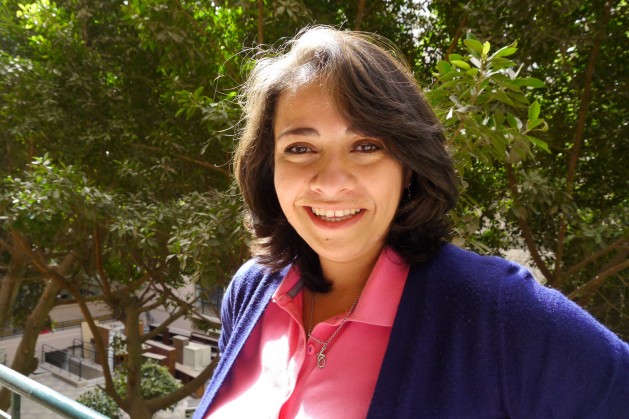 IT entrepreneur Marwa Sadek, the face of a new Egypt. Credit: Rachel Williamson/IPS.

CAIRO, Mar 7 2014 (IPS) - The group of buildings near Tahrir Square could be modern campus-style office space anywhere. It’s hard to believe that just outside the heavy steel gates lies downtown Cairo, the noisy, polluted and now troubled heart of Egypt.

The buildings are now a new IT hub called the GrEEK, after its history as a Greek school and its current incarnation as a technology hub, and are the intended nucleus of a rising Egyptian ‘Silicon Alley’.

The possibility of disruption from Tahrir Square to business as usual at the tech hub is a continuing reminder here that Egypt is not out of the political woods yet.

The location was the chief attraction for venture capitalist Ahmed Alfi when he decided in 2012 to build an ‘ecosystem’ for tech entrepreneurs.

The campus is close to the junction of the main metro lines and just a few stops from the national train station. Alfi said residents of Greater Cairo and from many of the surrounding cities could be at the business park within an hour and a half.

Alfi has ten tenants already in the office space he lets out, and “four or five” negotiating space, he told IPS.

Rent for a 50-square-metre office can vary from 450 dollars per month to 1,500 dollars on the lower floors. To put that in context, the new minimum wage for public sector workers is 172 dollars a month.

Alfi is clear about his aims for the campus: to give Egypt’s engineers and scientists a place to build technology businesses and thereby boost the sputtering economy. “My interest is its impact on the culture of entrepreneurs and on the Egyptian economy,” said Alfi.

Those “kids” are the much talked of entrepreneurs in Egypt’s tech revolution who are reimagining their country as they want it to be. They are educated, usually bilingual, and tapped into regional entrepreneurial and business networks.

Marwa Sadek, founder of the digital marketing agency 20 Uses, mentored start-ups in Alfi’s Flat6Labs business incubator for the last two years, and couldn’t wait to get involved when she heard about the venture.

“I wanted to be in a place that is a business hub,” she said, having moved into a fashionably spartan second floor office in January. “When all the companies move in, the GrEEK campus is going to be a strong source of economic activity.”

Not only has the exposure to other businesses expanded 20 Uses’ client base, Sadek will soon have all the facilities on site needed to run a business, such as meeting rooms and cafes.

Yassar el-Zahhar chats happily about the plans for his health food start-up to service the geeks on the new campus. “You can smell the success here,” he told IPS. “Being here makes me take the power from the entrepreneurs around me.”

But all the excitement and business acumen inside the campus are unlikely to benefit those working just outside the gates. Continuing political agitation in Tahrir Square is one factor that raises questions just how much positive influence will flow out into the wider community.

Sadek’s main problem is the proximity to the square. She’s had to postpone meetings “three or four times” in the last two months because protests made the campus difficult or dangerous to reach.

Sadek said this would not discourage her from working from the GrEEK. But the possibility of disruption from Tahrir Square to business as usual at the tech hub is a continuing reminder here that Egypt is not out of the political woods yet.

GrEEK seems a world apart from Tahrir Square. The downtown area is “full of nasty people,” said el-Zahhar. “You can’t walk in peace in downtown.”

That means business for his food outlet at the GrEEK haven. “This will be protecting you. Protecting the girls, protecting the nice guys… I don’t think downtown will make any use of us, we are here to make money not spend money.”

Across the road from the GrEEK, Reda Feuad sipped tea in his IT shop as he waited for customers. Feuad doesn’t see the upstarts next door replacing his long-standing relationships with clients around the country.

The generational and educational difference between Feuad and the GrEEK tenants was clear: where Feuad spoke Arabic only and connected with his Egyptian clients via phone and sometimes in person, his new neighbours have regional and international ambitions, speak two or more languages and are constantly available by phone, and email, Facebook and Twitter.

No signs of this are evident yet, but some expect the influx of smart, innovative problem solvers to have some impact on the downtown area.

“I think the downtown culture will be affected because it will want to, I mean smart entrepreneurs will definitely come in and want to tailor to that new segment of clientele that is suddenly available to them,” she said.

GrEEK CEO Tarek Taha is keen to be a good neighbour and has commissioned local carpenters and furniture makers to renovate heritage-listed buildings.

“We clearly understand where we’re located and we want to have an impact within the environment around us… I know this is a really small incremental effect but it’s very important to us.”