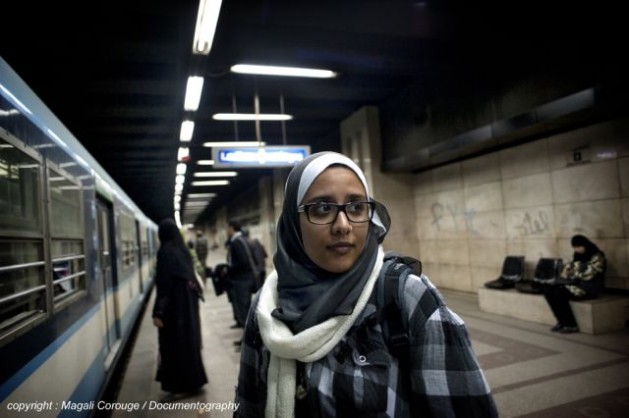 CAIRO, Nov 14 2013 (IPS) - Nihal Saad Zaghloul is an Egyptian woman in her late twenties. Like other young women, she faces the daily risk of sexual harassment on the streets of Cairo. But Egypt’s revolution made her realise that people can unite and that she can make a difference.

A trend of mob rapes has risen rapidly in Egypt as political stability and social security have diminished post-revolution. Together with a friend she founded an organisation called Basma to raise awareness about sexual harassment in the streets of this metropolis of 30 million.

After gathering dozens of volunteers, they deployed on the streets around Tahrir Square and inside the downtown metro stations last year for the first time. Zaghloul deeply believes that everything starts with education – and she set out to educate.

“Our educational system is failing. Government schools perform poorly and private schools are too expensive. This keeps most of the Egyptian youth uneducated. And it is exactly this group that we find in the streets, bored with life, mistreating women.” Zaghloul argues.

Women in Egypt are often harassed by men and both sexes tend to take it as something normal. According to an April survey by U.N. Women, 99.3 percent of Egyptian women respondents said they had been sexually harassed.

But with Basma, Zaghloul started to fight this. Whenever they see a girl being harassed, she and her team of volunteers approach the young men or boys to sensitise them.

The first months were a struggle for the organisation. The police, themselves often active participants in the harassment, did not take the initiative seriously and caused more problems, rather than offering support.

But Zaghloul has noticed a shift over the past few months. For the first time, the police are supporting the initiative and actively participating in prevention.

Another key phenomenon is the rise of female officers patrolling the metro. Colonel Manal and her nine other women colleagues are especially eager to promote safety in the stations.

Harassment is a daily problem, but with El Eid, one of the biggest Muslim festivities, celebrated this week, private initiatives as well as government-related initiatives are on full run. Downtown Cairo has always been a place where sexual harassment reached the highest levels. And remembering the high numbers of sexual assaults during the same period last year, many women are afraid to walk down the streets of their own city.

There was only a lull in harassment during the first few days of Egypt’s 2011 revolution, when Tahrir Square was packed with families and the atmosphere was jovial.

But by the end of the eighteen days until the fall of Hosni Mubarak (1981-2011), sexual harassment had once again reached a peak. The problem isn’t directly related to any specific political or religious current, but rather has become a characteristic of Egyptian culture over the last few decades.

Manal has patrolled Egypt’s metro for the past two weeks to raise awareness about sexual harassment and assault against women. Heavily influenced by the Basma initiative, she says the police now have more authority and can arrest the perpetrators. In contrast to the early days of Basma, the police now cooperate readily. This week, Zaghloul and Manal will be working side-by-side.

Since the 1990s, women have been able to travel through the city by metro in one of the wagons reserved for female passengers.

But this rule is often violated. Men take their chances right before the metro doors close to jump into the women-only wagons. Occasionally they board by accident, but most enter on purpose knowing that the wagons are full of women, seeing it as an opportunity to ogle them.

“If a man gets into the wagon, right before the doors close, what can we do? Sometimes women get angry, but mostly they are afraid and look the other way while he harasses one of their fellow passengers,” says Zaghloul. “But when one of them speaks up, usually all of the women will follow. That is why we started this initiative, to make everybody speak up.”

Only a year ago, an Egyptian girl called Samira, for the first time in recent history in Egypt, filed a charge against one of the perpetrators after she was attacked by several men during a protest against military rule. She won the case.

“These stories are still rare. Women are still seen as the instigator rather then the victim of these actions. Therefore, they prefer to keep what happened to them secret,” says Zaghloul.

“Moreover, if a girl approaches the police, she often gets harassed by the officers themselves. So having female police in charge of this problem is an absolute must.”

Over the last few decades, female police officers weren’t to be found on the streets of Cairo. This was one of the jobs reserved for men only.

For months, Zaghloul and a few dozen Basma volunteers would patrol the packed metro and the crowded streets of Cairo. Today, Colonel Manal is giving them full assistance.

The former moral police officer regards journalists with suspicion – foreign journalists in particular. The interim regime that has ruled the country since President Mohammed Morsi was ousted in July has launched an anti-media campaign. By depicting all reporters as spies and collaborators with the Muslim Brotherhood, they have made Egyptians suspicious of the media. But a reference to Basma breaks the ice.

“Fifty years ago there were as many female as male police officers. We have to return to that equilibrium,” Manal says. “Only this way can Egyptian women feel safe on the streets of Cairo.”

Since the laws are not clear it is still hard to fight sexual harassment, but Manal nevertheless urges all victims of sexual assault to file charges.

Not all women believe progress has been made. Hend Elbalouty, 25, witnessed her sister become the victim of a sex mob in Tahrir Square earlier this year. The charges that she filed against the perpetrators were never dealt with properly.

“We are back at square one,” Elbalouty says wearily. “A police state that is dysfunctional. The fact that women have more power now won’t change the lawlessness that dominates Egypt’s legal system.”

Mohamed Khamees, a passenger in the male wagon, is not in favour of this initiative. “Fighting criminals isn’t a job for women. Even for their male colleagues these situations are often uncontrollable, so how can women deal with them?”

Traditional norms and values and a division of tasks for men and women are still deeply rooted in Egyptian society.

But Zaghloul remains optimistic. “The police are finally taking responsibility. It will take a while before men will accept the authority of women, but it is most definitely a step in the right direction.”