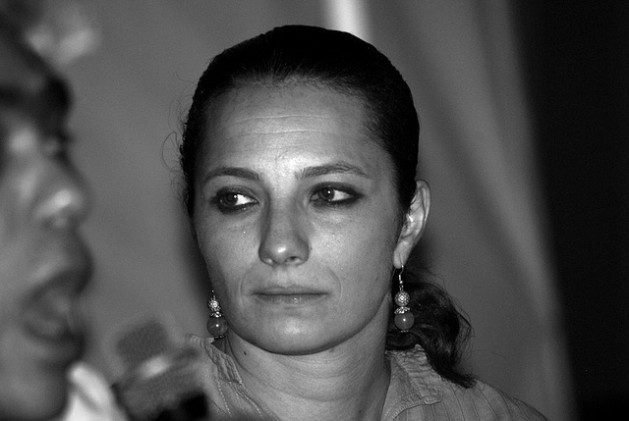 WASHINGTON, Jul 3 2013 (IPS) - A prominent human rights organisation based here announced Tuesday that its annual award for 2013 would go to Ragia Omran, an Egyptian lawyer and women’s rights activist.

“With dedication and courage, Ms. Omran is often the first to arrive on the scene at jails, police stations, court houses, and military and civilian prosecution offices,” said Kerry Kennedy, president of the Robert F. Kennedy Center for Justice and Human Rights, which has presented the award to outstanding defenders and advocates of human rights for 30 years.

“She is doing critical work in a country and a region that is going through a very difficult and important time." -- RFK's Santiago Canton

“Hundreds of peaceful activists have her to thank for successfully securing their release and protecting their rights to freedom of speech and association. [Omran] is a beacon of hope for the women of Egypt and a champion in the global human rights movement.”

The award, according to the centre, is designated for “journalists, authors, and human rights activists who, often at great personal risk and sacrifice, are on the frontlines of the international movement for human rights and social justice.”

Picked by the RFK Center from a list of over 100 nominees, Omran has spent two decades fighting for women’s rights, as well as human rights in general, in Egypt. In 1994, she started and led a successful campaign to stop the practice of female genital mutilation in public hospitals.

Most recently, she played a part in the popular uprisings in Egypt, founding an influential campaign to further human rights there. Her Almasry Alhurr Movement seeks to promote long-term good governance, transparency and public participation.

Other groups that promote human rights have also acknowledged the merit of Omran’s work, especially noting her recent accomplishments.

As an attorney, Omran has represented hundreds of protestors facing military tribunals, defending their rights to demonstrate publicly against government repression. She is also a part of the Front to Defend Egypt Protesters, a legal network designed to protect activists, and the New Woman Foundation, which advocates reproductive rights and the inclusion of women in politics.

In addition, she’s a member of the Hisham Mubarak Law Center, which represents torture victims and others who have suffered mistreatment at the hands of the government, and the No to Military Trials for Civilians Campaign, an effort to halt the subjection of civilians to military trials.

The RFK Center stated in its announcement that “[t]he work of human rights activists remains critical during this time of political unrest [in Egypt].”

In an interview with IPS, Santiago Canton, director of the centre’s human rights programme, reiterated the importance of geography in selecting Omran for the award.

“She is doing critical work in a country and a region that is going through a very difficult and important time,” he noted.

Egypt is currently in a state of great social and political unrest, with its military having given President Mohammad Morsi an ultimatum, which ends Wednesday, to gain control of a political situation that has never stabilised following last year’s elections.

What the military will do if the president fails to meet this demand remains unclear, but the ultimatum underscores the lack of democratic stability and degree of military control that still exists in Egypt.

Women’s rights have been a central component of Egypt’s secular, democratic movement. The sexual abuse of women protesting in Egypt has also drawn attention to the issue of gender within the pro-democracy movement there.

The RFK Center has a well-established reputation for maintaining material and political support for its awardees for many years after the honour is received. Omran will receive an undisclosed amount of money as part of the award, but Canton points out that she will benefit from it in other ways.

For instance, the centre will commit to assisting Omran in achieving her goals by advocating on her behalf and providing her with needed resources. In addition, the attention the award draws, Canton believes, will act as a shield against threats from the sources of power that are challenged by her work.

“The award provides recognition that will in turn provide added protection for her as she continues to do this outstanding work at her own risk,” Canton told IPS, citing examples from the history of the award where this has proven to be the case.

He notes, for instance, stories of past awardees, such as Zbigniew Bujak and Adam Michnik, leaders of a Polish underground movement being persecuted by secret police, and Amilcar Mendez Urizar, a Guatemalan activist whose work earned him death threats from powerful people.

The award will be presented to Omran by the widow of former U.S. Senator Robert F. Kennedy, for whom the award is named, during a ceremony here in November.