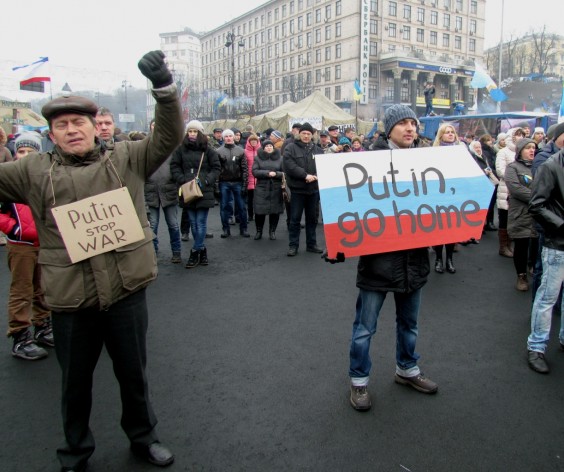 Protests against the Russian invasion of Crimea at the Maidan in Kiev. Credit: Justin Hyatt/IPS.

KIEV, Mar 15 2014 (IPS) - Amidst rising tensions within Ukraine, between its government and Russia, and even more between Russia and the West, many are now beginning to fear the beginning of a new Cold War. Talk of sanctions is finding new supporters, and there are proposals to freeze plans for a G8 summit scheduled in Russia later this year.

At the end of February pro-Russian gunmen seized key buildings in the Crimean capital Simferopol, and on Mar. 6 the Crimean parliament asked to join Russia. It set a referendum on this question for Mar. 16.

Crimea is a southern region of Ukraine with a large Russian-speaking population, and significantly under Russian cultural and political influence. Russian or pro-Russian forces are now said to control most of Ukraine’s southern peninsula.

“We are one nation. Not divided, just diverse."

Russian President Vladimir Putin declared the need for a presence in the Crimea in order to protect the Russian-speaking population there. On the other hand Ukrainian Prime Minister Arseniy Yatsenyuk has pledged that Ukraine will not give a “single centimetre” of land to Russia.

Tensions have escalated on the peninsula. While only warning shots have been fired so far, pro-Ukrainian protestors as well as journalists have been physically and verbally assaulted. Election observers from the Organisation for Security and Co-operation in Europe (OSCE) who attempted to enter Crimea in the last few days were chased away.

Questions of language and identity have assumed enormous proportions as Ukraine plunges deeper into turmoil.

“Language and religion were not dividing factors for Ukrainians until politicians started artificially creating such confrontations,” Liliya Levandovska, researcher at the Central European University in Budapest in Hungary told IPS.

The party of former Ukraine president Viktor Yanukovych, who fled to Russia following lethal clashes in Kiev, would make references to the suffering of the Russian-speaking population, said Levandovska. “But these were myths, and now Putin is broadcasting these myths to the world.”

Many eastern Ukrainians are scared they will be obliged to use only Ukrainian language, Tamara Zlobina, an analyst earlier with the Institute for Strategic Studies in Kiev told IPS. “They are fed disinformation by Putin’s propaganda.”

Many easterners, she said, are frustrated by poverty and helplessness, but may end up venting their anger towards pro-Ukrainian activists, instead of the regime.

But Zlobina sees the tide turning. She believes that false media propaganda is backfiring and that it has only “provoked a lot of eastern Ukrainians to join the Euromaidan movement and fight for their right to have dignity and a decent future.” The Euromaidan movement is named after Ukrainian protests in Kiev demanding better rights and greater integration with the EU.

Levandovska says people who came from the eastern and southern regions of Ukraine to visit the Maidan returned with a decidedly different picture from what they had gleaned from the media.

The Crimean Tatars are an ethnic Turkic group who were deported by Soviet dictator Joseph Stalin to central Asia in 1944. They currently make up 12 percent of the Crimean population.

Highly vociferous in their non-alignment with Moscow, they recently staged a public protest in Simferopol in support of a united Ukraine, outnumbering a pro-Russian protest held at the same time. “Vladimir Putin realised then that a media assault was not enough, that separation would have to come by force,” Levandovska told IPS.

Activists reported that pro-Russian powers shut down all Ukrainian TV channels in Sevastopol, such as ICTV, Novyi and TRK Ukraina.

Billboards in Crimea are depicting a choice between a “Nazi” Ukraine, or joining the Russian federation. The Tatars plan to boycott the referendum.

On Mar. 8, on International Women’s Day, a special gathering took place on the Maidan in Kiev. Banners held by women bore slogans such as “Equality, Solidarity, Sisterhood” and “Women of Maidan to Women of Crimea.” Natalia Sherimbetova, a language instructor from Kiev, said that women from Crimea would not get to hear about the event because Ukrainian TV channels are no longer accessible there.

In another show of solidarity with the Russian-speaking population of western and southern Ukraine, a language-swap day was organised in Lviv, Donetsk and Kiev where Ukrainian speakers spoke Russian for a day and vice-versa. “It was powerful. Even in the most Western of Ukrainian cities, Lviv, many people made a point to speak Russian,” Sherimbetova told IPS.

It’s difficult to gauge just how many people participated in the language swap, but Sherimbetova insists that the essence is in the symbolic gesture of this action, and that Ukrainians, especially in the West, were trying to send a message to their Russian-speaking brethren.

“We are one nation. Not divided, just diverse,” said Levandovska. “It is just a matter of time, until the people in the east will stop believing false propaganda. We all want long-term peace and prosperity for Ukraine.”