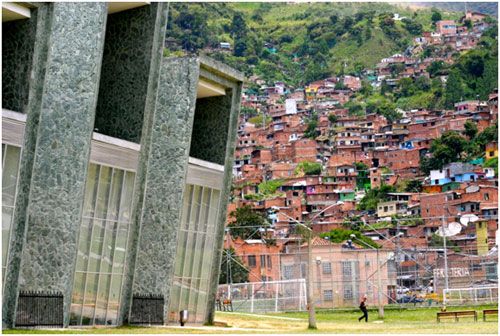 A new school built amongst the steep hills of the Community 13 neighbourhood of Medellin, Colombia. Credit: Joan Erakit/IPS

MEDELLIN, COLOMBIA, Apr 8 2014 (IPS) - Amidst the backdrop of plush green forestry and winding roads that curved around each hilltop, participants from all over the world gathered in the city of Medellin, Colombia Monday for the seventh session of the World Urban Forum (WUF7).

There, ready to greet them and detail the accomplishments of their own city were hundreds of local Colombians each staged from the airport to the plaza Mayor Convention and Exhibition Centre, the official venue for the forum.

A reported 15,000 people from over 164 countries lined registration desks to pick up identification cards and be processed through security, visibly excited to be in the Colombian city.
Hosting the WUF7 in Medellin goes far beyond pleasurable scenery and great weather.

“I think it’s very important for the people of Medellin, because it’s recognizing they are doing well. That they have made a lot of improvements in the city.” Maria Isabel Rasmussen, a Colombia native and lecturer attending the forum, told IPS.

The city of Medellin has under gone vital changes both socially and economically. Once ridden with violence and widely known as a hub for narcotics, Medellin now boasts itself as ‘transformed’ and ‘innovative’ with a transportation system called the Metro de Medellin that connects thousands of people a day from communities that were once isolated from the downtown area.

With a theme focused on urban equity in development, the attendees gathered at WUF7 eager to address the realities of urban environments—poverty, infrastructure, insecurity, mobility and sustainability.

“There can be no sustainable development if urbanization is not sustainable, “ said Joan Clos, Executive Director of UN-Habitat, at a press conference Sunday.

The urban revitalization of Medellin is being presented as an example because of its recovery of public space and efforts to include citizens from vulnerable communities in the implementation of development.

“Medellin has become a kind of laboratory. They have put to test some dreams and they have tried to put into practice and do things,’ Rasmussen said, adding “not just thinking or analysing, but more going into the ‘how.’”

With a population of over three million people, the aggressive urban renewal of the Medellin has garnered a lot worldwide attention but city revitalization aside, it is visibly apparent that poverty still remains a black cloud over the Colombian people.

“It’s a learning process,” Rasmussen said alluding to the challenges that the city faces.

“The municipalities need to take the responsibility of delivering this huge structure that the city needs; transport, libraries and so on, because the people are not able to do that.” Rasmussen concluded.

As man cannot live by bread alone, so a city cannot thrive on physical renewal alone.

WUF7 will continue until April 11th and the information gathered at the forum will be considered as tools for the preparations of the U.N.’s post 2014 development agenda.