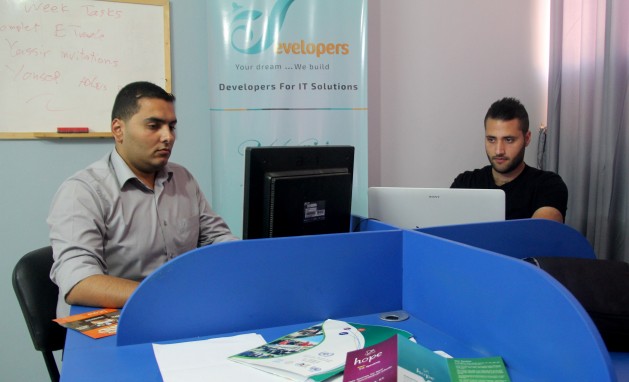 Khalid Salim (left) and Yassir Younis (right) , owners of the Motawiron mobile applications and software development company that grew out of the Technology Incubator in Gaza. Credit: Khaled Alashqar/IPS

GAZA CITY, Jun 19 2014 (IPS) - “After graduating, I joined the thousands of other graduates on the list of the unemployed. Then I read about a project that offers a technology incubator for youth projects, applied, was accepted and now I’m no longer on that list!

Yasser Younis, who is now co-owner of a mobile applications and software development company, was describing his experience of the Palestine Information and Communications Technology Incubator, a unique programme set up and run by the University College of Applied Sciences (UCAS) in Gaza, with the support of Oxfam, which has the ambitious aim of bypassing the blockade imposed on Gaza.

The idea behind the programme is to provide graduate students with the necessary sponsorship and financial support to develop their projects during a gestation period of six months, with project staff on hand to help them network with companies abroad and market their products online.

“Ideas are accepted on the basis of specific criteria and the ability of the idea to overcome the blockade on Gaza and market products abroad via the Internet” – Professor Saeed Azzibda, Manager of Development Programmes at UCAS, Gaza

Describing this promising programme, Professor Saeed Azzibda, Manager of Development Programmes at UCAS, told IPS: “Ideas are accepted on the basis of specific criteria and the ability of the idea to overcome the blockade on Gaza and market products abroad via the Internet. If such essential criteria are met, we would embrace the idea and develop it until it becomes a product with foreign trade potential.”

The Technology Incubator qualifies five companies in each assessment session and some of its start-up projects have already developed their own programs and applications that are being sold in the global market of mobile phone software.

The programme has been very well received in the Palestinian community and at international level, with some Arab investors offering successful participants the opportunity to travel and work in Qatar and other Arab countries interested in the field of technology and online markets, or to open headquarters for budding start-ups outside Gaza and increase investment in them.

“We have two dimensions to corporate incubation,” Professor Azzibda told IPS.  “The first is that the company sells its products via the Internet to overcome the blockade of Gaza, and the second dimension is for those students who have created their own companies here to explore opportunities outside the borders of Gaza border and develop strong companies and investments abroad with the aim of also supporting their people in Gaza.”

Two of the graduates from the OCAS programme are Yasser and Khalil Salim, owners of the Motawiron mobile applications and software development company. They graduated from the UCAS programme after six months of incubation and the company is now selling its products online for companies in Saudi Arabia, the United Arab Emirates and some other countries.

Motawiron recently won a ticket to represent Palestine inthe “Imagine Cup”, the global student technology competition organised by Microsoft Corporation for the best software and applications to serve the world. This was the first time ever that Palestine had been represented in the competition.

Nevertheless, the blockade on Gaza prevented Younis and Salim from travelling earlier this month to Qatar for the Pan-Arab semi-finals of the “Imagine Cup”, although they possessed the necessary papers and the official invitation and tickets.

“Our company has developed the ‘HOPE’ application for mobile phones which helps the deaf communicate with people and integrate into society. We got the first position for Palestine and now compete in the world but we could not travel.  We have shared this application in competitions in order to expand horizons and start relationships with international companies,” Yassir told IPS.

Graduates make up a significant segment of Palestinian society where over 40,000 studentsgraduate each year, creating an urgent need to find creative ways to accommodate young graduates and their talents in the labour market. But the market in Gaza suffers from major weakness and serious decline at various levels because of the continued siege and closures imposed by Israel.

Some international donor organisations, including Oxfam, work in Gaza and try to support domestic markets and the local economy.

They manage large development projects through which they provide significant support to UCAS graduates to deliver their products to the outside world via the internet despite the challenges they face in Gaza, particularly the electricity blackouts for 12 hours a day and the difficulty of bringing in supporting equipment for emerging companies.

“Information technology is among the emerging and promising sectors in Gaza, where products that are blocked from access tomarkets by traditional ways due to the blockade can be offered via the Internet,” Alun Macdonald, Media and Communication Coordinator at Oxfam, told IPS.

“A company producing animated advertising has so far won six contracts outside Gaza with companies in the Gulf states, Canada and Saudi Arabia. Some of the companies have also proved themselves in the local market,” he added.

Meanwhile, young female journalist Nour Al-harazin is taking the media approach in her initiative to overcome physical and political barriers and reach the outside world, by preparing to launch and operate an English-speaking news channel from Gaza via YouTube.

“It would be the first in the Arab world and Palestine.This channel intends to provide reports and human stories from besieged Gaza to the outside world. It will be, for the first time, our right as Palestinians to convey our suffering ourselves to the outside world without any parameters. This is the main idea of the project,” Nour told IPS.

A support network of activists from Western countries is taking shape across social networking sites to help this Palestinian journalist with her project. Having launched an online page for fundraising, Nour has also released a short video on YouTube calling on activists and supporters of justice in the world to provide assistance and financial help for her project so that she can deliver the message of the Palestinians and the people of Gaza in particular.

“The siege and travel ban have always been an obstacle to Palestinians, so I thought of using the Internet and social media to reach out to the world that cannot reach us. The Internet has now become a means to break this siege,” said Nour.

Day after day, Gazans like Nour, Yassir and Khalil continue the struggle to find new ways to break the siege imposed on them and create access to the outside world through commercial relations and media outlets. The global Internet and social media have opened new doors and are now being used as an essential space to challenge closure and isolation.