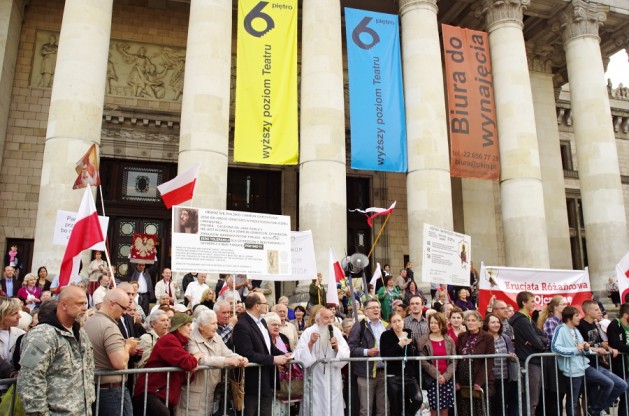 WAESAW, Jul 8 2014 (IPS) - A mix of conservative Catholicism and nationalism has become the predominant view in Polish public debate, with some worrying effects.

These were the values around which the opposition to communism led by trade union Solidarity built itself up in the 1980s but, after the fall of communism, opinion makers in the media and politicians continued to depict them as part and parcel of being Polish.

Observers note that the Polish Catholic Church has also grown increasingly conservative since 1989, in apparent contrast to an opening up of the Church worldwide.

Conservative Catholicism and nationalism were the values around which the opposition to communism led by trade union Solidarity built itself up in the 1980s but, after the fall of communism, opinion makers in the media and politicians continued to depict them as part and parcel of being Polish.

Last month, the director of a theatre festival in the city of Poznan decided to cancel showings of a play fearing he could not ensure the safety of viewers in the face of threats by conservative and far-right groups. The play – “Golgota Picnic” by Argentinian director Rodrigo Garcia – describes the life of Jesus using striking depictions of contemporary society, including some with a sexual meaning.

Among those asking for play to be cancelled were representatives of Poland’s main opposition party, Law and Justice, the main trade union Solidarity, and the far-right Ruch Narodowy (National Movement), all of which stand for traditional Catholic values. The Church also voiced its opposition to the play.

In itself, protesting against the play was unremarkable (it has also been met with opposition from Catholics in other countries, for example in France), but the Polish response was interesting: even if the festival was largely financed from public sources, the show was cancelled and there was hardly any resistance from public authorities to the decision. The public, however, made itself heard and readings of the play were organised in major Polish cities, with hundreds attending.

Meanwhile, the dynamics surrounding “Golgota Picnic” are being replicated over other issues in Polish society, among which the most striking is women’s reproductive rights. Poland is one of only three countries in the European Union where abortion is prohibited, unless the pregnancy is a result of rape or incest, there is a serious threat to the mother’s health or foetal malformation has been detected.

Abortion had been legal in communist Poland but was outlawed in 1993 after pressure from the Catholic Church. Ever since, attempts to make abortion legal have failed. In 2011, the Polish parliament came close to further tightening the law on abortion by prohibiting it no matter the circumstances.

At the time, it was not only the political forces explicitly standing for Catholic values that endorsed a total ban, but also many members of the governing centre-right Civic Platform, which depicts itself as Poland’s main liberal political force.

De facto, even the current restrictive law is not being implemented. In a series of high profile cases over the years, Catholic doctors in public hospitals have refused to perform abortions even if girls were pregnant as a result of rape, had serious health conditions or malformation had been detected in foetuses.

In May, in an escalation of the situation, over 3,000 Polish doctors, nurses and medical students signed a “Declaration of Faith” in which they rejected abortion, birth control, in vitro fertilisation and euthanasia as contrary to the Catholic faith. Signatories included employees of public clinics and hospitals. One of them was the director of a Warsaw maternity hospital who said he would not allow such procedures to take place in his institution.

The “Declaration of Faith”, which has been endorsed by the Polish Catholic Church, is contrary to Polish law and Prime Minister Donald Tusk has spoken out against it.

State authorities have been carrying out check-ups at those institutions in which signatories of the Declaration work to establish whether the law is being respected, and one fine has been imposed on the Warsaw maternity hospital whose director prohibits legal abortions. Yet more determined measures are still pending.

“Lack of massive resistance [to the Declaration] is not a sign of approval on the part of the general public,” comments Agnieszka Graff, writer and feminist activist. “It is rather a question of resignation: for 20 years we have seen politicians court the Church while ignoring public opinion on matters that have to do with reproductive rights. The pattern of submission has emboldened the radical anti-choice groups.”

Political power in Poland is firmly in the hands of conservatives. Law and Justice, the party with the best chance of winning next year’s parliamentary elections, is staunchly pro-Catholic and nationalist, and has in the past allied in government with far-right politicians. The governing Civic Platform, the choice of many liberals in this country, is bitterly divided between social conservatives and liberals, meaning it cannot enforce the constitutional secularity of the Polish state.

As Graff explains, in this political context, those who oppose the Catholicism-nationalism nexus find it difficult to coalesce into a strong movement. And ultra-conservatives continue to advance.

Far-right elements breeds in this environment and, in an ethnically and racially homogeneous country, their main targets are feminists, the LGBTQ community and leftists (the same groups that the Church condemns). Their strength is most visible in Poland during the annual Independence March on November 11, when tens of thousands of far-right youth take to the streets of Warsaw and other cities wreaking havoc.

According to June polls, the third strongest political force in Poland is the New Right Congress, which has a neo-liberal far-right agenda. The party, whose leader Janusz Korwin-Mikke has declared that women have lower IQs than men and that they enjoy being raped, gathered 7.5 percent of the vote in the May elections for the European Parliament.

“There is no clear demarcation between the Polish extreme right, the populist right and the mainstream right,” notes political scientist Rafal Pankovski of anti-racist group Nigdy Wiecej (Never Again). “The notion of a cordon sanitaire against the far-right does not seem to have been accepted in Polish politics and the media.”

Over recent years, civic mobilisation by progressive forces has nevertheless grown, and political parties with a strong liberal, secular and anti-nationalist message have been forming, but they still lack consolidation. Faced with the constant accusation of being “communists”, leftist forces that might counterbalance the conservative, nationalist and far-right trend are slow to grow in Poland.