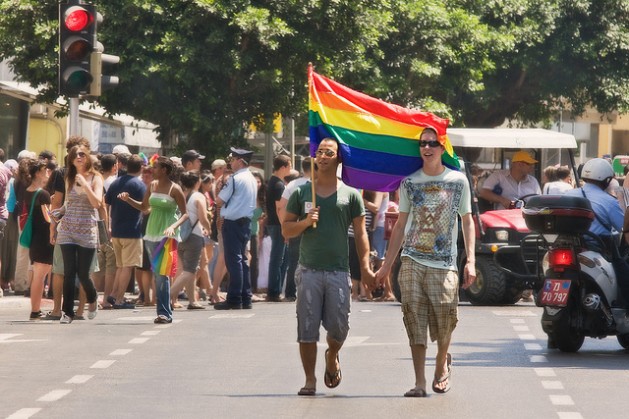 WASHINGTON, Jul 9 2014 (IPS) - Civil rights groups across the United States have withdrawn their support from a major legislative proposal that would outlaw workplace discrimination against sexual minorities, warning that recent legal developments could exempt companies on religious grounds.

Five major legal advocacy groups are arguing that the legislation, known as the Employment Non-Discrimination Act (ENDA), does not allow for total workplace protection. Rather, it “provides religiously affiliated organizations – including hospitals, nursing homes and universities – with a blank check to engage in workplace discrimination against LGBT people,” the groups note in a joint statement released Tuesday.

“[LGBT people] want to be judged in the same way any other employee is judged: Can we do the work? If we can, we should be free from discriminatory treatment that targets us because of who we are.” -- Kate Kendell

Previously, the groups, which include the American Civil Liberties Union (ACLU) and prominent gay rights organisations, had supported ENDA. But their turnaround comes a week after the U.S. Supreme Court handed down a contentious decision, known as Burwell v. Hobby Lobby, which allows private companies to withhold contraceptive coverage from their employees based on religious preferences.

“What we’ve seen in last week’s Supreme Court decision is a really concerted effort on the part of LGBT opponents to broadly endorse rights to discriminate,” Ian Thompson, a Washington representative of the ACLU, told IPS.

It is “unacceptable”, he noted, to “allow taxpayer-funded discrimination under the clause of religious exemption.”

It is significant to note that this religious exemption clause has always been included within ENDA. However, while the clause has long been a controversial component of the legislation, it is the provocative nature of the Supreme Court’s Hobby Lobby ruling that has encouraged legal advocacy groups to reject ENDA entirely.

Lucas Rivers, a prominent LGBT activist working in the U.S government, told IPS that “strong withdrawal [from ENDA] in the wake of the Hobby Lobby decision is the right move, as the Supreme Court’s decision has opened up doors to employment discrimination, whether it be women and their rights or gays and their rights.”

Yet other organisations have been voicing opposition to ENDA for much longer.

“We have been disturbed by the exemption in ENDA for years, and that concern has been very public,” Kate Kendell of the National Center for Lesbian Rights (NCLR), an advocacy group, told IPS.

Kendell also notes that “[the NCLR] has received unanimous expressions of support from [the LGBT community]. Our community is bright – they get that the provision in ENDA would provide those who oppose our equality a license to discriminate.”

Kendell is careful to note that her organisation’s dispute is not with the legitimacy of religious belief.

“Our nation respects and accommodates a wide variety of religious faiths, a quality we fully embrace. But it is not acceptable for some to use religion as a bludgeon to do harm to others,” she says.

“[LGBT people] want to be judged in the same way any other employee is judged: Can we do the work? If we can, we should be free from discriminatory treatment that targets us because of who we are.”

Kendall says she’s uncertain about the future of ENDA, but expresses confidence that a stronger bill can eventually be drawn up.

“We don’t know what we can get unless we fight for it,” she says. “If we combine forces and lobby for better language, I have no doubt we can get a better bill.”

Still, some prominent groups do remain committed to ENDA.

The Human Rights Campaign, the country’s largest LGBT rights group, stated on Wednesday that it will continue to support ENDA for a “very simple reason … it will guarantee millions of lesbian, gay, bisexual and transgender people in all 50 states explicit, reliable protections from discrimination in the workplace.”

In regards to the bill’s religious exemption clause, the group says it is urging its allies in Congress to recognise that LGBT people “do not have the luxury of waiting for these protections,” while an “urgent need” for equality persists.

Although the new bill would have no direct impact on workplace discrimination for LGBT individuals, the proposal’s sponsors see it as a significant step towards separating religious preferences from employees’ fundamental rights.

“Particularly in light of the recent Hobby Lobby decision, we must be more careful than ever to ensure that religious liberty, a cherished American value intended to shield individuals from government interference, is not wielded as a sword against employees who may not share their employers’ religious beliefs,” Jerrold Nadler, a member of the U.S. House of Representatives and one of the new bill’s co-sponsors, said Wednesday.

President Barack Obama is expected to issue an executive order on employment discrimination in coming weeks. As such, a similar fight is now brewing of that mandate’s details.

On Tuesday, a group of 100 progressive religious leaders urged the president to exclude any religious exemption from the order. Instead, the groups called on the president to remain committed to the principle of equality under the Constitution.

“If contractors were allowed to selectively follow employment or other laws according to their religious beliefs, we would quickly create an untenable morass of legal disputes,” the letter states.

Some civil rights groups have applauded the letter. The ACLU’s Thompson told IPS that the move was “incredibly important” in the context of the broader equality debate.

“It shows is that religious leaders and faith organisations do not speak with simply one voice on these issues,” he says. “Rather, it shows that there are two sides to the faith community, and it is very helpful for the community’s pro-equality voices to come forward.”