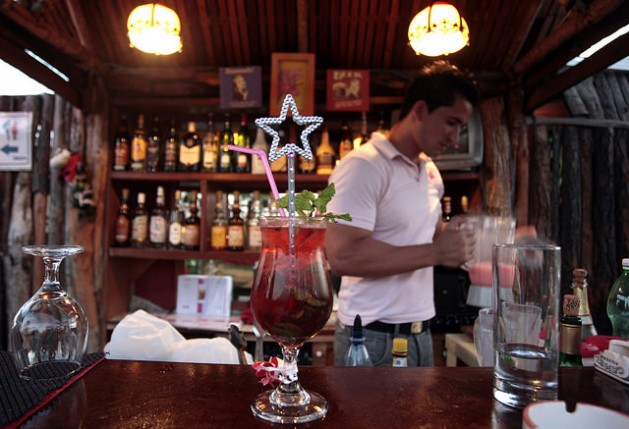 Drag Queen Mojito, one of the drinks on the menu at the La Vaca Rosada bar in Varadero, Cuba. Credit: Jorge Luis Baños/IPS

HAVANA, Jun 21 2014 (IPS) - Two men kiss each other while two women dance together without making other clients feel uncomfortable at the prívate club Humboldt 67, one of the venues seeking to cash in on an untapped market by fulfilling the unmet demand for bas, restaurants and other recreational spaces for the LGBTI community in the Cuban capital.

“Gay fiestas”, which until just a few years ago were illegal and generally ended in police raids, are now scheduled regularly at both state-run and prívate establishments that form part of the flourishing night life in this Caribbean island nation.

But activists warn of the danger that the LGBTI (lesbian, gay, bisexual, trans and intersexual) community’s newfound freedom to gather could bring segregation of non-heterosexuals and the formation of ghettos within this diverse collective.

“Olaces where LGBTI people can express themselves freely and without pressure are necessary,” Isbel Díaz, an activist with Proyecto Arcoíris (Rainbow Project), which defends sexual rights, told IPS.

Bt she said these venues aren’t likely to help combat homophobia because they are recreational spaces, rather than platforms for activism.

“They don’t arise autonomously from the LGBTI community but are an attempt to cash in on the legend that the ‘pink market’ is prosperous,” Yasmín Portales, another member of Proyecto Arcoiris, told IPS.

Portales said the police harassment has been reduced. But she added that there is a growing public backlash against clubs that some people feel are “indecent.”

“We went from repression in the name of illegality to legalisation and visibility, but without a broad public debate or discussion,” the activist said.

The shows draw a diverse public. But what they have in common is that they can afford the entrance price of beween three and five CUCs (a currency equivalent to one dollar) in a country where the average monthly salary of a public employee is 20 dollars and the government employs over 80 percent of the workforce.

Because of the lack of spaces for promoting and publicising the shows, the organisers rely on text messages, flyers handed out on the streets, or word of mouth advertising.

Other bars, discotheques and restaurants declare themselves “gay friendly”.

The state-run Escaleras al Cielo is one of the most popular lesbian bars, while the prívate Le Chansonier and Esencia Habana have special “sexual diversity” nights.

Options are opening up, although fewer, even outside of the capital.

“We went from repression in the name of illegality to legalisation and visibility, but without a broad public debate or discussion.” – Cuban activist Yasmín Portales

For example, La Vaca Rosada is a very popular prívate bar-restaurant in the coastal tourist resort of Varadero, 150 km east of Havana.

“Although it is a tourist area, this is still basically a rural town and there aren’t as many gay venues as in Havana,” Ever Cano, the owner of the bar-restaurant, told IPS. He explained that he had to start out by sensitising his 14 employees with regard to respecting all different kinds of people and couples.

Cano describes his locale, which operates on the rooftop terrace of his home, as gay friendly. The pop decor is clearly gay-themed, with coasters printed with messages against homophobia and a menu offering drinks with names like “Drag Queen Mojito” and “Vodka Travesti”.

“I come from a generation that suffered a lot because of the many ways gays were mistreated in Cuba,” said the 52-year-old businessman, who is also a tour operator in a state agency. “I was fired from my job and kicked out of high school because of my sexual orientation. Today I’m happy to be able to talk openly about what used to be a taboo issue.”

Cuban culture is heavily machista, sexist and homophobic, and verbal and even physical attacks against LGBTI people were common in public in the first decades after the 1959 revolution.

Institutionalised discrimination has been gradually phased out since the early 1990s, when homosexuality was decriminalised. But activists say the police still frequently fine non-heterosexuals under the charge of “public scandal” if they are effusive when out in public.

A study on Cuban cross-dressers, published in 2011 by journalist Marta María Ramírez, says the first wave of “gay fiestas” occurred between 1994 and 1997, when they were organised as clandestine affairs in open spaces, fields or car parks on the outskirts of Havana. The police were always on the lookout, she reported.

“Although they were not exactly illegal, different pretexts were used to clamp down on them. But they emerged again around 2004 and 2005, very sporadically and isolated both in time and space,” the reporter wrote in the blog TransCuba.

A campaign in favour of respect for freedom of sexual orientation and gender identity carried out since 2007 by the governmental National Sex Education Centre (CENESEX) brought greater visibility to the LGBTI community and gave a boost to some demands.

In 2010, CENESEX reached an agreement with the Ministry of Culture for regular performances by drag artists in the Las Vegas cabaret in the capital, which promote safe sex and prevention of sexually transmitted infections.

Las Vegas hostesses Margot and Imperio – the stage names of cross-dressers Riuber Alarcón and Abraham Bueno – sprinkle messages on condom use in the shows they present.

Statistics on the LGBTI community in Cuba are scarce. But in a 2011 survey on HIV/AIDS prevention conducted by the national statistics office, ONEI, 6.3 percent of male respondents between the ages of 12 and 49 said they had had sex with other men. Of them, 49.6 percent reported that they had a stable partner.

The survey also indicated that 80 percent of those living with HIV in Cuba are men, and that 86 percent of HIV-positive men have sex with other men.

Male and transgender prostitution are common in these venues, where sex tourism is also growing, catering to mainly older gay foreign men who come to this country to have sex with other men.

Alberto Roque, a medical doctor and gay activist, identified other kinds of latent discrimination in the growing number of gathering places for the LGBTI community, which he said were frequented by predominantly white gay men of means, while lesbians and transsexuals were less visible.

Black feminist Anabelle Mitjans created the Project Motivito, for lesbians and transgender persons who can’t afford to go to night clubs. The initiative organises parties and events for non-heterosexuals in prívate homes and public spaces, which are free of charge.

“The gay world is becoming a hard to afford space of capitalist consumption, like a ghetto where lesbians aren’t a source of profit,” Mitjans, a university professor who identified herself as “queer”, told IPS.

Mitijans defends the need for LGBTI venues, but she also hopes for a society where she and her partner can go out and have a good time, without suffering discrimination, anywhere they please.