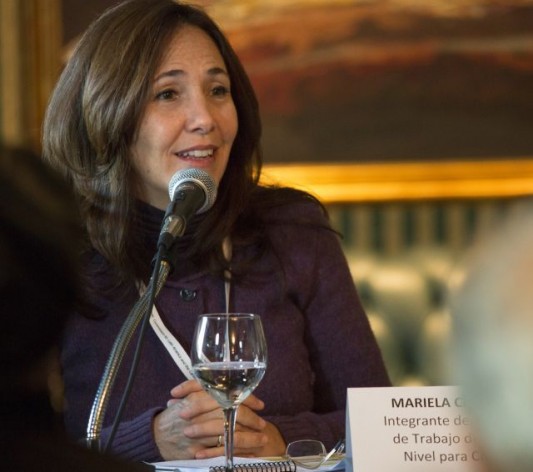 Mariela Castro speaking at the conference on population and development in Montevideo. Credit: David Puig/UNFPA

MONTEVIDEO, Aug 15 2013 (IPS) - Latin America and the Caribbean cannot hope to have truly advanced, progressive policies in sexual and reproductive health as long as women do not have the right to decide to interrupt their pregnancy, says Mariela Castro.

“To me it is shameful that many women in the region are still forced to decide between prison or death,” said Castro, director of Cuba’s National Centre for Sex Education (CENESEX) and a member of the high-level task force for the International Conference on Population and Development.

The sexologist, who is the daughter of Cuban President Raúl Castro, said there is a “witch hunt” against women in Latin America and the Caribbean by governments that describe themselves as democratic.

Castro sat down with IPS during lunch break at the first session of the Regional Conference on Population and Development in Latin America and the Caribbean, which is being held Aug. 12-15 in Montevideo, the capital of Uruguay.

As director of CENESEX, Castro has led campaigns in Cuba against the spread of HIV/AIDS and to advocate the rights of the lesbian, gay, bisexual, and transgender (LGBT) community.

Thanks to a draft law she sponsored, Cuba became the first country in the region to offer free sex reassignment surgery to transgender people.

Q: What do you think are the biggest advances in Cuba in recent years, in sexual and reproductive health and sex education?

A: Very important work has been done, starting with the efforts of the Federation of Cuban Women in the 1960s. In 1965, abortion began to be provided free of cost by the national public health system, carried out by experts in the health system’s institutions, with the woman’s consent.

Abortions were available in Cuba before the (1959) revolution, but the procedure was very expensive and was practiced in private clinics. Unsafe clandestine abortions were a major cause of maternal mortality.

So the Cuban state decided to make it a service provided by the public health system. There is no law on abortion. It was established by a Public Health Ministry resolution.

The National Family Planning Programme was created in 1964 and the National Sex Education Programme began to be designed in 1972.

When the Communist Party of Cuba held its first congress in 1975, sex education was established as a state policy, with the primary responsibility put on the family and schools.

In 1988 and 1989, the National Centre for Sex Education was created under the Public Health Ministry.

Q: What is the situation today in Cuba in terms of respect for sexual diversity?

A: Cuba, like the rest of the countries in the world, reproduced the homophobic system that cultures and the sciences also helped impose.

The medical sciences imposed the view that homosexuality was an illness and that these people should undergo therapy aimed at turning them into heterosexuals.

It wasn’t until May 17, 1990 that the World Health Organisation (WHO) ‘depathologised’ homosexuality. My country was homophobic like the rest, but what is said about Cuba in that sense is exaggerated.

The idea of a project based on the principles of social justice and equality and solidarity among human beings created the foundations for us to continue the struggle against discrimination, within the revolutionary process itself.

In January 2012, when the Communist Party conference was held, the objective of fighting all forms of discrimination, including on the grounds of sexual orientation and gender identity, was included for the first time.

Q: What can Cuba contribute to the rest of Latin America and the Caribbean?

A: Last year, Cenesex organised a meeting of experts on sex education from Latin America and the Caribbean with the aim of sharing experiences and forging alliances to help push these issues forward in the region, and we approved a declaration.

We also want to exchange materials and information. We keep a close eye on new legislation in the region, so that we can also incorporate elements that can be useful for us.

Q: Very important steps towards equal marriage have been taken in Latin America. What’s the situation in Cuba?

A: As a Latin American, I feel very proud that Argentina, Uruguay and the Federal District of Mexico City have legalised the right (to same-sex marriage). I think it’s fascinating. What I am constantly advocating is for this to also happen in other countries, including Cuba.

The thing is that in Cuba, marriage is not considered very important, since most couples just live together, and they enjoy the same rights as married couples.

So the LGBT movement doesn’t put an emphasis on this; they are more interested in defending their economic rights. But if we’re going to talk about rights, we have to talk about the same opportunities, including marriage.

Q: What role should the media play in sex education?

A: I advocate an ongoing strategy of education, accompanied by constant communication. We are training journalists, communicators and artists all the time.

One example that showed that the media are not prepared to deal with an issue was what happened in 1988, when the first free sex change surgery was performed in Cuba.

The doctors who did the operation presented their experience at a congress. A journalist who was there published it in his newspaper, which triggered a debate. Many people sent letters to the government saying it was appalling.

The Health Ministry, which didn’t have the tools to defend itself, decided to suspend the operations, and we had to wait 20 years.

Today we’re the only country that has a strategy for integral care for transsexuals, with free specialised sex services to carry out the transformations that they need in their bodies to bring them into line with their gender identity.

There is also an overall strategy to modify policies, awareness and laws, so that transsexuals are respected.

Q: What are the expectations for this conference in Montevideo?

A: It’s very important for our region to at least reach agreement on a declaration where (the countries) commit themselves to respect, protect, and comply with sexual and reproductive rights.

We want this conference to take a stance in favour of access to quality information, education and services, so that all young people have universal access to sex education provided within and outside of school.

We cannot accept crumbs when it comes to rights. We cannot expect advanced or progressive policies in health if we don’t mange to establish agreements on issues like these.

Q: And with regard to abortion?

A: My hair stands on end when I see that in our continent only Cuba, Guyana and now Uruguay have laws that respect women’s rights to decide about their bodies in situations involving reproductive health, such as the voluntary interruption of pregnancy.

To me it seems like a witch hunt. I think it is shameful that many women in the region are still forced to decide between prison or death, or that countries that define themselves as democratic talk about democracy without having advanced on issues like these.