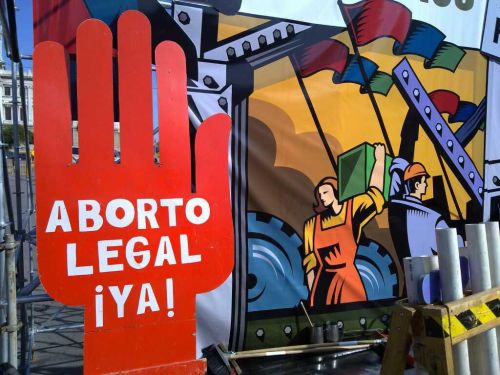 “The law has many gaps, and satisfies no one,” says activist Martha Aguñín. Credit: Hacelosvaler.org

MONTEVIDEO, Oct 18 2012 (IPS) - The Uruguayan Congress passed a law Wednesday decriminalising abortion, making it one of the few countries in the region where abortion is allowed in cases other than rape, incest, malformation of the fetus or danger to the mother’s life. But activists who backed the bill are not pleased with modifications introduced in the final version.

“We see this law as minimal; it is not what we were hoping for,” Martha Aguñín, spokeswoman for Mujer y Salud en Uruguay (MYSU – Women and Health in Uruguay), told IPS.

“It has many gaps, and satisfies no one,” added Aguñín, whose non-governmental organisation is leading the campaign “Legal Abortion – Uruguay; They are your rights, demand that they be respected!”

The law decriminalises abortion in the first trimester of pregnancy. But it will only be permitted in cases in which the pregnant woman complies with certain requisites.

Under the bill approved by the Senate Wednesday, which is set to be signed into law by President José Mujica, the woman seeking an abortion must first explain to a doctor the “economic, social, family or age difficulties that in her view stand in the way of continuing the pregnancy.”

The doctor will immediately refer her to an interdisciplinary panel made up of at least three professionals: a gynaecologist, psychologist and social worker.

The panel will advise her on the content of the law, the risks posed by the procedure, and the alternatives to abortion, and she will be given five days to mull it over.

If she doesn’t change her mind after the five-day waiting period, she will be allowed to have an abortion, without any further necessary steps, in one of the country’s health clinics or hospitals.

But Aguñín criticised this system, saying the panels would act in practice as a sort of “tribunal” or court.

“When women make a decision of this kind, we don’t need to be instructed to reflect on it, because we already do that in a conscious, adult, responsible manner,” she said.

“We have the right to decide when and how we will have children, and how many, without having to go in front of a tribunal that orders us to think about it for five days,” she said.

The activist explained that the new abortion law was not the one civil society groups wanted, but was the only one possible, as it was the result of negotiations and concessions made by the lawmakers of the left-wing Broad Front coalition, which has governed Uruguay since 2005, who have a majority in Congress.

A similar attempt failed in 2008, when the legislature approved a law on “the defence of sexual and reproductive health” but President Tabaré Vázquez (2005-2010), the leader of the Broad Front at the time, vetoed the articles that legalised abortion.

Vázquez, a prominent oncologist, argued at the time that abortion was “a social ill that must be avoided,” and said the bill could not deny “the reality of the existence of human life in the gestational state.”

But this time around, President Mujica has said he will not interfere and will sign the bill.

After a debate that dragged on for over 10 hours, the law was approved with the votes of 16 Broad Front senators and one senator of the centre-right National Party, in the 31-member Senate. The Chamber of Deputies had already passed the bill.

The new law, in practice

MYSU also expressed doubts about the implementation of the new law, given the shortcomings of the Uruguayan health system.

“We have found that women who live in some places in the interior, like Río Branco (a small town in the northeast of the country), do not have access to the services or the referral teams on sexual and reproductive health. They have to travel 80 km to receive attention and advice” in a larger city, said Aguñín.

“The system does not offer the conditions, under these urgent timeframes, for women to have an abortion in safe conditions,” she contended.

But Ana Labandera, president of the organisation Iniciativas Sanitarias (Health Initiatives), made up of health professionals who support the new law, was more upbeat.

“It is a law that can be perfected,” she told IPS. “It has a few problems, but it is a big stride anyway towards guaranteeing the rights of women, and allowing them to complete their decision process about having an abortion within the integrated national health system.”

With regard to the implementation of the law, Labandera said there are now trained professionals in different parts of the country, thanks to articles of the 2008 law on sexual and reproductive health that were not vetoed by Vázquez.

“These services are starting to function, or are already functioning, and this will clearly make it possible for the professionals to become qualified to deal with the entire process involved in abortion cases,” she said.

“The platform, the infrastructure, has already been put in place so that this law can be a complementary part of the services that are already provided,” she added.

The international human rights group Médicos del Mundo (Doctors of the World) celebrated the new law, describing it as a “positive precedent” for all of Latin America.

In a statement, the organisation said the law was a step forward for women’s health, from a regional perspective, and added that it would closely follow its implementation.

Abortion had been legalised in Uruguay in 1934, during a time of new liberal ideas. But that change provoked controversy, and in 1938, abortion was made a crime under the penal code. Since then there have been eight unsuccessful attempts at reforming the law, the last of them in 2008.

It is estimated that more than 30,000 abortions a year are practiced in this South American country of 3.3 million people. Of every 10 pregnancies, three or four are interrupted, Labandera said.

According to figures provided by MYSU, the highest rates of abortion are in Latin America and Africa, where the practice is highly restricted in nearly every country, and where many women have unplanned pregnancies.

In this hemisphere, abortion on request is currently only legal in Cuba, Canada, the United States, Puerto Rico, three countries of the French Antilles, French Guiana, Guyana and Barbados. And in 2007, the Mexico City government made abortion legal in the capital.

In the rest of heavily Catholic Latin America, it is only allowed under narrow circumstances, such as cases of rape, incest, a malformed fetus or danger to the mother’s life. And in Nicaragua it is illegal under any conditions.

In a survey carried out in June by Radar, a Uruguayan polling firm, 51 percent of respondents said they were in favour of decriminalising abortion, 42 percent said they were opposed, and the rest did not express an opinion.

The Public Health Ministry reported that between 2007 and 2011, there were no deaths resulting from illegal abortions, although civil society organisations express doubts over that claim.

So far this year, two women, ages 28 and 32, died in public hospitals as a result of complications caused by medical abortion brought on by misoprostol, a drug used to treat ulcers that also causes early abortion.