CARACAS, Mar 10 2010 (IPS) - Although most of the governments in Latin America today are described as progressive, abortion is only legal in one country, while in five countries it is banned under all circumstances, even when the mother’s life is at risk. 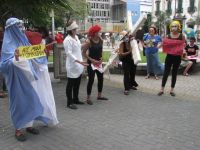 But draconian laws against abortion that allow very few, or no, exceptions have failed to prevent the average abortion rate in the region from reaching 31 per 1,000 women, two more than the global average, and higher than any other region.

Such laws have simply forced the practice underground, making unsafe abortions the second leading cause of maternal mortality in the region.

“Machismo plays a key role. Our societies are so patriarchal that it just isn’t that difficult to deny that right,” Uruguayan sociologist Moriana Hernández told IPS. “If there was social awareness about equality, it would be much more costly for progressive governments to deny rights linked to gender equality.

“It’s easy to negotiate over the bodies of women because of that patriarchal influence,” said Hernández, who heads CLADEM’s (Latin American and Caribbean Committee for the Defence of Women) campaign for non-sexist and non-discriminatory education.

So abortion has become a bargaining chip between government leaders and conservative sectors, even though everyone knows that abortions are commonly practiced in the region.

There are more than four million illegal abortions a year in the region, linked to over 4,000 avoidable deaths. And in some countries, like Argentina, there are nearly as many abortions as births.

In the view of Hernández and other analysts, setbacks to or the lack of progress with respect to women’s right to choice are the result of a fundamentalist offensive by the Catholic Church to keep Latin America a land free of abortions – legal ones, at least.

“The Church has always been on the watch against abortion, but now it has become an issue that irritates it beyond all measure – and not only abortion but also sex education, when actually there are no new, or radical, proposals being set forth,” said Hernández.

Over the last decade, Latin America has shifted to the left. At the start of 2010, there were 11 countries with governments seen as progressive: Argentina, Bolivia, Brazil, Chile, Cuba, Ecuador, El Salvador, Nicaragua, Paraguay, Uruguay and Venezuela; five with administrations considered rightwing or centre-right: Colombia, Costa Rica, Honduras, Mexico, Panama and Peru; and two with centrist governments: Guatemala and the Dominican Republic.

But at the same time, a total ban on abortion, even in cases of rape or a threat to the mother’s life, was adopted in Nicaragua in 2006; in Uruguay a presidential veto overruled the legalisation of abortion in 2008; and in the Dominican Republic, the right to life from the moment of conception was enshrined in the constitution in 2009.

In fact, the best news on the right to choice came from two countries governed by the right: in Colombia, the Constitutional Court legalised “therapeutic” abortion in cases of rape, incest, fetal malformation or for the life of the mother in 2006, and in Mexico, first trimester abortion on demand was legalised a year later in the capital city – albeit by the leftwing Party of the Democratic Revolution’s (PRD) majority in the local assembly

However, the five Constitutional Court magistrates who voted in favour of the verdict in Colombia were immediately excommunicated by the Church.

And the law making abortion legal in Mexico City triggered a “furious backlash” by the Church, which has prompted 17 of Mexico’s 32 states to adopt even stricter anti-abortion laws, said Hernández.

Argentine anthropologist Rita Segato, a researcher at the University of Brasilia, attributes the Church’s fervor to reasons other than the defence of life. “If it really cared, the Catholic hierarchy would be fighting on other fronts with the same vehemence, defending life,” she argued.

“Its concern at this point is to mark the permanence of its influence” over states in the region, and thus it is caught up in a kind of competition for authority with the feminist movement in Latin America, she said in an interview.

“I’m still the boss here and I make sure that my ideological profile is reflected in the laws, and I am going to win,” is the message from the Church leadership, according to the anthropologist.

The renewed push for even tighter restrictions on abortion “is a war of influences,” she said.

In Segato’s opinion, because the laws criminalising abortion have a purpose other than the stated one, they end up being ineffective in their supposed aim. “Catholics, non-Catholics, evangelicals – women from all these groups are having abortions every day, because they don’t feel it is a criminal or ethical offence,” she said.

Hernández said the Church is especially nervous because of the growing and increasingly visible awareness in the region on the importance of the right to choice, “which was unthinkable 10 or even five years ago.

“It has always been a key aim on the feminist agenda, but for years a popular movement aware of its importance was lacking. It was a neglected issue,” she said.

The activist sees the negotiation over women’s bodies in the criminalisation of abortion as linked to the problem of gender violence in the region, which is “huge” despite the fact that the Americas has the only continent-wide treaty on violence against women (the Inter-American Convention on the Prevention, Punishment and Eradication of Violence Against Women) and that every country has laws, in some cases even highly advanced, to fight domestic violence.

“A society that accepts men’s violence against women cannot be asked to oppose a woman’s being blocked from deciding on her pregnancy, another issue involving her body,” the veteran feminist activist reflected.

The fury with which that violence has been expressed and the renewed offensive against any steps towards making abortion legal have picked up as challenges to “patriarchal power” gather strength, said Hernández.

For that reason, it is important to take a deeper look, “because there haven’t only been setbacks.

“There are ups and downs, as shown by the case of Mexico, and there is a risk of oversimplification if we only measure progress by what governments do, without looking deeper, at political and social developments and the action of different movements and interest groups,” she said.

“We have never before seen such a broad debate on the right to abortion, and it is growing day by day,” said Hernández. She added that one result of thise is the combativeness shown by women in the region on the Day for the Decriminalisation of Abortion in Latin America and the Caribbean, celebrated every Sept. 28 since 1990.

Hernández cited Uruguay as an example of the complex nuances of the issue. In November 2008, socialist Tabaré Vázquez of the leftwing Broad Front coalition, whose five year term as president ended Mar. 1, vetoed the legalisation of abortion, one aspect of a broader law on reproductive health, which had been approved thanks to his own ruling coalition’s majority in Congress.

But a focus only on the veto itself ignores other important elements, like the facts that a majority of senators and deputies approved the decriminalisation of abortion; at least 63 percent of Uruguayans are in favour of legalisation, according to opinion polls; and the country’s trade unions, traditionally a very male-dominated area, staunchly supported the law.

There were practical advances as well: the final version of the law maintained the requirement that doctors and health centres must provide information on safe methods to terminate a pregnancy, even if they cannot themselves practice or offer them; and any woman with abortion-related complications must be given medical treatment without questions and without being reported to the authorities.

When progressive presidents like Brazil’s Luiz Inácio Lula da Silva, Argentina’s Cristina Fernández, Nicaragua’s Daniel Ortega or Ecuador’s Rafael Correa seek to ingratiate themselves with the Church and other conservative groups by taking a hard line stance on abortion, they generate contradictions with their own political and social support bases that will become unmanageable for themselves or their successors in the long run, said Hernández.

“Latin American societies are ripe for the decriminalisation of abortion. That is an unquestionable fact,” she stated. However, it is an issue “on which no one is going to budge without being forced to do so, and this also depends on creating a critical mass of men in favour of women’s right to decide.”

What the laws say

Chile, El Salvador, Honduras, Nicaragua and the Dominican Republic ban abortions under any circumstances, with no explicit legal exceptions, even in the case of a risk to the mother’s life.

But in Honduras, although the penal code provides for no exceptions, the Code of Medical Ethics allows termination of a pregnancy if the woman’s life is in danger.

Cuba is the only country in the region where abortion on demand up to the 12th week of pregnancy is legal, as it has been since 1965. And the abortion rate is less than 21 per 1,000 women of reproductive age, 10 points lower than the regional average.

In Argentina, Costa Rica, Paraguay and Venezuela, abortion is allowed to save the pregnant woman’s life. Argentina also makes an exception in the case of women with mental disabilities, while in Venezuela, women who undergo abortions to preserve their honour or that of a spouse or other relative are subject to more lenient penalties.

In Bolivia, Brazil, Ecuador, Guatemala and Uruguay, abortion is also permitted in cases of rape or incest, and Uruguay allows for another exception as well: economic hardship.